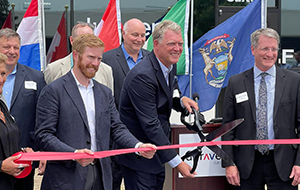 The event featured a tour of the center’s design and prototype labs, airflow testing suites, its state-of-the-art office layout and robust printing capabilities. U.S. Rep. Peter Meijer, R-MI, spoke at the event, which was attended by community, state leaders and excited company employees.

“Duravent is committed to a strong presence in Michigan as demonstrated by our new innovation center in Grand Rapids, and an expanding headquarters in downtown Detroit,” said Simon A. Davis, president and CEO of the Duravent Group. “Our ability to innovate, lead and grow in the HVAC and emerging climate technology categories is largely the result of leveraging the deep engineering talent Michigan has to offer.”

Since 2017, the leadership team has led the organization through several strategic activities, including the acquisition of 100-year-old Hart & Cooley in 2021, which tripled the size of the company. Today, Duravent has 2,400 employees and $500 million+ in annual revenue.

As part of the Grand Rapids Innovation Center launch, Davis and his team unveiled a new company identity – the Duravent Group – with the goal of unifying the company’s culture and its family of established and respected brands, which include several industry leading nameplates.

“The Duravent Group is one team and one company focused on flexibility in manufacturing and distribution while responding quickly and efficiently to customers’ needs. I’m proud of our team culture that embraces innovation and change while always putting our customers first,” Simon said.

The Duravent Group is a global technology leader in the HVAC industry and first-to-market with innovations in venting systems. Founded in 1956, this $500 million-plus company is headquartered in Detroit, Michigan. https://duravent.com/