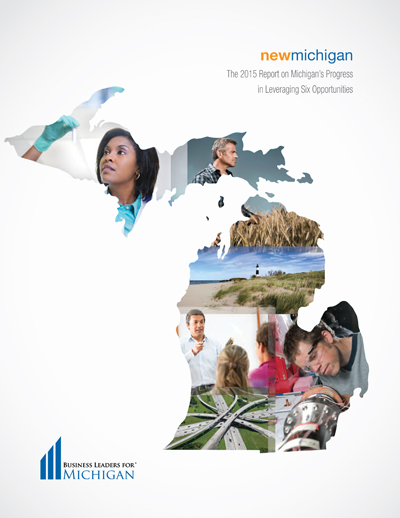 “Michigan has natural assets and strengths capable of driving long-term job, income and GDP growth,” said Doug Rothwell, BLM president and CEO. “But these opportunities are only meaningful if we act on them in smart, aggressive ways. We’re in a fast-paced global race for economic leadership. We must maximize every opportunity we have if we’re going to win.”

Rothwell highlighted his organization’s latest report on each of six key opportunity areas identified in the Michigan Turnaround Plan’s New Michigan strategy as having the best potential to create good paying jobs in the state. “Michigan can be a global leader, but we have to aggressively build upon our strengths,” Rothwell said. “As a Top Ten competitor, our state stands to gain 230,000 more jobs, $14,000 more in average annual earnings, and $36,500 more in per capita GDP. We can’t afford not to get serious about each of these opportunities.”

“We need to keep our pedal to the metal,” Rothwell said. “If Michigan was performing at Top Ten levels, we would not be experiencing any type of wage differential.”

The conference included discussion on how other states and regions are leveraging their key strengths. “Other states have engaged in processes similar to ours as they map out their assets and opportunities and begin to move forward,” Rothwell said. “We must take pages from their playbooks and be aggressive about our future economic growth.”

Highlights of the 2015 New Michigan report include:

• Global Engineering Village: Michigan continues to rank highly for the percent of its workforce engaged in engineering (#2 in the U.S.) and the amount of GDP stemming from this sector (#1). However, our production of engineering grads has slipped from #3 to #5.
• Gateway to the Midwest: Michigan ranks first in the U.S. for imports and exports with Canada, and is #2 and #3 in imports and exports with Mexico. Michigan is below the U.S. average for the number of graduates prepared to work in this industry.
• Higher Education Marketplace: Michigan is ranked among the nation’s Top Ten for earnings, total degrees awarded, total enrollment, and STEM degrees awarded. Unfortunately, Michigan is in the bottom 15 of all states for the amount of state support provided to colleges and universities.
• Natural Resources Economy: Earnings in this sector are above average, as are patents, establishments, and tourism spending. Sadly, Michigan remains near the bottom for GDP and employment in this sector, and is below the U.S. average in the number of graduates produced.
• Global Center of Mobility: Michigan ranks in the top five for patents awarded (#2), and the share of national GDP (#4), earnings (#3), and employment (#3) in mobility industries. However, average earnings in this sector are only slightly above average and the number of auto-ready grads Michigan produces is in decline.
• Life Sciences Hub: Michigan is above average in all economic outputs related to this sector. Michigan ranks in the Top Ten for university R&D.

More on Business Leaders for Michigan and the report is available at www.businessleadersformichigan.com.

Don’t be controlled by fear

Leadership Lessons from the Greats