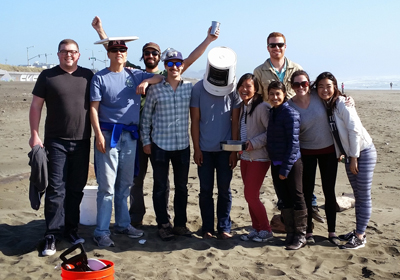 While 3Degrees exists to engage Fortune 500 companies in renewable energy and carbon offsets to improve the health of the planet, the company keeps close tabs on the health of its team. After all, without a well-tuned engine, there can’t be enough output to make a big enough impact on the globe.

The San Francisco-based Certified B Corporation does this in two big ways (and many small ones) – through its company-wide volunteering and giving program known as 3DGives!, and through its FlexPTO unlimited paid-time-off plan, which uses the honor system to facilitate vacation and personal time for 55 full-time and more than 100 part-time employees.

“We are extremely democratic in our decision-making,” says CEO Steve McDougal, who co-founded the company in 2003 (it took the 3Degrees name in 2007), driven by his own personal passion to improve global environmental conditions. “As a mission-driven company, it’s an important part of our interview process to find people who share a passion for that mission.”

The company became a B Corp in 2012, a legal structure that forces a company to consider not only shareholders, but other stakeholders such as employees or the community.

Becoming a B Corp pushed the company to examine whether it was operating consistently in every regard. “We found ourselves to be really strong as it related to employees and environment, but we weren’t that strong in the community category,” McDougal recalls.

That inspired “more mechanisms to encourage people to take paid time off to participate with community events – cleaning up a beach or tree planting” or other similar efforts.

That was for Earth Month, which fits in well with the company’s mission. But 3DGives! is a year-round perk to keep all team members on track with community connection.

McDougal knows first-hand how important it is to align your personal passions with your work. The son of a Danish mother who was recycling in the 1970s before most people, McDougal loves going to work every day motivated to make the planet healthier. That motivation shines through in company initiatives, which are designed to help each person be the healthiest, happiest person and colleague, they can be.

Another way the company customizes its employee experience is through its FlexPTO program, which essentially gives people carte blanche to choose their time off, trusting that no one will abuse the option.

“It felt really old world to be giving people a specific balance of paid time off and then require a strict accounting of it,” says McDougal. “To tell somebody who’s doing a great job, who wanted to take more time off, that they couldn’t because they exceeded their limit,” just didn’t feel right.

The result has been incredible, he says. People take more or less the same amount of time off that they used to, but with the flexibility that comes with an honor system guiding people who respect one another and are tied into the same mission and purpose.

Soroye, who joined 3Degrees in June of 2014, says she took approximately three weeks of vacation last year. As the mother of three who was hired during her last pregnancy and received three months of paid maternity leave, she has an easy flow with her superiors. When a child falls ill, they understand that she will do her best to work from home, and it may or may not be a full day of focus.

“It’s really nice to work in a place that trusts you to act with integrity, and that you may need to take a little extra time so the next day you can bring your best self to work,” she says.

3Degrees’ work culture and employee practices are gaining accolades. The company was named a winner in the 2015 San Francisco Bay Area’s Best and Brightest Companies to Work For competition.

Unlimited flex time is just one component in a changing workplace that helps employees feel appreciated, encouraged and determined to stick around, according to Deloitte University Press’ 2015 Global Human Capital Trends report.

The report asserts that “one of the biggest needs in the new world of work is the need to rethink how organizations manage, evaluate and reward people. …Today’s workers have a new focus on purpose, mission and work-life integration.”

Last year at one monthly “Huddle,” 3Degrees leaders lauded the team for sealing the deal on a renewal with a big client – and they pointed out during their company wide meeting that every person on the team took vacation during the campaign, Soroye notes.

“There’s a sense of yes, you’re going to work really hard, and you also have a life and the two can coexist,” she says. “This is a workplace environment where employees can bring their best selves to work and bring their talents to help the organization flourish.”

Note: For more on San Francisco-based 3Degrees, visit www.3degreesinc.com. Information on the 101 Best and Brightest Companies to Work For program is available at www.101bestandbrightest.com.