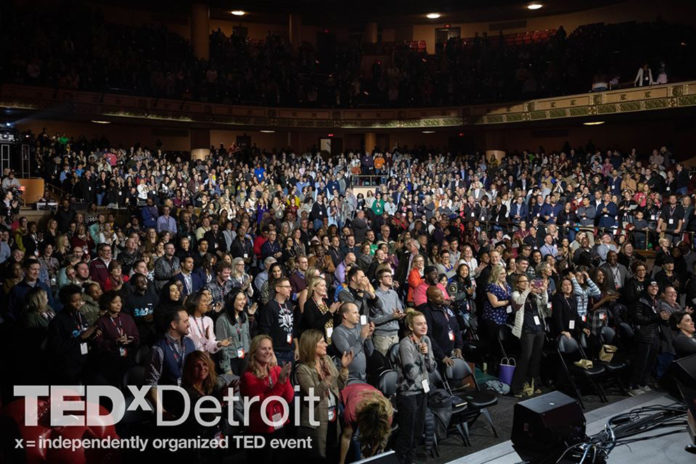 TEDxDetroit aims to entertain, amuse and, most importantly, inspire the people of all ages, backgrounds and experience levels who attend the annual event in the Motor City.

As organizer Charlie Wollborg always says at the end of the 15-minute motivational and inspiration speeches: “Keep in mind, the ass most need of kicking is probably the one you’ve been sitting on.” The 2019 version offered lots of variations on that theme, giving the packed crowd at Detroit’s Masonic Temple venue plenty to take home and mull over.

Here are highlights of some of the talks that were given Wednesday. Videos of the talks will be online soon. If you cannot wait that long, check out the the Twitter feed that picked up some of the best moments are available.

• Melissa DiVietri: The champion of people with disabilities reminded the audience that when you’re told “no,” whether as an individual or a business owner, that only means no at that moment. You can make change, just like when she was told as a child that she would never walk on her own. But yet there she was up on stage, strutting around and talking about dancing at the club. Another key takeaway from her message was the idea that “If It doesn’t matter five years from now, it shouldn’t matter (to you) five minutes from now.”

• Hajj Flemings, wearing distinctive white glasses, broke down how he created programs to help small businesses grow, particularly online. He reminded people that they need champions in their life as well as to champion people, especially those who believe in your mission and want to see you succeed. He earned points from TEDxDetroit fans when he booked out of the Masonic and to the airport in record speed, keeping his momentum going.

• Luis Resto, the musician who won a Grammy with Eminem on his “Eight Mile” songs, talked about the importance of creating your own soundtrack and performed his speech to music. He definitely was one of the grooviest performances in that he wasn’t even on the bill as a music performer.

• Tracie Baker dismantled the belief that what you throw away or flush has little or no effect on the water system. She reminded the audience that what we put in our waterways not only impacts us as humans but all of the life living within, and the more we contaminate the water, the worse our collective lives will be.

• Jeff Ponders talked about how he grew as a marketer and as a person when he focused on bringing his many sides together in his business world. Jazz helped him improvise and think on his feet, something his clients appreciated. “I spent so much time on what I wanted to have and what I wanted to do, I didn’t invest in who I wanted to be. I was trying so hard to be Batman, I forgot what it was like to be Jeff.”

• One of the most moving talks was done off the cuff by Najah Bazzy. The nurse and nonprofit founder of Zaman Humanity had the audience simulate a heartbeat – then went on to tell a story of how she held a human heart in her hands at a doctor’s request to help save a man’s life. From that life-changing experience, she went on to focus on the things in life that really matter: How we treat one another on a daily basis. “If you see an injustice, you fix it with your hands and, if you can’t, you try your hardest to condemn it with your heart,” she told the crowd.