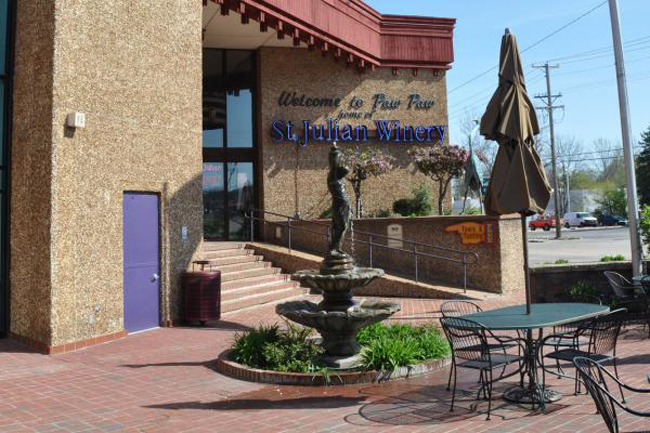 Paw Paw, Mich.-based St. Julian Winery doesn’t do a ton of business on the global market, focusing largely on its domestic shipping.

Chief Operating Officer Kyle Dekema said while the winery has “never really pursued” international markets, some business has, nevertheless, come their way, including some from customers in China.

“It’s really an insignificant piece of our business as a whole,” said Dekema, who said the winery’s dealings with China, in particular, started about eight years ago. “They peaked in 2015, but it’s fallen off since then. When it shows up … we’re happy to do it.”

While it may not be a big market opportunity for St. Julian, many of Michigan’s 125 wineries have been successful in selling their products outside of Michigan. Some get their wines onto the shelves of stores in other states, while others ship products directly to customers outside Michigan.

The international market, however, has been a tough one to crack.

Planning is key
Part of it has to do with planning.

“Wineries usually have to plan a couple of years in advance for how much production they’ll have, and a lot of times they only produce enough for the domestic market,” she said. “With something like beer, production can happen as the demand increases.”

Cost is another factor.

“Typically other countries have much more competitive pricing,” VanDriel said. “Michigan wines tend to be pretty expensive in the market, so there is a limited market. Because of that it has been somewhat difficult for Michigan companies to export.”

States like California do better internationally than Michigan because they have been making wine longer and are more efficient, with higher production rates and lower price points, she said.

Total U.S. wine exports totaled almost $1.5 billion in 2018, according to data from the U.S. Census Bureau. Michigan’s exports accounted for less than $600,000 of that.

It takes time, money
Michigan wineries interested in exporting also have to invest a lot of time and money on research.

“Companies have to do research to make sure that they’re getting into the right markets, and once they are in that market, they have to make sure they’re targeting the right customers,” VanDriel said.

The top overall export market for U.S. wines is Canada. For wines produced in Michigan, the top market changes from year to year. In 2018, Belgium was the state’s top export market. Other top markets for the state include China, Japan, and Denmark.

China could prove to be a key importer of Michigan-produced wines.

“China is really growing as a market, and we’ve been seeing a lot of demand for Michigan wines,” VanDriel said. “We haven’t really seen the exports grow too much yet to China, but we’ve been hearing a lot of buyers are interested in it.”

There’s value in fruit
Fruit wines are in high demand in China, which is good for Michigan producers.

“Michigan grows a lot of fruits, and a lot of our wine has fruit,” she said. “The cherry wines are very popular in China, so we’re hoping to see increases in that.”

Chateau Grand Traverse, a family-owned operation and northern Michigan’s oldest winery (it was founded in 1974), produces several cherry wine products from its home in Traverse City.

For a while, the winery threw its products into the global ring, although it no longer does so, giving up its license to distribute internationally.

“We used to do some international distribution in China,” said Megan Molloy, marketing coordinator for Chateau Grand Traverse. “Our cherry products were extremely popular over there when they first came out.”

The winery may potentially be interested in jumping back into the international market at some point in the future, but there are currently no plans to do so, Molloy said.

Even so, the Department of Agriculture and Rural Development is seeing growth in other Asian markets, including South Korea and Japan, and VanDriel says there is hope that trend will continue.

Canada could be a player
Canada has the potential to become an important destination for Michigan wines.

“Their alcohol market is structured quite a lot differently than the U.S. market,” she said. “But that market is starting to open up quite a bit. We’re hoping in the near future that Canada will become a bigger player for Michigan wines, especially due to the proximity.”

“The Michigan wine industry is doing a lot to try to put Michigan at the forefront of the U.S. wine industry and become more competitive with states like California,” VanDriel  said. “More companies are cutting down costs and Michigan is becoming more reputable as a wine market.

“There’s lots of opportunities, and we’re here to help them be aware of the challenges that might occur.”

Kaley Fech of Capital News Service contributed to this report. See the full story at
http://news.jrn.msu.edu/2019/04/michigan-wines-trying-to-crack-global-market-look-to-china