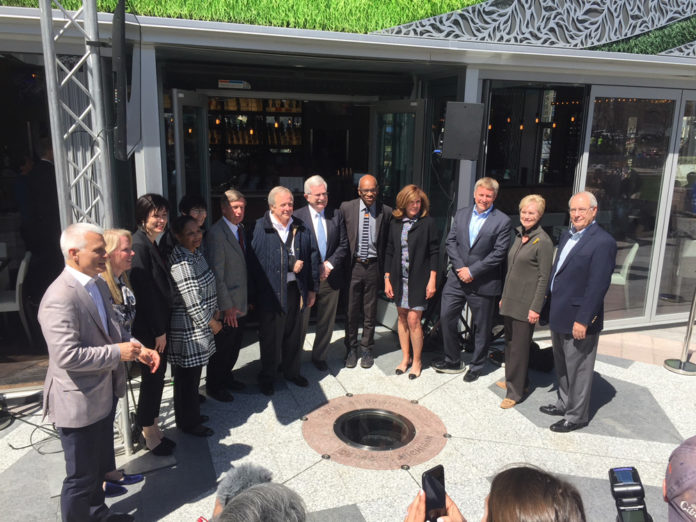 Of Michigan’s cities, Detroit has experienced the greatest upheavals and, in turn, the greatest renaissances. One way the city, its supporters and its institutions are honoring that hard work is through new monuments and plazas to highlight Detroit’s perseverance.

Recently, Detroit celebrated two events to mark the addition of an outdoor plaza in Campus Martius and the addition of a new sculpture at one of the city’s most revered and oldest churches. Both events were well attended and featured comments from officials about the spirit and pride people feel for the city as it works toward rebuilding, reviving and honoring its history as well as its future.

On Sunday, April 29, 2018, Historic Trinity Lutheran Church near Eastern Market unveiled a special piece of sacred art to honor the Reformation and the City of Detroit. The landmark Gothic cathedral in the heart of Detroit dedicated a 12-foot-tall bronze sculpture of Martin Luther outside of the church to honor both the 500th Anniversary of the Reformation and the courage, perseverance and spirit of the people of Detroit, officials said.

The bronze statue features Martin Luther nailing his 95 Theses to a church door while a 6-foot-spray of 95 bronze doves rises skyward over his head. The artwork, created by Canadian figurative artist Timothy Schmalz, took three years to acquire and complete and required a uniquely engineered base to balance and install. It joins a second Schmalz sculpture, Homeless Jesus, in front of the church.

On Monday, April 30, 2018, the Downtown Detroit Partnership revealed a new plaza that showcases the city’s unique “Point of Origin” and marked the 15th anniversary of the groundbreaking for Campus Martius Park.

The event also included the unveiling of a granite wall inscribed with the founding members of the Detroit 300 Conservancy, who helped in the creation of Campus Martius Park.

Edsel B. Ford II, former chairman of the Detroit 300 Conservancy Board, spoke to the crowd with a sling on his arm, the result of a shoulder surgery. Although he was recovering, his spirits seemed high as he helped show off the newly refurbished Point of Origin plaza.

“Campus Martius Park has exceeded all expectations. It stands as a witness to who we are as Detroiters. A place where we can gather and celebrate all that our community offers,” he said.

This is the first of many such renovations and refurbishments on existing parks, officials said. Detroit also plans on adding parks to enrich the community-building ability of public spaces such as these.

Survey of Detroit
The Point of Origin dates back to 1805 when Judge Augustus B. Woodward was appointed to supervise the planning of Detroit’s streets and squares with a group of top Canadian surveyors. As the story goes, the team placed their instruments on top of a large stone in Detroit’s central core and mapping out the city’s streets from that point. The point was marked in the early 1800s by a six-foot-tall granite post at what was the intersection of Michigan and Woodward avenues.

Today, the refurbished Point of Origin has a large gray-and-black plaza that includes the street names of “Woodward” and “Monroe” leading to the granite post, which is now visible under a glass dome. The Point of Origin also now has light inside so it will be illuminated at night, officials said. The Point of Origin is featured in the book, “Secret Detroit,” and tells its history as well.