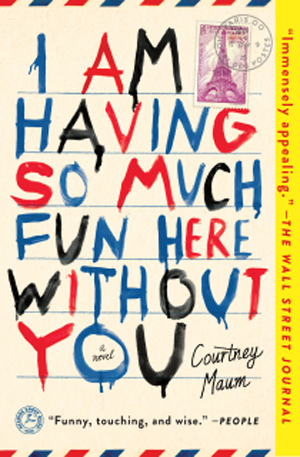 Courtney Maum knows a little something about rejection and having the strength to try something again – and again.

Maum’s debut novel, “I Am Having So Much Fun Here Without You,” seemed like it would never be published. But, lo and behold, about a decade after the New York-based novelist had put it away, it became a huge success.

“I Am Having So Much Fun Here Without You” is described as a reverse love story set in Paris and London. It tells the tale of Richard Haddon, whose marital affair and attempts at redemption allowed Maum to explore questions around love, marriage and whether people truly change.

Maum, who is doing a book tour to launch the novel’s paperback release, will talk about writing, her creative process and more at 7 p.m. April 9 at Literati Bookstore, 124 E. Washington  in Ann Arbor.

“I’ve done a lot of events, but this is the biggest and most formally put together tour that I’ve done for this book or anything else. It’s pretty rare that a debut author would tour for a paperback. But you just didn’t know with a debut if anyone would read it at all or if they’d hate it or if they’d even notice. So this is a neat opportunity for me. I feel a lot more prepared and excited and grateful,” Maum says. Maum says she always wanted to write. “I like making up worlds. I like writing about locations where I don’t live. I always knew I wanted to be a writer since I was a little girl. I’ve been writing stories since I was 6 or 7. I do write nonfiction, but I like to get out of my head,” she says.

Her main message to anyone who attends her book events? Keep going. You never know when something you slaved over will gain traction and become big.

“I wrote it originally 10 years ago before I was married. I think I wrote it when I was 23 or 24,” Maum says. “I was working on another book, but she (her agent) didn’t think it would do well. She asked me: ‘Do you have anything else?’ I said, ‘I have this ancient manuscript in a box, I haven’t looked at it in 10 years.’ She read it and said this is it; this is your debut novel. It just needs to be revised.

“I had just found out I was pregnant; so I had seven months, basically. I tried to revise it, but I just couldn’t work that way. So I rewrote the whole thing from scratch,” Maum says. “It was actually good in hindsight that the book didn’t work the first time because I didn’t have the compassion I have now. I matured.”