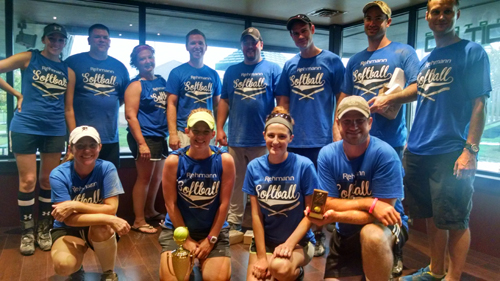 Building a team takes time, effort and – get ready for it – some creativity. You cannot just throw a bunch of adults in a room and expect them to get along effortlessly. Sometimes, it requires a little bit of baseball, some singing and maybe even more dramatic ideas.

That is why Corp! is taking a look at the idea of teamwork and what your crew does to make your office “click.” That is, what makes your organization feel like one group, moving together in the same direction to make good things, good ideas or good services for the Michigan community.

To that end, we found a few examples locally of workplaces that do something unique or special to unite its employees. These places aren’t paying someone to tell them how to do it; these events or projects grew out of a natural inclination to hang out together in a positive way. As a result, the business works stronger, better and in a cohesive way. And that benefits its clients and the greater good, we’d say. One example we’d like to note is of Rehmann. Some background: Since 1941, Rehmann has provided one-on-one financial services to small businesses and middle-market companies throughout Michigan and beyond. It has grown to become one of the largest CPA, business consulting and financial services firms in the Midwest with nearly 800 associates in 20 offices located in Florida, Indiana, Michigan and Ohio.

So how do you keep that big a group of people united? Well, they do it through some friendly competition, said Jenn Couture, Rehmann’s Marketing Manager, who is based in its Troy office. That means a huge softball game that pits two states (Ohio and Michigan) against one another – but in the best way.

Couture described the softball tourney as a “team-spirit” friendly game to unite associates. And, not to brag, but she also wanted to offer a big congratulations to the associates from the Troy office on their big win.

“We do it every year in the summer and our associates have a blast creating team shirts and getting competitive,” Couture said. “We have a firm trophy that we inscribe with the winning office each year and winning associates also receive trophies.”

This is just one example of the kind of team-building efforts some offices have in place. A quick online search came up with many more. There’s Wragge Lawrence Graham’s London office, a law firm that has a company choir. It has early-morning practices, allowing the staff to come in on their own time but still get their work done during regular hours, according to a Newsweek article. Music making “gives people a chance to be themselves at work, and it doesn’t take time away from the family,” Lorna Gavin, head of corporate responsibility, told the magazine.

At Google, engineers take breaks to “jam” with their band in the tech firm’s music room, the magazine further said. Being Google, the music room has everything that could make a band feel cool (even if they don’t sound as good as Pearl Jam or Nirvana) – it features state-of-the-art recording equipment, electric guitars and basses, a piano, drums and a sheet-music library.

So what does your office do to build a team? Share your examples with Corp! and we’ll pull them all together for an article in our “Break Room.” We’d love to see what your business does to pull your workers together in a positive way.