As Robert V. Sicina was thinking about writing a book on decision making and failure, he had one thesis in mind: If you follow all of his advice, you will still fail, but you likely will fail less often.

“I can improve your batting average,” Sicina said with a laugh. “I always say: We are the sum of all of the decisions that we make.”

Laughing about failure? Yes, that’s what Sicina recommends. Because failure is inherent in the decision-making process. Things will go wrong. It’s how you handle the problems, issues and concerns that will arise as a business leader that separates you from the pack.

Sicina, a former Citibank and American Express executive, knows what he’s writing and talking about when it comes to failure. He has spent 15 years teaching about decision making at the American University Kogod School of Business.

Inspired by his students, Prof. Sicina has released a new book, “Learn from Failure: The Key to Successful Decision Making.” In it, he explains what drives failed decisions and links sound leadership and management skills to successful decision making.

“In order to learn from failed decisions, one must understand what causes them,” he notes. “As I uncovered the key drivers of failure in decision-making, I was able to develop prescriptive measures for effectively dealing with them. I share those measures in this book.”

Sicina also has 30 years of experience in various entrepreneurial endeavors. He worked for 14 years in Latin America for Citibank, where he served as country manager of Colombia and division chief financial officer (CFO). He became CFO of Citibank’s entire International Consumer Group and, later, of Citibank’s US credit card business.

Failure is driven by a variety of factors, but many of those come from the decision maker him or herself, Sicina said. Although we think we know what we know, we’re often more irrational than we realize. “We don’t think the way we think we think,” Sicina said. 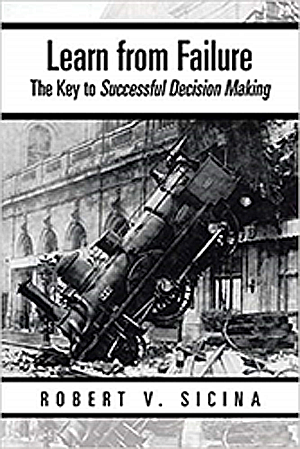 That is because the world is more complex than we can possibly understand.

“The world is a messy place and we try to simplify it in order to deal with that complexity. But the more we do that the more we run the risk of failing. One needs to embrace complexity rather than try to fight it,” Sicina said. “Uncertainty is constant. The future is unknowable, yet we try to determine that in any decision we’re making.”

Sicina said his students and teaching have helped him dissect the decision-making process.

“At the beginning of each semester, I have my students on the first day of the class write down a personal failure that they share only with me. It’s always very interesting the things they share – relationship failures, failure to get on a sports team, even failure to get into the college they wanted,” Sicina said. “Then when we finish going through all of the concepts of the course, we revisit the failure and write an analysis of why they failed based on the concepts of the book to help them.”

Sicina said he tells his students to listen to the wisdom of Pop Music King Michael Jackson: Take a look in the mirror if you want to make a change.

“One of things that we do when we fail in decision making is we point at all the externalities—we point fingers at that and put the blame there,” Sicina said. “But we forget that when we point our index finger our other three fingers are pointing back at us. You have to be introspective when it comes to failure and look at what you could have done to avoid the negative outcome that you had.

“I define failure as taking the circumstances that you’re in and not achieving the desired result after making the decision. It’s going from the current situation to a future situation that doesn’t match the result that you want,” Sicina added. “The fact of the matter is the real world says that you’ll never get all of the information you’ll need to make a decision because of the marginal benefit of gathering all that – the cost exceeds the benefit. Most decisions are made logically with about 80 percent of the information out there.”