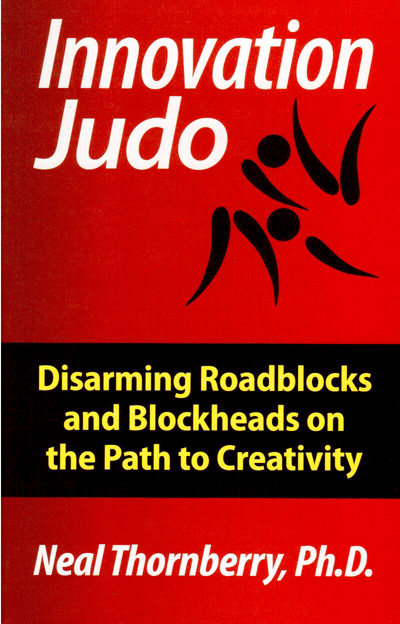 The work of innovative thinkers is why the world has smartphones, laptop computers, toaster ovens and numerous other gadgets and creative approaches to problem solving. Yet groundbreaking ideas aren’t always welcome in the corporate world or within other institutions.

Instead, those who suggest a different approach often find their ideas shot down by co-workers or blocked by an organizational system that is unwelcoming to change, says international speaker and innovation consultant Dr. Neal Thornberry.

“The innovator needs to know how to operate in these less than friendly cultures without waiting for some miraculous transformation in corporate policy,” says Thornberry, author of the book “Innovation Judo: Disarming Roadblocks and Blockheads on the Way to Creativity.” He says there are five innovation “killers” within organizations that people with inspired ideas can expect to confront.

People. Sometime it’s an individual, sometimes it’s a group. Regardless, people often resist innovation, and many times for illogical reasons. “The more rigid people reject innovation simply because they are uncomfortable with the new or don’t want to spend the energy to try something different,” Thornberry says. They may be quick to point out flaws in your ideas.

One way to counteract that, Thornberry says, is to be your own worst critic. Discover those flaws first and highlight them yourself. Then you can address how you plan to mitigate them, thus stealing the critics’ thunder, he says.

Politics. You can usually get around one or two individuals who try to block your idea, but it’s more challenging when the organization is rife with politics. “I hate working in highly politicized organizations,” Thornberry says. “They make work a lot harder and make you spend considerable time on non-value-adding activities.” In fact, Thornberry devotes an entire chapter in his book to “Right Mindedness” so that innovators practicing his seven secret judo skills are not seen as innovating for personal gain or exploitation, but as enablers of company success.

Organizational design. An out-of-whack organizational design usually is not generated on purpose or with malice, Thornberry says. Instead it develops over time, with one well-intentioned move after another leading to unintended consequences. Often the result is a proliferation of controls, along with structures and processes that create barriers to innovation.

When an idea is blocked by layers of decision-making, one solution is to use leverage, Thornberry says. Enlist the aid of a customer who would benefit from the innovation, he says, because paying customers have huge leverage.

Company values. Here the innovator has both a challenge and an opportunity. Many companies articulate their values, but don’t always live by them. “The upside for innovators is that values can be used as leverage for innovation even if they aren’t true,” Thornberry says. For example, if the company declares, “The customer is No. 1,” then it becomes difficult to ignore an innovation that is positioned as being for the customer.

Corporate culture. The corporate culture essentially is how the people, politics, organizational design and values interact. “The greatest challenge to any innovator, and to embedding and sustaining innovation over the long term, is culture,” Thornberry says. To make it even more challenging, often organizations have micro-cultures within the culture. That means, he says, you will need to adapt the use of innovation judo principles depending on which micro-culture you are dealing with at any given moment.

“Innovators throughout history have faced both roadblocks and blockheads on their path to creativity,” Thornberry says. “And so will you.”
But with a little courage and some counterbalancing skills, he says, these challenges can be overcome.

About Neal Thornberry: Neal Thornberry, Ph.D., is the founder and CEO of IMSTRAT LLC a consulting firm that specializes in helping private and public sector organizations develop innovation strategies. A respected thought leader in innovation, Thornberry is a highly sought-after international speaker and consultant. He also serves as the faculty director for innovation initiatives at the Center for Executive Education at the Naval Postgraduate School in Monterey, Calif. He can be reached at www.NealThornberry.com.