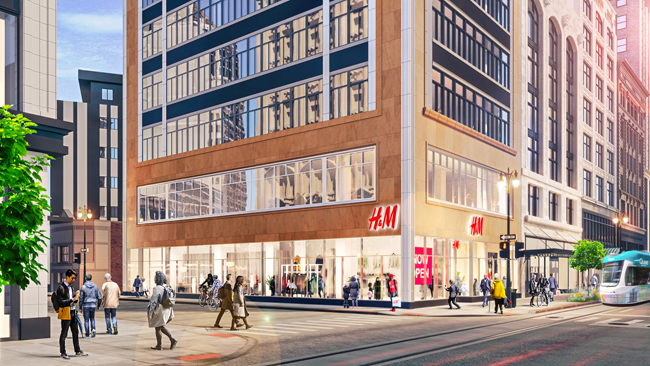 Bedrock Detroit, the real estate arm for Dan Gilbert’s family of companies, announced last week that Hennes & Mauritz Inc. has signed a lease with Bedrock for its first ever Detroit location with plans to open in Fall 2019.

H&M will become the largest retailer in Bedrock’s portfolio, located in a 25,000 square-foot space spanning three Albert Kahn-designed buildings on the west side of Woodward between John R. and Park Ave./Witherell St.

For the first time in decades, a shop that offers men’s, women’s and children’s apparel in one location, will return to the downtown Woodward corridor: The same district that generations of Detroit families frequented for their shopping needs.

“When we started work on the former site of the JL Hudson’s department store approximately one year ago, stories from the public poured in about memories of shopping along Woodward Avenue,” Dan Gilbert, Bedrock Founder and Chairman, said in a statement.

“H&M is one of those flagship retail stores that will take the Woodward Avenue shops to another level. We are hopeful that new memories and experiences will be formed once again along Woodward Avenue. H&M is opening a major Detroit store because it is good for their business,” Gilbert added.

Bedrock’s Retail Strategy
Bedrock has acquired more than 700,000 square feet of retail space in downtown Detroit since its founding in 2011, much of which has been fully restored within historic structures. In the years since, Bedrock has welcomed dozens of local and national retailers to its eclectic portfolio, in which local businesses are thriving next door to some of the nation’s more successful brands.

Three transformational developments are currently underway just blocks from the future H&M store that will add a total of more than 275,000 square feet of prime retail space to the Central Business District. Retail spaces in the Book Tower, Monroe Blocks and the Hudson’s Site developments are designed to attract a mix of local and national brands unmatched in the region, while providing Detroiters with access to much needed neighborhood services.

Bedrock is committed to ensuring downtown Detroit offers opportunities for businesses of all sizes and entrepreneurs of all backgrounds. In 2017, the Downtown Detroit Markets were launched. This initiative activates urban public spaces with seasonal, short term leases to local shops at very affordable rates. Since the program’s inception, more than 100 small businesses seized the opportunity to market and sell their products and learn best practices.

Woodward Shopping History
The historic Woodward shopping district was once home to Detroit’s most prominent department stores, such as JL Hudson’s (once the world’s tallest department store), Himelhoch’s, Kern’s, B. Siegel, and others.

The three landmark buildings that H&M will inhabit at 1505, 1515 and 1529 Woodward were all designed by prolific Detroit architect Albert Kahn.

1505 Woodward has roots in the fashion industry, as it was once home to the Richman Brothers Co., a men’s haberdashery. The building has undergone significant renovations and is now home to offices of International Bancard and Rocket Fiber.

The facades at 1515 and 1529 Woodward recently underwent complete restorations and were once home to the Grinnell Bros. music store and the Sanders candy store respectively.