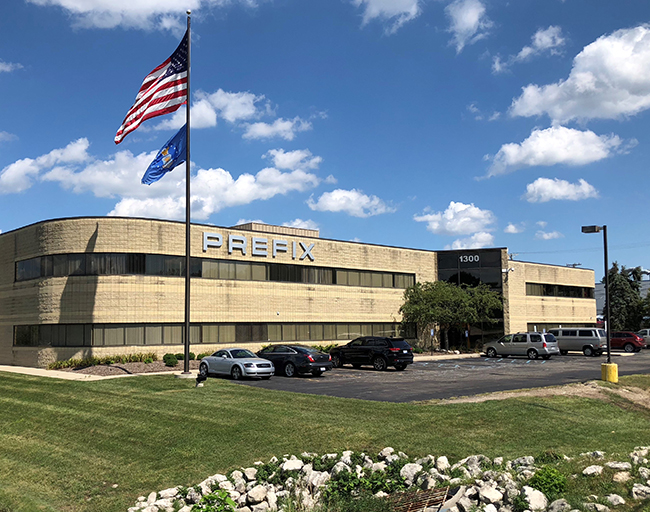 There is no slowing down for Kim Zeile, CEO of Prefix Corporation, but when he is ready, you can bet his succession plan is in place!

Prefix Corporation is a Michigan-based company best known for helping auto manufacturers develop new designs and innovations in the form of full-scale concept vehicles and prototypes. The company has evolved to provide a wide range of important solutions to traditional OEMs, as well as today’s EV (electric vehicle) start-ups and emerging autonomous technology companies. In business for over 40 years, Prefix is a family-owned business with four facilities throughout Michigan and more than 250 employees.

The operative word in the above sentence, though, is family owned business and Eric Zeile remembers when the company began. Eric was just a child when his father, Kim, started the business. He certainly remembers the ups and the downs over the years. Eric recalls Kim saying, “Imagine the music from the movie ‘Rocky.’ Rocky Balboa said two things that really resonated with me. First, ‘All I want to do is go the distance.’ Second, ‘Every champion was once a contender who refused to give up.’”

Today, Eric is the President of Prefix. However, he began his tenure as a kid, doing janitorial and other odd jobs for the company. Even though Eric did not originally know what he wanted to do, he always saw his father’s organization as an opportunity. He began learning every aspect of the business. While his career started with sweeping floors, he worked his way up through the organization doing his part in many different departments.

While the company is a leader in the industry, this is not how Kim defines success. “We measure success based on the lives we touch and the people we take care of,” said Kim. He does not take this responsibility lightly and always says he has two families, the one at home and the one at work. Nora Braniff, Chief Financial Officer echoes his sentiment, “I have been working for family businesses all my life and here it really does feel like a family.”

Though not all of Kim and his wife’s children are involved in the day-to-day business operations, his two daughters do have ownership in the company.

Eric says, “The most rewarding element to our family business is the pride we have in being able to tell our story and how we have evolved and grown over the years.

There is plenty to be proud of, particularly last year when Prefix pivoted to make and distribute critical protective gear to hospitals, governmental units and other organizations.  They said it was important for their work family to feel they were doing something every day to make a difference and do something positive to help others.

Technology is what allowed them to pivot to make PPE and Kim says, it is also one of their biggest challenges facing the business today. “If you think things are changing quickly today, know that change is happening slower than it ever will in the future. It’s exponential!”  That is something to really think about. Eric echoes those thoughts and says, “As the company grows, challenges grow, because as you get bigger, every component of running the business gets bigger, as well.  You need to have great processes and accountability systems in place to sustain, grow, and prosper.”

But, as things change, one thing does not and that is the company’s commitment to keep their culture one of trust. This is something that Kim and Eric have gained with their employees, customers and suppliers over the years. They have earned respect and trust, which is pivotal to   successful succession planning from one generation to the next.

What is the best piece of advice for a family business? Overwhelmingly, the response was “communication!” When you speak to Kim and Eric, they recognize that the need to communicate transparently, regularly and candidly is paramount.

The beautiful thing about this family business is their two families, the home one and the work one, and the trust between father and son at both.