Ready for the grim reality about how well you communicate? Then grab your smartphone, turn on the video recorder and start taping yourself having a conversation.

That’s the advice Stacey Hanke has for anyone who wanted to boost their career, improve their influence over their industry and become a more effective communicator in general, both personally and professionally.

Hanke, an author, keynote speaker and communications coach, has worked with executives and teams from FedEx, General Mills, Coca-Cola and U.S. Cellular.

Her latest book, “Influence Redefined,” outlines what she calls her “Influence Model,” a step-by-step method for improving communication and producing the ideal type of influence – the one that moves people to action long after an interaction is over.

Through her company, Stacey Hanke Inc., she seeks to equip leaders within organizations to communicate with confidence, presence and authenticity, day in and day out. With a team of mentors and consultants, Hanke’s goal is to helps individuals eliminate the static that plagues communicative delivery – to persuade, sell, influence and communicate face-to-face with a clear message. She has trained over 15,000 people to rid themselves of bad body language habits and choose words wisely.

“Here’s the brutal truth: the people you’re trying to influence—whether they are customers, team members, or investors—aren’t paying attention to you,” Hanke said. “Every day we are trying to influence always-connected, digitally-distracted, multitasking individuals. If you are not more engaging and compelling than the digital distraction, you and your message will lose every time.” 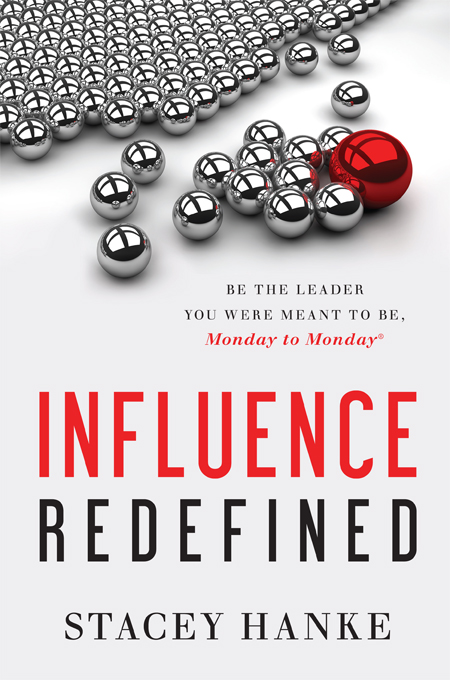 One the biggest things Hanke has focused on lately is what she says is a myth: that social media is a way to find new clients or gain recognition within your chosen industry. People may have thought tools like Twitter, Instagram and Facebook would help in these areas, Hanke said, but that is not the case.

Yes, these are important resources where your clients can learn more about you or your company. But if you want true engagement, you have to have real connections that occur in person, Hanke said. The only way to create trust and strong influence is through face-to-face communication.

For example, Hanke has a saying that goes something like this: “You have to be consistent Monday to Monday.” What does that mean? That every email, meeting, phone call and social-media post is consistent with your overall brand or messaging so the people you meet and interact with know who is showing up when you arrive – they already feel like they know you, Hanke said.

And clients likely do not get to know you through email, no matter how much you might think they do. Rather, email has become a place where work noise can overrule everything else. You need to filter through that noise, Hanke said, and that’s through talking in person or through the telephone when possible.

“We sprint through life. We just write, send, shoot,” Hanke said. “We need to take a step back. Based on the person you’re writing to, think about how you’re trying to influence them. Stop the email and pick up the phone.”

Email, although convenient, has its own issues, Hanke said.

“It’s like when people say in their emails, ‘Forgive my errors,’ at the bottom of a message. You don’t want that kind of impression. You don’t want them to think about errors,” Hanke said. “We’re hiding behind technology and we’re starting to lose the art of meeting face to face. You need to have in-person conversations because it’s a lot easier to influence people that way than hiding behind an email.

“That’s the core of this book – you need self-awareness of how you’re really coming across versus what you believe to be true,” Hanke said. “You may write an email thinking you’ve been clear, but the information you’ve included could be taken the wrong way. Pick up the phone instead. Leave a voicemail if needed. Then send along the details from your call in a follow-up email. I want my clients to hear my voice – your voice is the essence of you. You can really soften or create more impact with your voice before you send your email.”

If you do send that email, Hanke also recommends you think very hard about your subject line. Don’t start out there – save that part for last. You want to get to the core of your message and what you want the reader to take away in that area. Be creative, Hanke said. Write a subject line that stands out from the rest of the messages in that person’s inbox.

When you do write the body of the email, think about clarity and length. Write short sentences. Be clear. Have a call to action at the end of your message, she said. That could be a time to talk on the phone or in person, Hanke said. You want to have that face-to-face conversation to have the most influence on the person you’re communicating with in that email.

That’s where having the camera on you comes in. Watch a video of a time when you’re doing a phone call or talking to someone in person. Work on your presentation and how you sound to a potential client. If you get really good at this, you could create video messages and attach them to an email, Hanke said. It’s second best to meeting in person, but the email recipient sees and hears you in a more influential way via this video, she notes.

Hanke admits it feels basic to offer this advice on the basics of telephone calls, email and the importance of in-person meetings. But these standards are still the best in terms of communicating with others and having influence in your chosen field. The oldest ways are still the best ways, she said.

“I know I’ll always have job security because we forget the basics,” Hanke said. “It’s common sense, but it’s not common practice. You need to engage people – only then can you influence them with your message.”