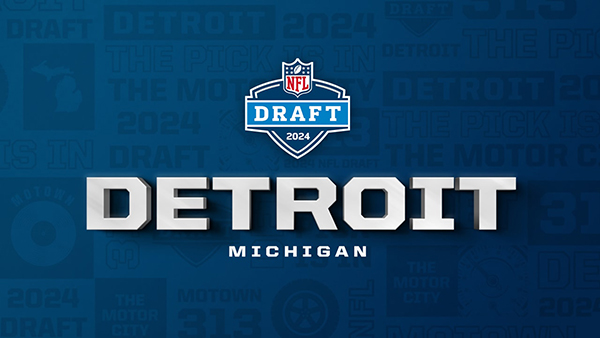 It’s a glorious, football- and Bud Light-fueled day (in fact, sponsored by Bud Light) that draws thousands from around the country hoping to catch a glimpse of the next rookie to make it to the pro league. And for city officials and local businesses, it’s a chance to rake in the tourism cash from hotel rooms, restaurant tabs, drinks (again, brought to you by Bud Light), T-shirts and other sports memorabilia.

“It’s kind of like Mardis Gras and a championship parade all wrapped into one,” said Visit Detroit CEO Claude Molinari. Molinari previously told the Detroit Free Press that Detroit landing the NFL draft was “the best day in the history of my life.”

Molinari and Detroit Chief Operating Officer Hakim Berry told Corp! Magazine that it’s too early to tell how many people might come or what the economic impact of the event will be for Detroit.

“We saw from previous drafts, especially with the last one held in-person in Nashville, the attendance level was huge, people had come from all over the country,” Molinari said.

Detroit beat cities like Green Bay and Washington D.C. to host the draft, according to the NFL. It’ll take place around Campus Martius Park, with the draft happening in Hart Plaza.

“Being able to host another sports event — it’s fantastic,” Berry said, who added that the city is still taking a look at the potential economic impact, but expects it to be on par with the Detroit Grand Prix.

Berry said he couldn’t yet outline all the city’s preparations, but said it will be a chance to “really celebrate and really highlight that momentous occasion of an athlete being able to go pro … you’ll have that opportunity to really rejoice in that experience.”

Molnari and Berry — who both helped put together the proposal to land the 2024 draft event — are quick to point out that previous drafts in other cities have generated millions in cash. Visitors spent a record-breaking $132.8 million during the 2019 draft in Nashville, The Tennessean reported. The Philadelphia Business Journal reported that an NFL Draft impact report pegged the 2017 draft event at $94.9 million in revenue.

More than 200,000 visitors flooded Chicago in 2015, generating about $456,000 in city hotel tax revenue, with a total economic benefit of roughly $81.6 million, the Chicago Tribune reported. Chicago spent about $4 million preparing the city for the event, more than half on marketing and $1.6 million on infrastructure, according to the Tribune.

That doesn’t factor in the cost for paying for police, paramedics and other city services necessary to host an event that draws hundreds of thousands of people. Detroit will share similar costs associated with securing a venue, setting up barricades, police and emergency services personnel — plus any “beautification” Detroit might need to undergo, Berry said.

The city official didn’t go into detail about what those projects might entail. But other cities, not just Chicago, have spent millions on draft events in the past. Philadelphia doled out $500,000, a local publication called Billy Penn reported, while Texas spent $2.1 million to cover some of the costs from hosting a huge sporting event.

According to the Free Press, Detroit landing the event comes after pursuing it for more than five years. The idea was first put forward by Detroit Lions president Rod Wood in 2017. Wood told the newspaper he expects “hundreds of thousands of people” to come to Detroit and called it “the next biggest event” to the Super Bowl.

But if the closest comparison is the Super Bowl (a much bigger event, of course), then it might be worth considering the economic projections vs the reality for previous host cities of the big bowl.

Economists say that Super Bowls tend to generate far less than the NFL and local officials claim. A 2004 study published in the European Sport Management Quarterly argued that host cities between 1970 and 2001 reaped about 25 percent of the $300-$400 million such events are usually said to generate. In fact, University of South Florida economics professor Philip Porter wrote in a 1999 paper that a Super Bowl’s positive economic impact on a host city is often close to zero.

Other economists have made similar points more than a decade later.

Local leaders and national football league officials said in 2006 then the Super Bowl would generate more than $300 million in revenue for the city. An economic impact projection from the Michigan-based Anderson Economic Group at the time pegged it closer to a much more modest $49 million. Detroit taxpayers chipped in $125 million to pay for building costs at Ford Field, ESPN reported, where the event was held.

Anderson Economic Group did not immediately respond to an inquiry into whether there was a definitive retrospective study looking into the actual economic impact of the 40th Super Bowl.

Still, Visit Detroit’s Molinari said the event represents “positive momentum” for the city and a “great legitimizer” showing Detroit as a prime city for meetings, conventions and big sporting events.

“We won’t be shy” about sharing that, Molinari said. “We’re gonna be a force to be reckoned with in this area, moving forward.”