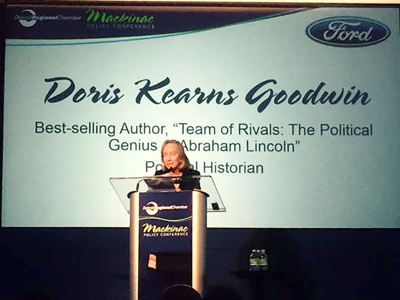 As a presidential biographer and historian, Doris Kearns Goodwin certainly feels sympathy for the struggles that past leaders have endured.

But she also has strong feelings for the leaders of today, whether they are presidents, chief executive officers or managers of any kind. Their need to balance the media, the job’s demands and their relationships with fellow leaders is a struggle where few truly excel, Goodwin noted to a group of reporters at the 2015 Mackinac Policy Conference. Some background: Goodwin was awarded the Pulitzer Prize in history for “No Ordinary Time: Franklin and Eleanor Roosevelt: The Home Front in World War II” and is the author of the bestsellers “Wait Till Next Year: A Memoir,”  “Lyndon Johnson and the American Dream” and “The Fitzgeralds and The Kennedys,” which was adapted into an award-winning five-part TV miniseries.

So how can a leader adopt some of the qualities that Kennedy, Lincoln, Roosevelt and Johnson had in their daily lives? Here are few of Goodwin’s observations.

1. Your communication has to be simple. Provide your listener with the basic information. Don’t use flowery language or huge words. Franklin Delano Roosevelt prided himself on limiting himself on how pompous his word choices were, Goodwin said. Do the same.

2. Tell a story. Lincoln used the phrase “A house divided cannot stand” like a sword – it immediately created an image in the minds of people who read it or heard it. Teddy Roosevelt also used a house in his descriptions of the relationship between the United States and other countries. That image gave the American public something to hold onto as they tried to embrace the messages their presidents gave them.

3. Reach people emotionally. FDR smiled and make gestures when he did his fireside chats – that mood translated over the radio and created loyalty among the listeners, the American people. FDR also kept people in the audience, friends of his, who could give him verbal feedback to his words.

4. Get out of the office. Teddy Roosevelt took these six-week tours out of the White House to meet and greet the public. These sorts of meetings are essential to leaders, who need to get out of their offices and hear what “regular” people have to say. To surround yourself with “yes people” does your company or organization a disservice, Goodwin said.

5. Give people – and yourself – time to focus. In Lincoln’s day, all of his speeches were printed in the newspaper, Goodwin said. That gave the American public time to read, re-read and re-read again his words. They had time to digest his ideas, Goodwin said. In this busy digital era, people are scanners. Leadership can be lost in the quick turn of news. Find a way to put your words, ideas and thoughts before your public in a way that lets them think deeply upon what you’ve said, question it and respond to it.