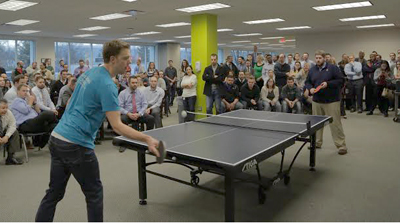 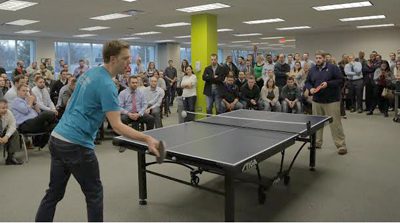 If you go to work at United Shore, you better have a competitive spirit. Because this company truly lives by the mantra “Work hard, play hard.”

United Shore recently completed its inaugural Paddle Battle Tournament (yes, you read that right). Todd Wood, a senior underwriter, won the championship in front of a lunchtime crowd of 100-plus team members. The prize for winning was an authentic trophy and two suite tickets to an upcoming Detroit Pistons game.

In its first run, the single-elimination tournament ran for three weeks and consisted of a 48-person bracket, in which United Shore team members were able to sign up to participate. The tournament received tremendous buy-in from all levels of the organization, as even President and CEO Mat Ishbia got into the action – advancing to the Sweet 16 before losing. 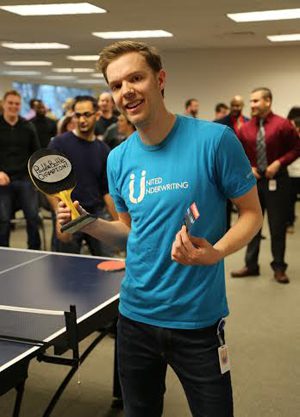 The Paddle Battle Tournament was inspired and coordinated by team member Dave Higgins, who is a part of United Shore’s Business Innovation Group (BIG) program, which allows people to gain experience throughout the company by rotating through 12-13 teams.

This is just one way that United Shore in Troy, Mich.,  works diligently to offer its employees unique work-life benefits. There’s the valet car service, which comes in handy on cold, wintry days. There’s its human-resources department, which is known as the “Team Member Services” department. There’s perks like on-site dry cleaning, a cafeteria and Starbucks on the premises, and a gym for staff to use before and after work or at lunch.