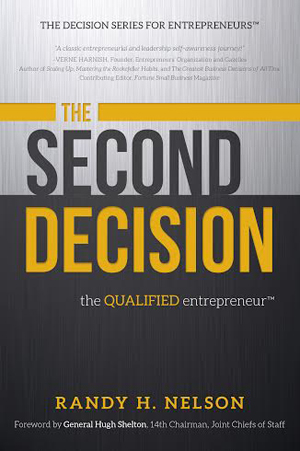 Hey, millennials: Why aren’t you interested in starting your own business?

Statistics show that the millennial generation appears less interested than previous generations in starting their own businesses, preferring instead to find work with established companies. In 1989, 11.6 percent of households headed by someone younger than 30 held a stake in or owned a private enterprise; today that percentage is 3.6 percent, according to a recent Wall Street Journal report.

Randy H. Nelson finds that troubling, but perhaps understandable. “The statistics show the odds of success for a new business are pretty dismal,” says Nelson, author of the Amazon best-selling book “The Second Decision: The Qualified Entrepreneur.”

“Half of new U.S. small businesses fail in their first five years, and 70 percent have gone under by year 10. That’s not exactly a new trend, but what is a new is that each year in the United States more businesses now are shutting down than are being started.”

He says when he looks back over his 25-year entrepreneurial career that he could clearly identify four components of the qualified entrepreneur, and recently he added the fifth component, self-awareness, which is an important piece of each of the other four.

So what should the millennial generation consider if they do want to go into business for themselves?

• Entrepreneurship. People who become entrepreneurs are usually brimming with self-confidence, Nelson says. That helps them when it comes to making that “first decision” of starting a new company, all but ignoring those sobering odds for failure that would dissuade many others. The entrepreneur optimistically thinks: “I know I can do this.”

• Career-Long learning. Entrepreneurs think growth all the time for their businesses. They preach their vision to employees and hire the best talent to help them reach their goals. But are entrepreneurs growing their skill sets as fast as their companies grow? If not, they risk becoming the wrong person in the wrong seat, with the very employees they hired to take them to the promised land asking: ”What value do you bring to the company?”

• Leadership. The importance of good leadership is paramount to business success, but not all leaders are created equal. Nelson breaks down leaders into four types. The “urgent/reactive” leader thrives on an almost crazed atmosphere where he or she can ride to the rescue, put out the fire and move on to the next problem. There isn’t much time for introspection and no real vision. An “ever optimistic” leader starts from the belief there is nothing he or she can’t do. “Yes, we can do that!” is the typical answer from this type of leader…leaving it up to their staff to figure out how, even if accepting the new business takes them away from their core focus. The “reflexively pessimistic” leader plays to survive, not to win. This leader has been toughened by hard times, and always worries about the economy’s effect on the business, Nelson says. In some industries easily battered by a downturn, this style can be effective. But if maintained too long, the pessimism becomes a self-fulfilling prophecy. The final leadership style, the “steady/proactive” leader, is the one every CEO should strive to become, Nelson says. This type of leader values productivity and profitable growth above all things, knows how to achieve both and can course-correct no matter the difficulty. “They understand both offense and defense, and can shift between them as cycles dictate,” Nelson says.

• Life cycle. A business has different needs at different stages of the corporate life cycle. The qualified entrepreneur must recognize that. The startup stage is where many entrepreneurs thrive. Creating something from scratch is what they are about. Needs and challenges change, though, as companies enter growth or expansion stages. The entrepreneur’s needs change, too, because entrepreneurs have their own life cycle, Nelson says. First, there’s getting the business started, and then there’s the second-decision stage when the entrepreneur needs to choose what role he or she plays in the business, and whether others might be better equipped. There’s also a third decision when entrepreneurs realize work infringes too much on family and personal time, Nelson says. “To avoid regrets later, you have to consider whether you need to make a stronger commitment to a more balanced life.” Finally, there’s the end stage when the entrepreneur is finished with the current business and must decide what is next. Having experienced the “exit” twice in his career, Nelson has come to realize that after the sale only a few lives really change. Everybody else goes on with their normal day while the entrepreneur, much like a retired athlete, must figure out how to function without leading their entrepreneurial venture every day.

• Self-Awareness. Entrepreneurs need to know their strengths and weaknesses, and how they affect the business, Nelson says. Unfortunately, that’s a trait they often fail to develop. His suggestion: Surround yourself with people who know more than you (entrepreneurs, leaders, and coaches/advisors who have been through all the life-cycle stages the entrepreneur is navigating through) and learn from them. Once you have a clear understanding of what you do and don’t know, you can decide your next steps.