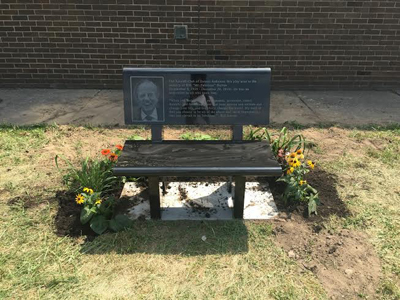 Every group’s success comes from its leaders – the person or people who devote themselves to the group’s mission as well as giving back to the community.

For the Adcraft Club of Detroit, late local radio legend Bill Burton was that kind of guy. To honor his memory, the club’s Project Playground initiative got busy recently in a Detroit park and built a playground that Burton – and generations of children – would love.

The park now belongs to the  children of Mason Elementary-Middle School on Detroit’s west side at 19955 Fenelon St. and is open to the public. The park is part of the club’s Project Playground initiative, an annual event where Adcraft volunteers renovate a Detroit playground. Burton was president and COO of Detroit’s Radio Advertising Group where his primary focus was to sell radio at the decision-making level. He also put on presentations throughout the country on “Why Radio?” and is estimated to have contributed $300 million in radio sales in his more than 30-year career. He was an active member of the Adcraft Club and was added to its hall of fame in 2005 for his professional and volunteer contributions to Detroit’s marketing communications industry.

“It’s really important to give back to the city we come from,” said Mike Riley, chair of the Adcraft PM committee which organizes the event. “Bill was a huge supporter of Adcraft events and a major contributor to the club’s growth, so this year we decided to build a park from scratch and dedicate it to him.”

Adcraft is working in collaboration with sponsors including CBS, Say Media and AutoTrader as well as additional volunteers from Carat to transform the currently empty lot to include play structures and soccer fields.

The school had previously been a middle school, but play structures were never added when it merged to include elementary school-aged children as well. Principal Omega Mostyn said students don’t currently have a real recess. “Group interaction, along with social and physical development are essential in the academic and social-emotional growth of children. What better place for this to take place than on a playground!” she said. “I can speak for the entire Mason Staff, we feel truly blessed to be the recipients of this playground that will provide physical and social-emotional engagement for our students and will also contribute to an improved school culture and climate.”

Mason Elementary is one of eight schools to undergo a restructuring process this summer as part of Detroit Public Schools’ plans to reinvent and transform the district’s academic and business operations, and the playground will be a part of that process.

Established in 1905, the Adcraft Club of Detroit brings together members of the media, advertiser and agency community to exchange big ideas, support and educate one another as means of evolving their own professional development and the creative industry they are a part of. With 1,900 plus members, the Adcraft Club of Detroit houses some of the most well-respected and established consumer brands in the world. The Adcraft PM committee focuses on civic and social outreach for the club. The event is an opportunity to give back to the city and honor the legacy of a long-time Adcraft member.