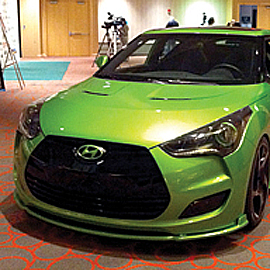 By Sue Voyles and Rick Blanchard

It was only fitting that the 16th annual Urban Wheel Awards, the official multicultural event held in conjunction with the North American International Auto Show, kicked off its Jan. 8, 2012, awards event at MotorCity Casino Hotel with a special reception and presentation of its Pioneer Award to Bill Perkins, the first African-American chair of the NAIAS.

Perkins graduated from the GM Dealer Development Academy in 1987. Since then, he has owned and operated five dealerships in southeastern Michigan. Today, his company, The Bill Perkins Automotive Group, employs nearly 150 people and manages the operations of Merollis Chevrolet in Eastpointe and Taylor Chevrolet in Taylor. Perkins has also served as president of the Greater Detroit Chevrolet Dealers Association, president of the General Motors Minority Dealers Association, as a member of the board of the National Association of Minority Auto Dealers, and chairman of the Auto Dealers Political Action Committee for the state of Michigan.

In accepting the award, Perkins acknowledged the support from family, friends and employees, and the importance of diversity.

“You just don’t get awards like this without the help of good people and good employees. The more diverse we become, the better we all are. It’s the people who really make the difference.”

More than 30 of his employees attended the event and surprised Perkins with a video thanking him and stressing the business standards that have made the Perkins Automotive Group a success.

The gala event wrapped up with an awards presentation in Motor City’s glitzy SoundBoard hosted by award-winning actress Phylicia Rashad, from “The Cosby Show,” and ABC news anchor John Quinones.

Attendees at the event were energized by performances from Beth Griffith, Lisa Deveaux and Larry Lee & Back in The Day Band.

The biggest crowd applause came when the Range Rover Evoque drove onto center stage, after winning the award as 2012 Urban Truck of The Year. Andy Goss, president of Jaguar and Land Rover North America, accepted the award for Land Rover and noted that it would likely be “a surprise to some that the North American Truck of the Year is a four-cylinder SUV that achieves 28 miles per gallon.”

The Annual Urban Wheel Awards honor companies, executives, suppliers and others for recognizing the growing multicultural consumer and embracing diversity in operations and mission. The 16th Annual Urban Wheel Awards presented a number of awards in several categories. According to R.L. Polk & Co., consumers in the multicultural market purchase one-quarter of new vehicles annually.

Tshua founded Saturn Electronics & Engineering Inc. in 1985. He started with an idea and a business plan, and tenaciously pursued financial resources until he was able to launch with just six employees. Since then, Tsuha has significantly grown the company to a highly recognized global supplier to OEM manufacturers and their suppliers.-¨-¨

Segura is the founder of VisionIT. Fifteen years ago, with a strong technology background, Segura combined his zeal for IT with a vision to create VisionIT, an IT managed services, IT staffing, and vendor management firm. Since that time, Segura has successfully led the company from a startup to a global enterprise working with some of the largest corporations in the U.S. and Latin America.

Moorehead opened the 39,000-square-foot, state-of-the-art BMW of Sterling, Va., facility in 2001 with separate showrooms for the BMW and the MINI Cooper brands. The facility sits on a seven-acre site in prosperous Loudoun County.

Nguyen, a native of Saigon, South Vietnam, joined Lexmark International in 1991 and assumed responsibility for sales and operations throughout 11 states. In September 1996, Nguyen was accepted into the General Motors Minority Development Program and also enrolled in the National Automobile Dealers Association Academy. He graduated from the academy in August 1997 and purchased Showalter Buick GMC in Goshen, Ind. in October 1999.

Beginning his career on the sales floor in 1973, Zamora brings a realistic grassroots approach to the business, understanding and balancing the needs of all employees. Starting at the ground floor, he has empathy for the many challenges employees face today. The Zamora Automotive Group has grown from a small Honda dealership in 1981 to one of the largest and fastest-growing, privately owned automotive dealer groups in Northern California.-¨

The Urban Wheel Awards judging panel spent months selecting the most stylish, practical and attainable vehicles by driving dozens of cards and trucks in a variety of North American settings before settling on three winners.

According to Lyndon Conrad Bell, Decisive Auto’s editor in chief: “Evoque’s compelling blend of a long and deeply respected heritage; sinfully indulgent luxury; outstanding capability both on the road and off; all married to pure, unadulterated sex appeal made this award a slam-dunk for Land Rover.”

“Veloster’s combination of a hip and edgy image, along with exceptional value to price and outstanding fuel economy perfectly suit it for urban drivers. That Hyundai chose to make its halo car an entry-level model excites us even more. With Veloster, Hyundai proves definitively that high style and reasonable pricing absolutely can go together,” said Decisive Auto’s Bell.

“This is the Prius everyone has been waiting for. Endowing the world’s favorite hybrid with the ability to run purely on electric power for significant distances and recharge itself from an AC outlet remade an exceptional urban green car into the ideal urban green car,” said Bell.-¨-¨Urban Green Vehicle Runners-Up: Infiniti M35h and Mitsubishi i-MiEV.-¨

In addition to the Pioneer Award presented to Perkins, the Urban Wheel Awards also recognized two other individuals.

Brown, long considered the “dean” of African-American automotive journalists, has been covering the automobile industry for The Washington Post since 1982. Interestingly, Brown started covering cars at The Post primarily as a way to ensure his longevity at the newspaper. Advised early on to find something to do that wasn’t already being done, and further, to live it and love it, Brown settled on cars.

Auto Companies of the Year were honored for demonstrating a commitment to diversity and inclusiveness in the awards of Workforce Development, Community Leadership, Minority Supplier Development and Diversity Inclusion Leadership.

“Our judges looked at four companies for their diversity leadership in four keys areas, and picked the ones who set the benchmark for the rest of the industry,” said Randi Payton, founder of the Urban Wheel Awards.-¨-¨

General Motors has donated hundreds of millions of dollars to deserving American charities, educational organizations and to disaster relief efforts worldwide. GM also engages in many efforts to address the health and vitality of global communities through in-kind donations and volunteer initiatives.

Toyota Motor Sales, U.S.A., Inc.s’ external diversity advisory board consists of some of the country’s most recognized leaders in the fields of diversity, public policy, economic development and community relations. It formed the advisory board in 2002, to bring outside experts’ perspectives to help shape and maintain the company’s commitment to diversity.

The company has a number of mechanisms in place to support work-life balance. Its CEO Sergio Marchionne is executive sponsor of Chrysler’s Global Diversity Council and has committed the organization’s leadership team to the values and principles of diversity. The company’s mentoring programs engage some 70 percent of its managers and 40 percent of its employees with cross-cultural considerations.

-¨2012 Corporate Social Responsibility Project of the Year:
Hyundai Motor America-¨In 2011, Hyundai funded 71 pediatric cancer research projects and programs at Children’s Oncology Group institutions across the country through its Hyundai Hope on Wheels initiative. Since 1998, the Hope on Wheels program, and the company’s 800-plus dealers have committed more than $43 million to the cause.