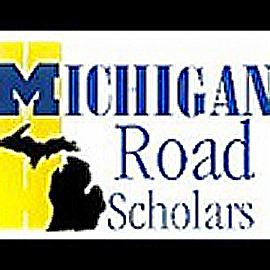 For colleges and universities across the country, size is usually a good thing.

More students means more graduates, bigger research programs and even more endowments from alumna who go on to graduate and, presumably, make the kind of career choices that allow them to contribute to the ongoing success of their alma mater.

But there’s a potential downside to all that growth and size, says Dana Sitzler, associate director of state outreach at the University of Michigan, one of those giant educational institutions that just keeps rolling and rolling, certainly due to its sheer critical mass.

“There were a lot of misperceptions in the state,” says Sitzler, referring to results of a survey that U-M used to gauge public perception in its home region and which lead to what is now an annual program to engage members of the university community with those who call the Great Lakes State their home.

“We’re trying to increase mutual knowledge and understanding between the university and the people and communities of the state,” adds Sitzler, who says encouraging university service to the public is a principle that’s embedded in the initiative. “We find by being there and being available for discussion opens up the dialogue and leads to ways faculty can help address state issues through research, scholarship and creative activity.”

Taking it on the road
Some 15 years later, the Michigan Road Scholars Tour continues to work to dispel the idea that the Ann Arbor-based university is too far removed from those who, through the state’s publicly funded system, have at least an arm’s length ownership.

Set up as a week-long bus tour throughout U-M’s home state, Michigan Road Scholars takes some 30 professors to places they might not otherwise visit, even after several years of classroom teaching.

Sitzler and her staff spend much of the year planning the annual tour, identifying areas that she believes will ultimately contribute to a better understanding of U-M’s mission and contribution to the towns and cities they’ll visit but add to the diversity and richness of what goes on at campuses in Ann Arbor as well as Dearborn and Flint.

“We do a lot of scouting ahead of time,” says Sitzler.

But the real on-the-ground excitement comes when the bus pulls up and participants begin interacting with those who have opened up their communities as part of this whirlwind tour that typically ends up being about two hours at each stop.

On day one of the most recent tour (which wrapped up in May), a breakfast visit connected U-M representatives with the Accident Fund of Michigan. CEO Liz Haar talked about how the company was facing challenges to bring new talent into the industry, accompanied by Michigan’s Insurance Commissioner, Kevin Clinton, and Lansing Mayor Virg Bernero.

That same day the U-M tour stopped at Emergent BioSolutions, where anthrax vaccine is produced for the U.S. government.

Dialogue is something Sitzler and her staff is constantly looking for ways to bring together the expertise of those on the bus and those in the communities they are visiting.

“At Accident Fund, it was recruiting talent and bringing those kinds of needs to our faculty (that) helps open their eyes to how they can impact the world from their classroom. If we hear there are needs in a community, we try to find some expertise that would be helpful to them,” adds Sitzler.

One of those participating in this year’s tour was Desmond Patton, assistant professor of social work, who arrived with few expectations but came away with at least one surprise.

“I definitely didn’t know that Michigan had such a strong tech community,” said Patton, whose work includes qualitative research into the relationship of social networks and neighborhood conditions with urban African American males.

A visit to the Detroit Hispanic Development Corporation, another tour stop, was of particular interest to Patton, who plans to do a follow-up evaluation with the organization’s leadership.

“There were numerous opportunities to engage people in conversation that I typically wouldn’t connect with,” says Patton.

For Brooks Hull, getting on the bus this year was a matter of being in the right place at the right time, perhaps because his wife works in the office where the tour is organized.

“They had an opening at the last minute and I signed up,” says the U-M professor of economics at the Dearborn campus.

From there it was a non-stop “listen-fest.”

“Even if we asked questions, it was not so much to help them out but to give us a different perspective of the state,” says Hull, who says he was particularly impressed after visiting Goodwill Industries’ office in Grand Rapids.

“I was surprised really by how much value they are able to get out of a single donation,” says Hull, a professor of economics.

This year’s focus was on ways Michigan is adapting and evolving into the new knowledge-based economy, reflected in the itinerary that included Traverse City-based OneUpWeb, a swing by the Big Buck Brewery in Bay City, and a day in the Upper Peninsula, winding up back in the lower part of the state with a visit to Detroit, including the College for Creative Studies, Eastern Market and the Detroit Hispanic Development Corporation.

While the U-M program may be unique in some respects, other universities are earning a reputation for extending their academic reach into the communities they serve.

The Cornell experience
One example is Cornell University, based in Ithaca, N.Y., where the school has joined a relatively small list of schools named an institution of community engagement by the Carnegie Foundation for the Advancement of Teaching.

Ronald Seeber, senior vice provost at Cornell was one of those who prepared the application to Carnegie.

“In these times, community engagement is more important than ever,” Seeber said. “In the 21st century, it is essential for a university or college to demonstrate its value to society through its interactions with the communities its students and faculty members are trying to learn about and serve.”

One of the programs that lead to Cornell’s distinction is a Burn Education Initiative by the Weill Cornell Medical College Department of Surgery that resulted in the fewest civilian fire deaths in New York City in 90 years.

Cornell has also helped educate men in prisons through its Prison Education Program, which provides free education for 120 incarcerated men each year. Ten Cornell faculty members, including David Skorton, the school’s president, teach courses and other faculty members give guest lectures, supported by 80 undergraduates who serve as teaching assistants.

And the school is taking a “down on the farm” view with a program that promotes the sustainability of small farms that contribute to food security and healthy rural communities.

Reaching out to communities, whether in Michigan or New York, reflects a philosophy that people like U-M’s Dana Sitzler say can grow with time.

“When we set up the stops, we start with the question: ‘what could a higher education institution do for you?’ It’s truly amazing what comes next.”

For more on the Michigan Road Scholars, visit www.mrs.umich.edu.