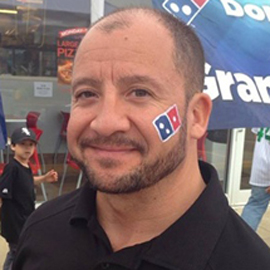 When you ask a pizza guy what his favorite food is you have certain expectations. “Thai” is not one of them. “Cheese,” maybe. “Pepperoni,” might be an alternative. Just not “Thai.”

Yet that is what Reece Arroyave answers.

Arroyave started as a pizza guy when he was 12, distributing those familiar door-hangers and other promotional items for the Domino’s store where his 17-year-old sister worked in Libertyville, Ill.

“Let me tell you,” Arroyave sort of backtracks. “Pizza is my life. I eat pizza probably three days a week and I have for probably 20-plus years. It’s what I live and breathe.”

“I’ve always been a little busybody,” he explains. “Being 12 and it being summer, I was looking for something to do and she just asked me if I wanted to help out promoting the local store. My payment was pizza and Coca Cola.”

By the time he turned 14 Arroyave had moved inside the Domino’s store where he answered phones, made pizza and learned shift-management as a part of “the Domino’s plan.” During high school he progressed from making pizza to supervisor to management. While that might be considered a fast track for some, Arroyave was following precedent.

“When my sister was working at the Domino’s she was 17 - but the manager was only 19. They started dating and he’s now my brother-in-law because they’ve been married for 24 years. He bought his first Domino’s pizza store when he was 22.”

Arroyave is a poster child for a franchisee. “I like to control my own destiny and really take advantage of opportunities. When I watched him become very successful at a young age I learned, listened and watched what he did to get ahead at Domino’s pizza.”

The brother-in-law ended up selling Arroyave some of his Domino’s stores and has moved on to “new challenges” while Arroyave’s personal challenge is to own 40 Domino’s stores before he’s 40. He has two years to go.

A switch to corporate
In 1999, Arroyave bought his first Domino’s store but a few years later sold it and went corporate, becoming operations director for 17 Chicago stores, then an area leader. “It was one of the best things I could have done,” he explains about his venture into the broader world of Domino’s. “Learning the corporate side of operations, store development - I learned a different side of what Domino’s Pizza was all about. I learned how to be a better businessman; how to build stores with franchisees, how to do business planning to a different degree than I had been doing as an individual franchisee. When you teach something you learn something at the same time. I established a lot of relationships within the corporation that have helped me through the years become a better and stronger operator. A lot of people I respect on the business side continue to develop and support my progress today. It was a great opportunity.”

Back to retail
By 2005 he was back in the retail side, buying four stores still in the Chicago area. “They’re the foundation that I’m building from.”

What prompted the move back to the real world of toppings and promotional deals? “I like to control my own destiny,” he stresses again. “I don’t like to have any ceiling to my potential. Working for myself I create opportunities that I can take advantage of. With the commitments I’ve made with corporate in building new stores I have endless opportunities and that’s what I really choose to go after.”

Pizza Theater
Arroyave recently opened a store in Glenview, Ill. It’s part of a new concept for Domino’s called Pizza Theater. While they’re still not getting into a restaurant mode, Domino’s is reacting to an increase in carry-out orders compared with the traditional “pizza delivery expert” method.

Late in 2009, Domino’s tossed out its old recipe book and revamped the way it made pizza. New ingredients, new items, a new customer commitment resulted in the chain being named the next year as “Chain of the Year” by Pizza Today magazine (yes, there is a magazine called that.)

“Our stores are now becoming transparent,” says Arroyave. “We are front and center with the customer, engaging them with a more positive light. The Pizza Theater lets carryout customers sit on bar stools and watch the action going on and how we’re making the pizzas. There’s a little stair where a young child can step up and watch the ‘dough-show’ where our managers bring a little more fun and excitement to the overall experience.”

And, it is hoped, more 12-year-olds will want to climb up those stairs and then grow up to be managers or owners.

“The opportunity is endless in Domino’s Pizza,” Arroyave says enthusiastically. “We provide opportunities at the stores, corporate gives us the opportunity to train our people to hopefully have pizza sauce running through their veins and live the American Dream.”

He reminds us of a franchisee-recruitment campaign that Domino’s is running: “90 percent of our franchisees started at the bottom as pizza delivery experts or pizza makers and it holds true. We’re one of the very few concepts in the country that can make that statement.”

A focus on the Hispanic market
Arroyave is of Central and South American heritage and has been active in the management of Domino’s national Hispanic Marketing Advisory Council since its inception nearly eight years ago. “It’s a great opportunity to bring my local knowledge and experience to the corporate marketing level. We help as they’re deciding on things like targeting product lines for the Hispanic community or a price-point that works for the Hispanic market. The Hispanic community is very loyal to Domino’s Pizza and to companies that take great pride in customer service and providing great product at a fair value.”

With three stores in heavily Hispanic communities in Chicago, Arroyave says he “takes great pride in the Hispanic consumer.” So much so that “part of our growth plan is to acquire existing stores and build others in underdeveloped territories that have strong Hispanic neighborhoods.”

While he looks at all pizza consumers as opportunities, Arroyave says, “We try to capitalize on their loyalty and what we can offer the Hispanic consumer and show them that emotional attachment with Domino’s.

What might have been
What might have happened if 12-year-old Reece Arroyave had not had a sister who worked at Domino’s? His answer might surprise you.

“I went to college and I graduated in three-and-a-half years with honors with a degree in criminal justice. I had the opportunity to do law enforcement right out of college but I realized that while I was very interested in the system, Domino’s was my life. But criminal justice is near and dear to my heart and that’s probably what I would be doing - if I wasn’t with Domino’s.”