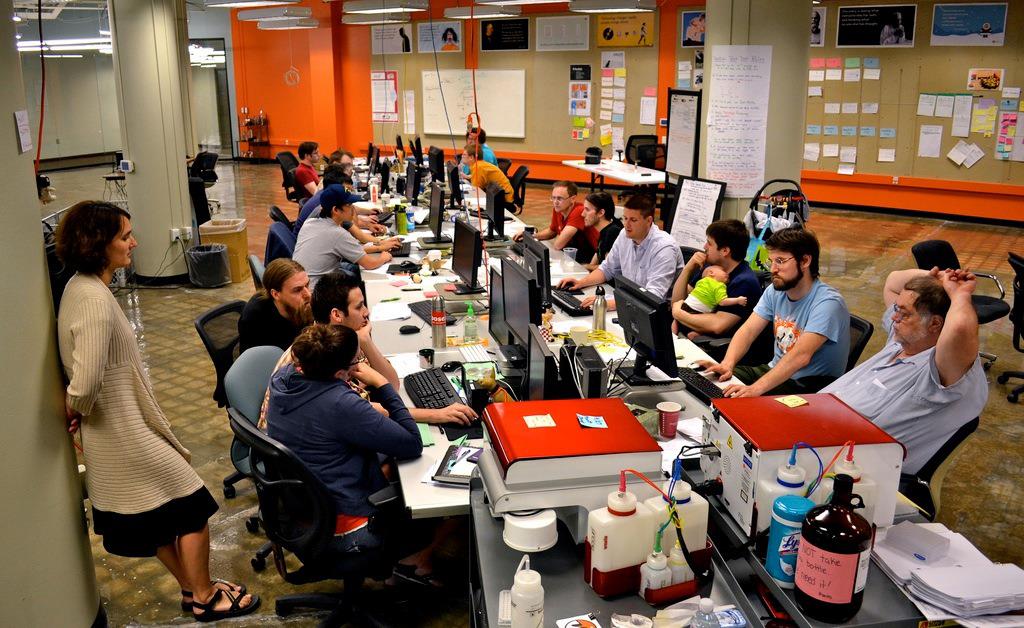 It’s been more than a few years since John Lennon famously penned “Give Peace a Chance,” a song that would be become a refrain for the Vietnam-era peace movement.

You ought to do the same with Richard Sheridan’s “Joy” as in “Joy, Inc., How We Built a Workplace People Love,” a combination step-by-step guide and evidence-based case for dramatically changing the way we work.

“Joy” is both about building quality software and creating and sustaining organizations to which we would all love to be part and Sheridan, CEO of Menlo Innovations, an Ann Arbor-based firm he co-founded in 2001, tells a compelling story that deserves our attention.

For starters, he has the credibility for not only having done things “badly” (there’s loads of detail in “Joy” to come to your own conclusion) but having helped create a system that continues to thrive.

Another reason for embracing “Joy” is that this isn’t just about software development, although clearly that’s where Menlo’s expertise lies, having produced many hundreds of successful projects that have made possible a great many products that quite likely wouldn’t otherwise have made it to market.

In fact, it’s about several things that commonly form part of a corporate environment, including hiring, managing, designing and building “stuff,” dealing with clients (who tend to not know what they really want, if not need).

Sheridan’s journey to Menlo includes being in almost exactly the right place as a teenager where he was exposed to the seemingly magical creation of what we now call software.

Eventually graduating from University of Michigan with two degrees (computer science and engineering) and grabbing hold of a career ladder that seemingly went in one upward direction, Sheridan eventually found himself at Interface Systems, which made software that would convert so-called “legacy” files (such as the volumes of paper documents law firms had kicking around) into readily accessible electronic versions). By the late 90s Interface had become one of the most valuable public companies (by stock growth) in Michigan.

It was at Interface Systems that Sheridan began tinkering with a new way of managing the software development process, pairing up programmers to work together in wide-open spaces, and infusing the beginnings of a deeply disciplined yet highly creative workflow that today still sets Menlo Innovations apart from the archetypal cubicle world of many corporations.

You may be tempted to dive right in to the deep waters that make up “Joy.” Resist.

This is a read where experiencing the backstory, including the foreword that reveals how Sheridan very nearly wrote the wrong book, is well worth the time.

But “Joy, Inc.” does sate the reader’s appetite, by clearly, explicitly and largely without reservation revealing how Menlo structures an operation that is so fundamentally different from thousands of businesses where one thing is said,”our people are our most important asset” being one example and quite the opposite ends up taking place.

You’ll discover how the name “Menlo” came to be used (in part a homage to Thomas Edison’s Menlo Park, N.J., laboratory), why “software factory” is anything but a scary place to be, why using two programmers working together solves inherent and potentially fatal development issues, and how a tongue-in-cheek High-Speed Voice Technology (e.g. talking) is far more efficient than you might at first think.

Throughout “Joy” you’ll discover how Sheridan and his partners (and what he calls “Menlonians”) have disrupted the software industry, although one suspects that the radical nature of what has been done isn’t something that will (or even could) take off in a widespread way.

That’s not because it doesn’t work it clearly does. But there’s that “not here, it won’t” dismissal that’s bound to creep in.

But there’s also the tendency (which Sheridan writes about throughout “Joy”) to take shortcuts that would do more harm (much more harm) than good, even to the point of killing a project.

Take for example the process that Menlo requires every piece of work it handles to undergo. While seemingly rigid and even inflexible, the strength of a system that prevents “project creep” clearly trumps the old way of simply piling stuff on to a pile and working longer to get it done.

“Joy” is also full of entertaining and extremely helpful anecdotes, including how the position of “High Tech Anthropologist” has become an essential part of the organization (and why, if you’re working on anything to do with change, it should be part of yours).

Truly, this is a book that you’ll want to keep as a reference to what is possible in a world dominated by Scott Adams’ “Pointy headed boss” of Dilbert fame.

Especially useful is how Sheridan and his Menlonians deal with problems that even the most creative and revolutionary systems can’t escape. Mistakes and how a company like Menlo deals with them are as instructive as anything else in “Joy.”

The process of hiring new employees is another area where Menlo has taken a different (and seemingly more direct) route to success.
Sheridan writes in detail how relying on the individual and combined wisdom of team members, including using the pairing concept throughout the hiring process, produces enviable results.

But the very fact that there are multiple numbers of applicants for each open position also says a lot especially when you consider that Menlo doesn’t advertise its openings.

What it does do is a lot of networking, including teaching its systems (both for pay accounting for as much as 10 percent of the company’s revenues and “just because”) and the natural expression of energy a company like Menlo generates in the software industry and Ann Arbor in general.

The firm has also developed strong ties to the University of Michigan community, highlighted in “Joy” stories like the visit by Dr. Jim Bagian, a physician, professor, engineer, business process expert and astronaut, who talked to the Menlo team about the 337 hours of time he logged on space shuttle missions. “His joyful desire to be part of something big taught us about mission, purpose, and sacrifice,” writes Sheridan.

“Joy” is a book worthy of your time. But even more, it’s a blueprint for what your company or the company you call home could be with the kind of energy, vision and commitment Richard Sheridan describes in detail.