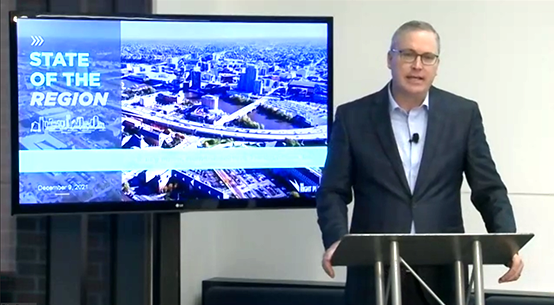 Despite the devastating impact the COVID-19 pandemic has had on state and local economies the last 18 months, Michigan and the Grand Rapids region appear to be recovering fairly nicely.

That’s the assessment coming out of The Right Place’s 25th annual Economic Outlook report, delivered Thursday in a virtual presentation from Randy Thelen, the new president and CEO of The Right Place, and Donald Grimes, regional economic specialist at the University of Michigan.

“This is an economically cloudy time, no question,”said Thelen, who replaced longtime president/CEO Birgit Klohs on March 1. “Nobody here has ever gone through an economy quite like this.”

Thelen delivered a thorough look at the year in review and a state-of-the-region report, particularly in the eight-county region The Right Place serves.

During his presentation, Grimes did an analysis and a 2022 economic forecast of the U.S., Michigan and regional economies.

And both were fairly optimistic. Among the observations Grimes noted:

“The unemployment rate would be much higher except for the fact that many of the formerly employed workers have dropped out of the labor force, which is down by 1.5 percent in the U.S. and 3.4 percent in Michigan since February 2020,” he said.

Thelen, meanwhile, pointed out that the pandemic left The Right Place well behind most of the economic goals and markers it set last year. As the second year of the three-year plan (2020-2022) winds down, though, all of the organization’s goals are within reach.

Last year was the first year of its three-year plan, and “hitting our objectives was quite difficult.”

The Right Place was a leader in the fight against the spread of covid, with members “standing tall and meeting the needs” of the community, Thelen said.

“But it did create an economic headwind that was too much for us to overcome. As we ended up 2020, we were behind the curve in terms of our objectives,” he acknowledged. “This year … stakeholders in the organization really stepped up, the business community made bold decisions and as a result we are now ahead of plan on every one of our core metrics.”

In 2021, the organization’s work has resulted in:

Since the start of the plan in 2020, the organization’s work has resulted in:

“The pandemic and the economic recovery … is truly, truly unprecedented,” Thelen said. “For us to bring forward an economic outlook … ultimately will help drive better decision-making by our businesses across the region.”