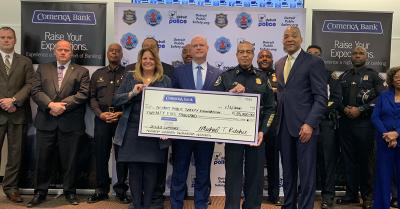 The Detroit police force, formed more than a century ago, has protected and served the Motor City as it grew and evolved. Around the same time, a small financial services firm calling itself Comerica Bank started up to aid in that evolution.

Comerica Bank, a subsidiary of Comerica Incorporated, has served Michigan longer than any other bank with a continuous presence dating back 170 years to its Detroit founding in 1849. It is the largest bank employer in metro Detroit and has more than 4,700 employees statewide.

Dozens of members of metro Detroit’s law enforcement community, including Detroit Police Chief James Craig, attended the ‘Back the Blue’ ceremony. The event showcased Comerica Bank’s commitment and appreciation for those who serve and protect the community. Other dignitaries, including Wayne County Sheriff Benny Napoleon, Michigan State Police First Lt. Michael Shaw, Wayne State University Police Chief Tony Holt and representatives from more than a dozen local, state and federal agencies and corporate partners were in attendance as well.

“Local law enforcement officers are the backbone of our communities, keeping us safe day in and day out,” Mike Ritchie, president of Comerica Bank – Michigan, said in a statement. “This is our way of recognizing their invaluable work and saying thank you to the men and women who serve and protect.”

Working together
Police officers, firefighters, border patrol agents, security guards and others who are sworn to protect the public every day were honored at the inaugural ‘Back the Blue’ campaign. The event was spearheaded by Comerica Bank, the Detroit Public Safety Foundation and other community businesses and partners.

“We’ve had great success, thanks to our community partners, in ensuring the departments are able to cover these unbudgeted but very important needs,” Patti Kukula, executive director of the Detroit Public Safety Foundation, said in a statement. “We are honored to help in any way to make our first responders safer, stronger and, most importantly, feel appreciated.”

Launched in 2003, the Detroit Public Safety Foundation strives to help the Detroit Police and Fire Departments initiate innovative programs that make Detroit a safer place to live and work. The nonprofit is dedicated to creating a better future by improving the health, safety and welfare of citizens and visitors to Detroit through support of Detroit Police, Fire and EMS with technology, training, equipment, community outreach and wellness. Every year, the Detroit Public Safety Foundation secures grants and funding from community partners, such as Comerica, so the Detroit Police and Fire departments can purchase items that are not covered in the city budget.