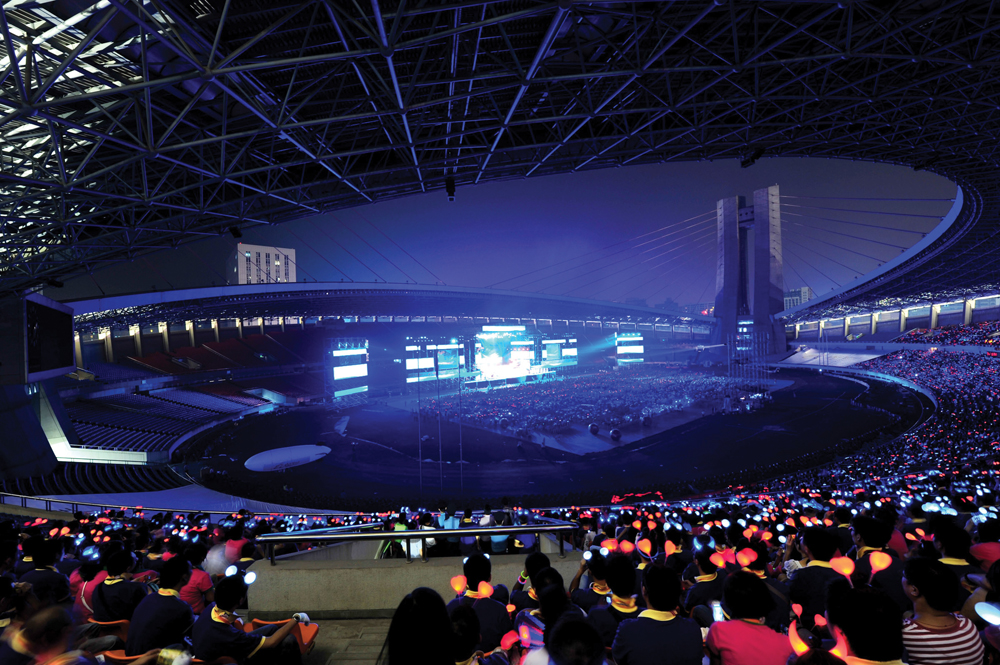 China’s e-commerce giant Alibaba Group is one super-sized sales and profit opportunity for businesses from all over the globe. Bottom line: The online platform allows access to 1.4 billion potential buyers in China; it is similar to Amazon, eBay and PayPal but bigger than those three combined.

“The Chinese are looking to invest more than $2 trillion globally over the next decade and are looking to buy products from around the world to fill their need,” said Tom Watkins, Michigan Economic Development Corp. adviser. “They will be buying items from technology to food.”

The talk swirling around this sales and marketing machine is a continuation of the conversation focusing on strengthening business relations with China.

Founded in 1999 by Jack Ma, a former English teacher based in China, Alibaba started out as a way to give small businesses a level connection to consumers. Since its founding, Alibaba Group has spawned numerous different entities and soared to claim the largest initial public offering in New York Stock Exchange history – raising $25 billion.

Most consumers and sellers are familiar with Alibaba.com, the first business of Alibaba Group, where buyers can find anything and everything from beer and clothes to electronics and industrial parts.

Huang said Alibaba Group manages the online marketplaces and charges a commission for sellers to list products, but they don’t actually sell any merchandise themselves.

This model keeps us lean and allows us to focus on building a strong technology infrastructure that supports the billions of transactions on our various platforms,” she said.

Alibaba Group entities and companies
While most are familiar with Alibaba.com, the span of Alibaba Group stretches much further with various other business units having been developed since the initial launch.

• Taobao: An online consumer-to-consumer marketplace that mirrors eBay, but without the bidding auctions. It was launched in 2003. All products have a set price. In 2013, Taobao was China’s largest online shopping destination, according to an Alibaba Group press release.

• Tmall: Tmall offers global high-end brands direct from business-to-consumer. It was launched in 2008.

• Juhuasuan: A group buying site that offers products and services at largely reduced prices on the condition that a minimum number of buyers purchase the products within a set amount of time. These flash sales can last from a day to a month. Launched in 2010.

• AliExpress: A platform that allows consumers to buy directly from wholesalers and manufacturers in China. Launched in 2010.

• Alibaba.com: A wholesale marketplace that serves buyers and suppliers launched in 1999. It allows small businesses to sell wholesale products around the world. Sellers are typically manufacturers and distributers.

• 1688.com: Another wholesale marketplace that focuses just on wholesale within China, while Alibaba.com focuses on wholesale globally. Launched in 1999.

• Ant Financial: A financial services provider that encompasses Alipay, Alipay Wallet, Yu’e Bao, Zhao Cai Bao, Ant Micro Loan and Sesame Credit. Alipay is similar to PayPal but allows buyers to verify if they are happy with products before releasing the money to the sender.

• China Smart Logistics: A platform that provides real-time information to buyers and sellers and allows delivery system providers to improve their efficiency by accessing the information. • eTao: Offers comparison shopping by searching most Chinese online shopping sites and comparing prices for a particular product against each other.

• Aliwangwang: An instant messaging software that allows customers and sellers to communicate. It has to be downloaded like as an app to consumer computers or phones.

Why companies should use Alibaba
Alibaba allows sellers to access 1.4 billion people living in China as potential buyers. The Alibaba platform is free for consumers and shopping can be done at either Chinese companies or companies outside of the country.

It is the most popular site in China and the country includes one fifth of the world’s population—that’s a direct connection to a massive pool of consumers.

“Alibaba bodes well for both big and small businesses in Michigan,” said the MEDC’s Watkins. “China is the fastest growing economy in the world and over half a billion people have moved from poverty to the middle class and when people have cash in their pocket they buy things.”

Developing markets are more beneficial and profitable for entrepreneurs than already developed markets such as Western Europe and North America, Xu explained.

Watkins said products from manufacturing goods to agriculture to Shinola watches are popular products that Chinese buyers are looking to purchase from the United States.

“The Chinese skipped the landline phone and dial-up Internet connection generation and went right to mobile,” he said. “Alibaba took advantage of that large mobile usage to tap into global commerce.”

Watkins said the skyrocketing IPO generated massive international attention in the past year, attracting even more users to the site. The high IPO gained the trust of many new site users.

Buyers looking to buy the best product at the best value, regardless of where it comes from means Alibaba can be an avenue for Michigan sellers to profit, Watkins said.

For example, since the majority of the young Chinese population purchases food and groceries online, Michigan can offer fresh agricultural products, shipped directly to buyers’ doors.

“Think of everything we have in Michigan, all the products we produce. If we use it ourselves, the Chinese use it. They have the same needs and we can market on that,” Watkins said.

“The shift in the Chinese economy from being largely agricultural to industrially driven, along with consumer distrust of local goods, has led China to rely on foreign countries to supply them with the high quality, nutritious and convenient food that consumers seek,” Zmitko-Somers said.

How companies can profit
Xu said Alibaba.com is more of a business-to-business marketplace. It is meant for companies that want to sell their products to other businesses all over the world.

Xu said for American companies that wish to bring their brands to primary consumers they should focus on selling products on Tmall.com.

“Tmall.com only orders direct from manufacturers so fraud is reduced next to zero,” he said. “Chinese consumers trust Tmall.com. Even some of the world’s largest brands do not have their own websites in China and use Tmall.com exclusively.”

For companies to be profitable, consumers have to trust sellers. “People have got to see and trust that the goods will be quality,” Watkins said. “Alibaba has similar functions to eBay like the “buyer beware” function, but buyer-seller relationships still need to be built.”

Companies can build trust by focusing on building their brand.

“Chinese consumers are very brand conscience,” Watkins said. “They would rather buy products from Grand Rapid’s Amway and have it shipped overseas than buy a cheaper version down the street from them. They want the brand.”

“Think about your own buying habits,” Watkins said. “You are more likely to purchase a car or go to a restaurant if you received a suggestion from a friend for that particular product.”

For example, former President Bill Clinton wears and has purchased several Shinola watches after visiting the Detroit site in 2014. That put his stamp of approval on it, and young Chinese consumers’ interests were piqued. Consumers like nice products; brand names equate to status.

“Before Alibaba, sellers went to China and built relationships and pitched their products,” Watkins said. “But at the end of the day, relationships still matter.”

“The governor and the MEDC have adopted two policies that the state is focusing on,” Watkins said. “The first is to sell Michigan goods and services whether it be sugar beets to cherries to cars to China. The second is to seek Chinese foreign direct investment in Michigan.”

Since the policies have been adopted, Chinese investors have purchased the old Free Press building in Detroit, Nexteer Automotive, a Chinese company, has located in Michigan bringing high level jobs, and Oakland County schools have started teaching Chinese as a language to students, which has made Oakland County look even more marketable to Chinese companies.

Business with China has to be a two-way bridge, with both selling and receiving, experts say.

“The governor has set the right tone,” Watkins said. “He has been building bridges with China and those who want to do well on Alibaba have to build relationships as well.”

Product authenticity
Xu said there have been authenticity issues with Alibaba Group resulting in a plethora of copy-cat products.

For example, a much talked about authenticity issue focused on Zeeland, Mich.-based Herman Miller. Sellers taking advantage of the Alibaba sites were selling $75 Herman Miller-type chairs that semi-replicated the real thing that was priced at $689. “Alibaba.com continues to enhance its trust and safety measures,” Huang said. “We have three types of supplier members: gold suppliers (paid), verified members (free) and free members. We recommend buyers to look for gold suppliers and verified members because they undergo strict authentication and verification processes. We also recommend buyers to do business with suppliers who have ‘Supplier Assessment’ and ‘Onsite Check’ symbols on their profiles.”

Huang said if Alibaba receives complaints about counterfeit goods, the sellers are penalized swiftly. Alibaba forces the seller to reimburse the buyer, assess seller penalties and possibly limit the sellers’ future listings, or permanently ban the seller from Alibaba.

Huang said Alibaba is in the process of adopting a “name and shame” policy as well in order to notify future buyers of sellers’ fraudulent history.

As for companies who are selling on Alibaba who believe their IP address has been compromised, they can file complaints using AliProtect, Alibaba’s online IP protection system.

“We use data technology to analyze and track infringing products and identify hotspots for counterfeit distribution sales,” Huang said. “We work closely with Chinese public security, copyright and quality inspection.”