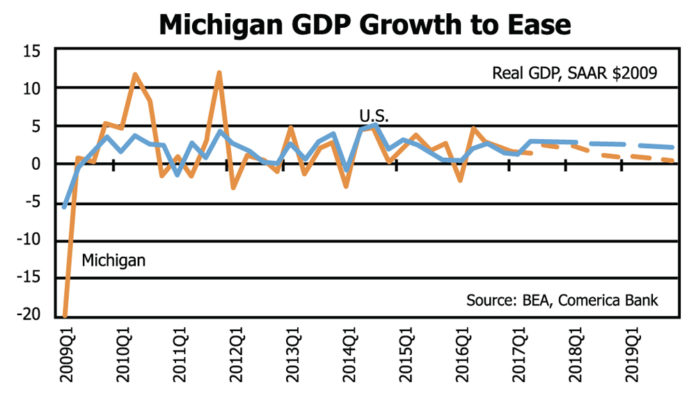 Economists are expecting 2018 to be a year of continued modest growth, with most expressing confidence in basic indicators for the national and state economies. The Federal Reserve’s December 13, 2017 decision to raise rates for the third time during 2017 reflected confidence in the economy’s strength and control of inflation.

The University of Michigan, through its Research Seminar in Quantitative Economics, describes Michigan as being in its ninth year of economic recovery, having created an average of 70,500 net new jobs per year from the previous recession’s low point in the summer quarter of 2009. The state’s annual growth rate of 1.7 percent outpaced that of the 1.5 percent nationwide.

For 2018, UM economists see continued progress. “The outlook extends the recovery period to over 10 years—among the longest continuous stretches of job growth in Michigan since the Great Depression.” UM economists forecast 0.9 percent job growth during the first half of 2018 and 1.0 during the second half—a gain of 40,900 jobs. Local inflation, measured by the Detroit CPI, is estimated at 1.5 percent. Personal income growth is projected to increase by 4.4 percent in 2018.

Comerica economists view 2018 as a transition year for the Michigan economy, with a leveling of auto sales, which peaked at 18.8 million units in December 2016, and then “a return to a normal late-business-cycle gradual decline.” Economist Richard A. Dye predicts a 2.1 percent change in real GDP for Michigan with personal income growth of 4.8 percent and unemployment at a low 3.5 percent. While Michigan’s unemployment rate has been lower than the national rate during 2017, the state still has not recovered thousands of the jobs lost during the Great Recession. And its relatively positive economy lags that of several of its neighbors. According to Michael J. Hicks, Ph.D., director of the Ball State University Center for Business and Economic Research, “Michigan’s economy continues to underperform the nation and the Midwest, with growth hovering between 1.1 and 1.6 percent through the forecast horizon.” According to his analysis, Grand Rapids has been leading the state and nation in recovery from the Great Recession, as indicated by employment growth. Grand Rapids has returned to pre-recession levels of manufacturing employment, unlike Michigan and the U.S. as a whole.

“Grand Rapids is a standout in Michigan and the country. Unemployment in west Michigan is 3.6 percent and in Michigan it is in the upper 4s,” Robey says.

He forecasts an increase of 0.7 percent for total 2018 employment in the Grand Rapids MSA, above Michigan, but less than the U.S. He expects the gross regional product for west Michigan to increase by 1.8 percent next year.

“Their manufacturing sector recovered very fast after the recession. Grand Rapids has a great product mix with a strong economy in automotive parts and office furniture. Both are doing well,” he explains. In addition, he says, the local economy has significant design and engineering components.

Consumer Sentiment Is Generally Positive
Optimistic consumer sentiment provides a positive foundation for future consumption and economic growth. Consumers are generally positive about their economic future, according to the University of Michigan Survey of Consumers, based on preliminary published results from their November 2017 survey. “Improved finances were reported by 51 percent of all consumers in November, just below the 17-year high of 53 percent in October,” according to survey results.

Consumers were optimistic about their financial prospects for the year ahead, with an annual income gain of 2.1 percent expected in both October and November, the best two-month average since 2008. Rising home values were cited by two-thirds of homeowners and 60 percent thought the probability was better than 50-50 that stock prices would continue to rise next year.

Will Tax Reform Stimulate Business Investment?
Congress has just approved and President Trump has signed a major tax reform law that reduces the corporate tax rate from 35 percent to 21 percent. Its supporters claim this will stimulate “repatriation” of overseas investment by American companies.

Some economists are cautious in assessing the bill’s potential impact as a business stimulus. Deloitte’s U.S. Economic Forecast for 3rd Quarter 2017 stresses that businesses make investment decisions based foremost on the cost of capital and product demand. “Even a relatively radical tax reform would not likely translate into a very large change in the cost of capital, which also depends on overall financing costs, depreciation rates, and the expected cost of capital structures and equipment in the future. And research on business investment indicates that current (and future) demand is the main driver of investment in any event,” the forecast states.

Richard Dye, the Comerica economist, is more positive about the impact of tax reform on business growth.

“We do see American companies repatriating jobs from outside the U.S. Reduced taxes could generate payouts in dividends and wages, as well as business investment and stock buy-backs. Tax reform will be helpful to corporations and stock market performance,” he says.

However, Comerica’s December 2017 U.S. Economic Outlook cautions that pressure on the federal deficit resulting from the newly approved tax cuts could jeopardize the Trump Administration’s promise of major investment in infrastructure. Also, the analysis suggests that if federal revenues to states and local governments are reduced due to tax reform and a higher deficit, these government entities may seek compensating tax increases—potentially limiting business investment and personal spending.

The Global Economy
Several economic forecasts mention uncertain political conditions in Saudi Arabia, a major oil producer, as a possible issue in 2018. However, concern over potential oil price hikes is mitigated by several positive changes. First, the U.S. continues to reduce its dependence on foreign oil sources. In addition, the capacity of American oil wells that are “drilled and ready to go is huge,” says Robey.

In the past, he says, a spike in gas prices might have shifted consumer preferences from trucks and SUVs to smaller, more fuel-efficient cars. But now, most vehicles, regardless of size, achieve better mileage so buyers are less price-sensitive when gas costs increase.

While the uncertainty of oil prices may not be that threatening to the auto industry, potential changes in international trade agreements, especially NAFTA, could have a substantial impact on car production and pricing. The Trump administration has expressed strong interest in rewriting trade agreements with the stated goal of “leveling the playing field” for all trade partners and discouraging American companies from relocating jobs overseas.
Deloitte economist Daniel Bachman considers trade issues as a potential driver of slower growth.

“The auto sector in particular is most affected by NAFTA. A breakdown would have a short-term impact on the auto industry and the economy with reduced hiring and growth,” he says. However, Bachman suggests that even if the treaty “goes away,” its enabling legislation might remain and the issue might go to court. Robey suggests a reversal of NAFTA could be disruptive to automotive and supplier production, some of which could move to Asia.
Despite uncertainty about the impact of tax reform and trade agreements, economists are generally confident of continued modest economic growth for 2018. Deloitte’s Bachman expects continued job growth and strength in Europe.

“That is good for us,” he says. “Capital is flowing back into Europe and the dollar is falling, which is positive.” Deloitte’s baseline estimate for 2018 calls for 2.4 percent growth in U.S. GDP with a probability of 55 percent.

Comerica grades the 2018 economic outlook as a “B” because of forecasted real GDP growth of 2.8 percent. Dye says that a higher grade would require consistent strong GDP growth of more than 3 percent.

The University of Michigan’s RSQE forecast calls for U.S. GDP growth of 2.5 percent in 2018, noting that this is less than what was assumed in President Trump’s budget proposal. Their 2018-2019 outlook states, “We expect all major private components of domestic final demand to expand at a robust pace over our forecast horizon. The likely passage of deficit-raising tax cuts will put downward pressure on federal government spending growth during our forecast horizon.”

Estimates of the increase in inflation, as measured by the CPI, are in the 1.7 to 2.1 percent range. The Federal Reserve’s inflation target is below 2 percent. Further decline is expected in the national unemployment rate in what some already consider a “full employment” labor market.

Stability and modest growth seem to define economic expectations for 2018—both for Michigan and the national economy.