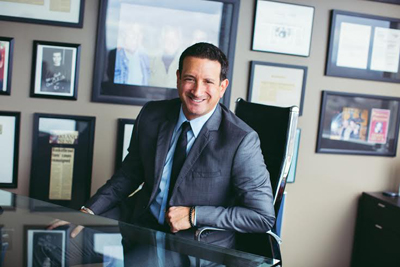 There are voices that stick in your memory – locally, people including Sonny Eliot, Ernie Harwell and Paul W. Smith immediately come to mind.

Here’s an up-and-coming voice to add to that list – Neil Rockind. The criminal-defense attorney has a hidden talent for sports announcing, and he wouldn’t mind seeing his talents become a little more public in the future.

Rockind is founder of Southfield-based Neil Rockind PC, a criminal-defense law firm. He serves as announcer at his son’s football games and believes professional sports organizations should consider hiring him to announce big-time games as he is that good at it.

“I grew up in a University of Michigan football household,” Rockind said. “When I was a baby, my parents took me to all of the Michigan games. … One of my first memories is of those announcers at Michigan stadium with their deep baritones, calling the plays.

“One of the most significant things the announcer would say to get you in the spirit was at the moment the band would be at the edge of the tunnel. As they ran out, he would say, ‘Bannnnnnnd, take the field!’ It sent shivers up my spine every time,” Rockind recalled.

So when Rockind was approached to do some announcing for his son’s football games with the Birmingham Patriots, he was more than happy to volunteer.

“I love it,” Rockind admits. “The best part is getting the crowd involved. You’ve got to get people cheering. But you also have to do announcements and advertisements, like for the concessions stand or merchandise. You have to find new ways to say it each time to get people’s attention, maybe make them laugh.”

Rockind feels he may have missed his calling as a professional announcer, that’s how much he enjoying it. He even volunteers for the football program when his son isn’t playing.

“I watch these kids play as I announce their games, I love to call out their names. I can see these kids enjoying the moment, and I love it. I’m so impressed with their ability to stand up and deliver in the moment,” Rockind said.

But he knows that his success as an attorney is tied into his love of public speaking, quick timing and sense of humor. Rockind received his education from Bloomfield Hills Andover High School (Class of 1986); the University of Michigan (Bachelor of General Studies, 1990); and, Wayne State University Law School (Juris Doctor, 1993).

Rockind’s talents as a trial lawyer were honed during his tenure as an Assistant Prosecuting Attorney in the Oakland County Prosecutor’s Office, one of the most famous prosecutor’s offices in the country. Rockind was an assistant prosecutor from 1993 to 1997 and handled thousands of criminal cases, many of which resulted in jury trials. Due to both his record and his ferocity, Rockind gained the moniker, “the Rockweiler.”

As a prosecutor, Rockind quickly became a special prosecutor, the title given to prosecutors who were specifically assigned to handle complex and high profile cases.  As a special prosecutor, he handled the most complex and high profile cases in the office, including but not limited to People v Kevorkian (the prosecution of famed assisted suicide advocate Jack Kevorkian), People v Horton (the prosecution of a pastor charged with taking clandestine videotapes of his parishioners in the bathrooms of his church) and People v Mayhew (a groundbreaking vehicular homicide case). Rockind also prosecuted many high level drug dealers, including one of the few cases resulting from an Oakland County Citizen’s Grand Jury indictment.

In 1997, Rockind made a change:  he pursued a career as a criminal defense lawyer. In private practice, Rockind has handled countless high profile cases. He has represented clients in matters ranging from drunk driving to complex federal cases. He has represented lead defendants in cases involving no notoriety whatsoever and others, such as the infamous Basketbrawl (Piston v Pacer) assault case (in which he obtained the only dismissal) and the investigation into noted attorney Geoffrey Nels Fieger, that has garnered national media attention.