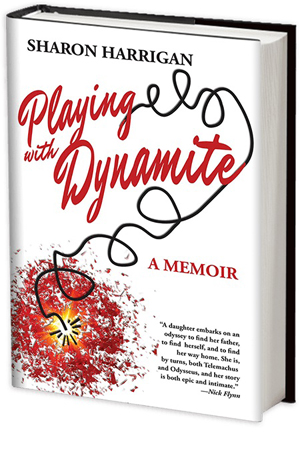 Sharon Harrigan is the author of “Playing with Dynamite: A Memoir” (releasing October 1, 2017). Kirkus Reviews calls it “a warm, engaging read about the ways in which memory distorts our understanding of family.” Her work has also appeared in the New York Times (Modern Love) and elsewhere.

Harrigan will be reading at Literati in Ann Arbor on September 29, the first stop on her book tour. Her memoir is about her quest to find out how her father really died, why he blew off his hand with dynamite before she was born and why she was afraid to find the answers to these questions.

During this two-and-a-half year odyssey, Harrigan also discovered what kept her away from Michigan, and she found a way to finally, happily, return. So her reading—and the book—are a kind of homecoming.

Q: What is your connection to Metro Detroit?

A: I was born Downriver, in Lincoln Park, near the southwest border of Detroit. I lived in the same house until I was 18 and moved to New York City to go to college and then to take a job in publishing. I have family in Eastpointe, Livonia, Dearborn, Carlton and Farmington Hills. During adolescence, I spent a third of my time at Lincoln Park High School, a third at the Lincoln Park Public Library, and a third at the Detroit Institute of Arts, attending poetry classes and readings in a series called LINES, run by George and Chris Tysh, who now teach at Wayne State and at the College for Creative Studies. My mother is a huge Tigers fan and doesn’t miss a single game. Much of my new book is set in metro Detroit—including scenes in the old Tiger Stadium and the new Comerica Park.

Q: Why writing and what do you get out of it?
A: I don’t do it for the money! I started as a poet, after all. Though some authors, like J.K. Rowling, have used their writing to lift themselves out of poverty and into great wealth, I don’t think most people become writers so they can get rich.

I started writing because I love to read. It’s a thrill to be transported to a different world through a book. My teenage daughter reads Frank O’Hara’s Lunch Poems whenever she’s sad, can’t get to sleep, or needs to calm down. Books give us a window into something bigger than ourselves, and they allow us to feel more connected and less alone.

I started writing a memoir because other memoirs I’d read made me feel understood, in a profound and uncanny way—especially memoirs about larger-than-life fathers, such as Jeannette Walls’ The Glass Castle, Mary Carr’s The Liar’s Club, and Allison Bechtel’s Fun Home. Those three books, of course, did make a lot of money for their authors. One was turned into a movie and the other into a hit Broadway musical. So, I can always dream!

My favorite quote from another writer about why she writes is this one, from Sarah Manguso: “The purpose of being a serious writer is not to express oneself, and it is not to make something beautiful, though one might do those things anyway. Those things are beside the point. The purpose of being a serious writer is to keep people from despair. If you keep that in mind always, the wish to make something beautiful or smart looks slight and vain in comparison. If people read your work and, as a result, choose life, then you are doing your job.”

Q: What advice would you give about writing to people who are interested in expanding their careers through essays or even a book?
A: Start small. Trying to write a book—or even an essay—might seem overwhelming at first. My book started with a blog post, which turned into an essay, which (eventually) grew into a book. The trend seems to be away from blogs and more towards e-newsletters these days, but the idea is the same—small, manageable chunks that give you practice and the immediate gratification that people will read your work right away and even respond to it.

It’s a tough market, and the competition can be pretty fierce, so be patient and not too hard on yourself. One way to get publication credits to build your resume is to pitch magazines and journals about doing book reviews and interviews.

Take classes and join a writing group. You can probably figure things out by yourself, but it will take so much longer that way. Want to write magazine features? There’s a class specifically for that. Screenplays? Children’s picture books? That, too. If you can’t find a class locally, there’s sure to be one online. And there are also a wealth of writing conferences for a weekend or a week that you can attend during the summer.

Writing is like any kind of art form–you need practice to get better. That’s another way that writing a blog or e-newsletter can help.