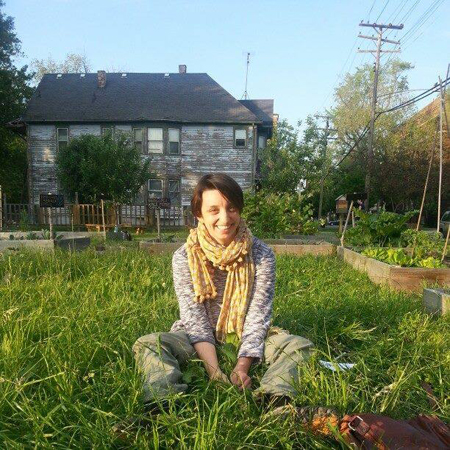 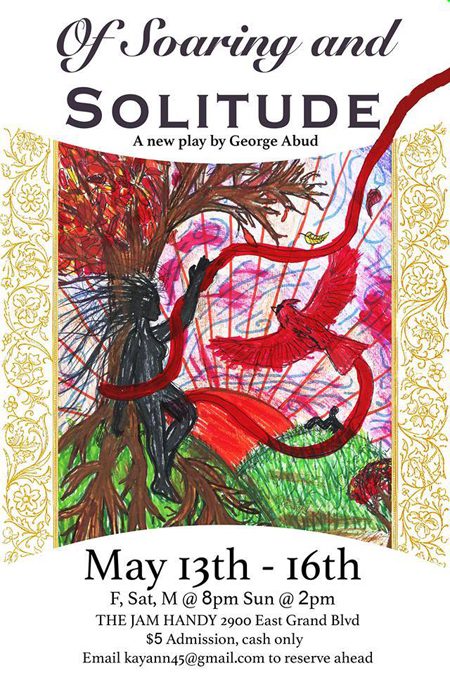 When your best friend asks you to trust them, to take on a new project and try something you’ve never done before, what do you say? If you’re Siena Hassett, the answer to all of those questions is an enthusiastic “yes.”

That is why Hassett, a Wayne State University graduate and experienced actor, is working with longtime friend George Abud to co-produce his first play, “Of Soaring and Solitude.” Hassett has never produced a show before, either. So what they are creating this weekend at Detroit’s Jam Handy is truly a premiere event in every sense of those words.

“It was so much work in a way that I’m not used to; I’m used to just showing up,” Hassett said with a laugh. “As the co-producer, I had to find the space, find the money and find people to do the show. It was amazing.

“I would definitely do it again, but it was so hard. It’s also super rewarding,” Hassett added. “It makes you feel even more connected with the project. And the city, too. I had to talk to people with cool artist spaces and explain that we didn’t have much money to spend and see whether we could work together. … I have acquired so many more skills.”

But learning to trust – trust in yourself, your friends and your future – is a key component to this story, both on stage and in real life, Hassett said. It somewhat parallels not only her life, but the story of what is happening around her and in the city.

“These characters are being awaken to the things they’re afraid of, afraid of getting older, not knowing what they want to do with their lives, being adults,” Hassett said.

Some background: Abud also is a Wayne State alum and a Broadway actor. The new playwright created “Of Soaring and Solitude” as a study of his years in his 20s along with those of his friends. The ensemble in the Detroit Premiere are, in alphabetical order, Alexis Barrera, Kate Foster, Hassett, Samantha Moltmaker, Joshua Daniel Palmer and Alexander Trice.

Of Soaring and Solitude is about four people in their 20’s – two men, two women – each with birthdays approaching, which hurls them into an existential crisis. The play explores their various predicaments and grapples with life’s looming questions, particularly for 20-somethings.

Throughout the performance, the characters question everything. What does it mean to be an adult? How does one break free of the gravitational pull of past memories? How does one prepare for the future without sacrificing the now? It’s something that generations from the millennials to generation X to baby boomers can related to, Hassett said.

Having the Jam Handy as the performance space proved fortunate as well, Hassett said. The area is raw and unfinished. That allows the players to move across the entire room to tell their story. The actors interact with materials and objects from the space throughout the entire play, which creates, manipulates and destroys the set design before the audience’s eyes.

In the end, the audience is left with a collage experience that allows them to linger and consider how the same questions and challenges pertain to their own lives.

“I think it’s a story that applicable to any age,” Hassett said. “I was talking to someone recently who just turned 40, and they said, ‘I feel like I’m just starting to know myself and who I am.’ This is the kind of play that makes you question what’s important in your life. … It’s about the importance of family, courage and imagination.”