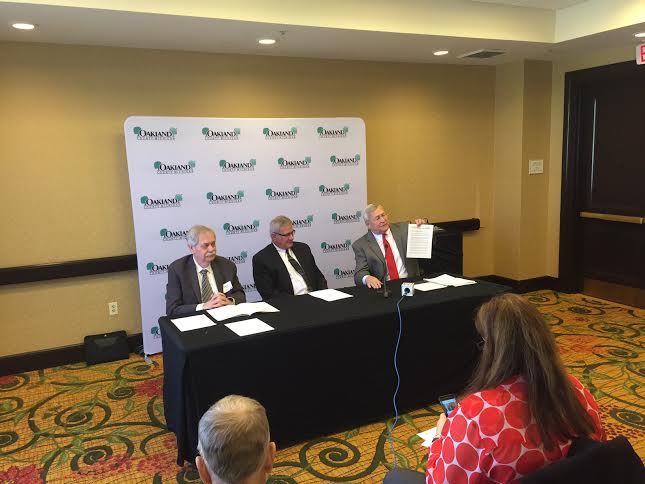 After nearly a decade of extreme lows and highs, Oakland County in Michigan is in its seventh year of economic recovery and will show “moderate, healthy and sustainable” growth through 2018, according to the University of Michigan Institute for Research on Labor, Employment and the Economy.

As a result, Oakland County is likely to enjoy continued job growth, lower unemployment rates than the state or the nation as well as gains in high-wage industries, the U-M report showed. The report was unveiled Thursday at an event with County Executive L. Brooks Patterson in Troy. 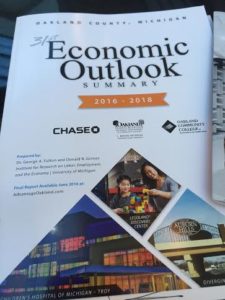 For 30 years, Dr. George Fulton and colleague Don Grimes have updated Oakland County on its overall economy. Fulton, Grimes and Patterson held a press conference with media and a luncheon with community, governmental, business and non-profit leaders to go over the annual report and discuss opportunities going forward.

Oakland County’s momentum is impressive considering how much it was affected like the region and the nation from the freefall of 2008 and 2009, Grimes noted. Today, the county’s steady growth is a sure sign that things are moving positively now and into the future, he added.

“I don’t think you can overstate how much of an improvement we’ve had over the past seven years and going forward,” Grimes said.

Fulton noted Oakland County is showing sustained job growth, falling unemployment, growth in inflation-adjusted wages and moderate overall inflation. These four areas are key to any county or state’s success, and his forecast predicts the county will continue to have strong growth in the near term.

Patterson lauded the many businesses who call Oakland County home for being “creative and innovative,” acting quickly to seize opportunities when they’re available. He said the county is working toward having a “knowledge-based economy,” focusing on growing industries. As a result, the makeup of Oakland County’s biggest businesses has changed; whereas General Motors was once the county’s largest employer, now healthcare and Beaumont ranks as the top.

Other report highlights include:

•    Oakland County’s job growth over the past seven years has been 15.2 percent, outpacing the nation at 8 percent and the state at 9.6 percent.
•    The county is expected to add about 44,000 jobs through 2018, mostly in high-wage industries such as testing labs, merchant wholesalers in durable goods, engineering services, management and technical consulting services.
•    High-wage industries with average annual wages of $75,000 or more will account for 35 percent of the job gains in Oakland County over the next three years.
•    Oakland County’s unemployment rate of 4.9 percent last year fell below the U.S. rate of 5.3 percent. The county’s unemployment rate is forecast to drop to 4.2 percent this year, 3.7 percent in 2017 and 3.3 percent in 2018.