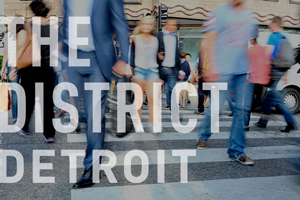 When a Detroit developer uses phrases like “charming,” “walkable” and “urban” in the same sentence about the city, you know that they’re excited about the project they are working. When that developer is Christopher Ilitch, you’ve got to stand up and take notice. That’s because Ilitch is part of one of the most well-known families in Michigan; he also is the guy who knows everything there is to know about The District Detroit, the massive entertainment complex that will help cement the city’s revitalization.

Ilitch spoke Nov. 5 on the Wayne State University campus within the McGregor Memorial Conference Center about The District, his admiration for the city’s turnaround and his hopes for this region over the long term.

“Every time I’m here (at WSU and the city), there’s something new and different. I see constant progress and growth,” said Ilitch, who noted that this positive momentum is good not only for WSU students but also for the city’s residents. He told the crowd of WSU students, faculty and guests that he believes The District will offer “world-class venues” with a “Come Out, Be Amazed” brand promise. He added that the Ilitch family has been acquiring parcels for The District for 13 to 14 years; they got started on it right after they completed the plan for Comerica Park.

Some background: The District Detroit will be 50 blocks of businesses, parks, restaurants, bars and event destinations. It will be home “to the young and the young at heart, families, new residents and long-time residents who want to be where the action is”, according to its website.

Here’s the best part: The District will connect Downtown and Midtown into one contiguous, walkable area, where families, sports fans, entrepreneurs, job seekers, entertainment lovers and others who crave a vibrant urban setting can connect with each other and the city they love.

The new arena, which will house the Detroit Red Wings and its related organizations, will anchor one of the five neighborhoods in The District. Each neighborhood will have its own distinct personality, expressed by the following working names:

•    Columbia Street – A neighborhood near the Fox Theatre and the Fillmore Detroit that offers entertainment and dining at its finest.
•    Wildcat Corner – This neighborhood, anchored by Comerica Park and Ford Field, will offer energetic, athletic experiences at their best.
•    Woodward Square – The bustling home of the new Detroit arena.
•    Cass Park Village – An energized, eclectic and primarily residential neighborhood.
•    Columbia Park – A fresh, modern neighborhood anchored by a new public green space.