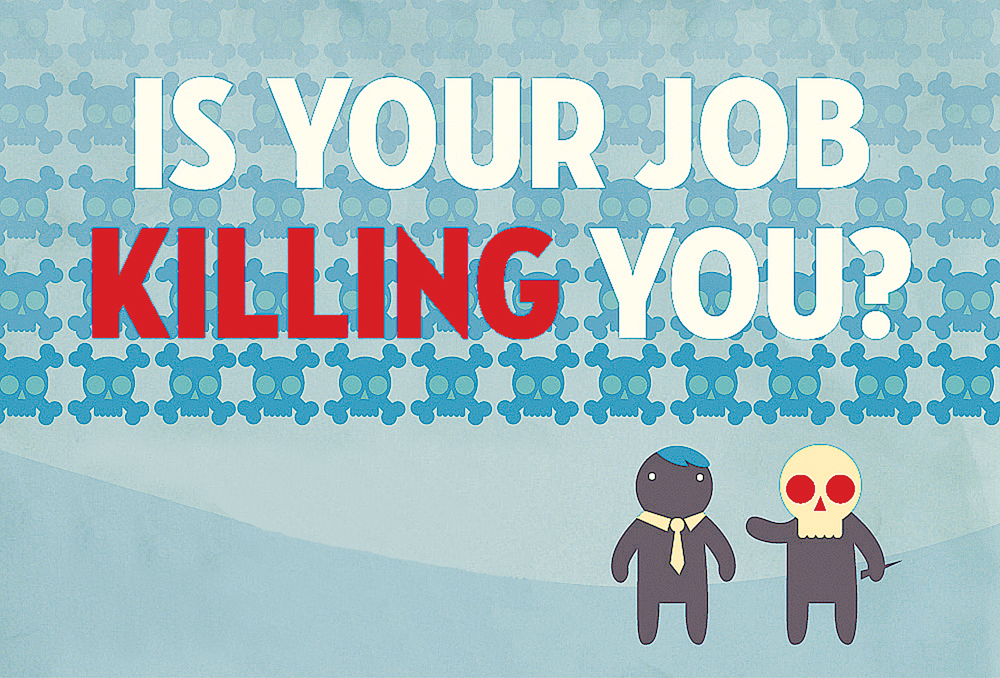 When news of Oscar-winning actor and comedian Robin William’s suicide shook the nation in August, the tragedy sparked a national conversation about depression, bringing to light some of the harrowing realities of the illness.

Despite longtime efforts to raise awareness about depression, the disease still carries a social stigma even in the 21st century. In fact, many still see depressive disorders as a personal weakness instead of a serious health condition.

This stigma, experts agree, is often the sole barrier to identifying and treating the disease on a larger scale—to the point where depression goes largely untreated and becomes a hefty economic burden as well as a social one. In 2000, depression cost the U.S. economy $83 billion. Of that, $52 billion was due to lost workplace productivity, according to the Journal of Clinical Psychiatry.

Known by many names due to the stigma it carries, depression underlies countless health problems. Yet many American businesses do not have effective strategies in place to combat a disease that affects one in six people, experts say.

To put it in perspective, depression is the second most costly disability in the U.S., trailing only heart disease, says John Greden, executive director of the University of Michigan’s Comprehensive Depression Center in Ann Arbor.

Still, the stigma tied to depression makes it hard for people, especially in workplace settings, to discuss it openly, and that leads to all sorts of costly consequences like misdiagnoses and absenteeism, Greden said.

He says progress in depression awareness has been “discouragingly slow” although there have been improvements over the past few decades. “Go back 40 years, it was thought of as a moral weakness,” he says. “Now, 70 percent see it as an illness but not all of the stigma has gone away.”

It’s the lack of understanding around depression that makes it as costly for businesses today, he says. Because people don’t want to admit that they have depression or seek help for fear of being thought of as weak, they quietly let the disease take control and everybody loses.

“When you treat depression, expenses for other medical conditions plummet,” Greden says. “But often people with depression don’t want to call it depression so they go to the doctor for something like back pain or insomnia and continue to miss work.”

Meanwhile, left untreated the condition gets worse and more costly. For instance, while those who suffer depression may not be depressed all the time, without proper treatment their depressive episodes come closer together, become more severe and are harder and more costly to treat, Greden says.

But there are many ways companies can get on board with depression awareness and make sure workers of all ranks—from CEOs to assistants— identify the problem and know where and how to seek treatment if needed.  The good news is that this can be done at a moderate cost with a high return on investment, studies show.

Addressing Stigma
Experts agree that the first step to addressing depression in the workplace is working to lift the social stigma that surrounds the disease.  By openly educating on depression and related disorders, it becomes easier to create a successful program to combat depressive disorders.

“What’s important for employers to remember is depression is one of the most common problems that people deal with. It’s most likely affecting one of their employees at any given time,” says Andrea Wittenborn, a depression expert and associate professor in Michigan State University’s Department of Human Development and Family Studies.

One of the best ways to raise awareness about depression in the workplace may be through in-house campaigns—posters, literature, educational workshops, screenings, etc—that make the issue accessible, adds Wittenborn.

Greden also suggests inviting guest speakers to come and share personal stories about coping with and getting treated for depression. This, he says, creates an open, honest environment. “You get a group of people sitting in (one place), asking honest questions and learning.”

Without any awareness campaign, people don’t feel comfortable talking about depression and related illnesses like bipolar disorder. If discussed at all, it is often done in generalized code, using other terms like “stress,” or “personal problems,” something Greden says is detrimental to the cause of depression awareness.

“It can be difficult for people to even be aware or allow themselves to accept that they are depressed,” adds Wittenborn, noting that depression manifests itself differently in different people. For instance, she says some people might experience irritability and anger or physical pain while others might be overcome with a feeling of anxiety, sadness or hopelessness.

In 2001 when the University of Michigan started the country’s first comprehensive Depression Center, even the name was controversial. “I proposed that it be called a Depression Center and everybody had problems with that,” Greden recalls. “One of the people said, ‘Call it a Wellness Center.’ Right away, that’s the stigma speaking.  A decade later we have a bunch of evidence that people are picking up on this.”

Greden and Wittenborn say it’s important for management to be on board with a plan to eliminate stigma, and to communicate openly that seeking treatment for depression is a sign of strength rather than weakness.

If an employee is showing signs of depressive behavior—isolation, low productivity, irritability or regular absenteeism—the best thing to do is find a way to let that person know they’re not alone. “A small interaction showing genuine concern can help people become aware that something is going on,” Wittenborn says.

One effective method is to create a peer-to-peer support system; building a culture where no one is left behind. In fact, this works so well that the U.S. military uses it as its number one strategy to deal with stigma related to mental health issues. That could mean going with a co-worker to therapy to get help if need be.

When it comes to eradicating stigma, “It takes an education program—just like working on obesity. It’ll work as long as it’s handled like the disease that it is,” Greden says. “I think Robin Williams’ publicist was very open about the reality of the illness and that helps raise awareness.”

The Right Strategy
A major part of effectively addressing depression in the workplace is developing a program or strategy so that once awareness is raised, a clear path to treatment is available.

Since there is no one-size-fits-all approach to treating depression, any program geared toward treatment should be thoroughly informed by clinical research and understandings, says Greden. As with implementing or changing any company policy or program, buy-in from leadership is the first step to making an effective program a reality.

“If I were running a business, I’d want to know if this is going to cost or save me money and studies show it saves money,” Greden says.

One common method companies have found effective is creating an Employee Assistance Program, defined on the website of the Employee Assistance Professionals Association as “a set of professional services specifically designed to improve and/or maintain the productivity and to address a work organization’s particular business needs through the application of specialized knowledge and expertise about human behavior and mental health.”

While approximately 88 percent of Fortune 500 companies offer EAP services to their employees, one study involving companies that offered EAPs showed that only 60 percent of employees knew that their company offered such a program, according to a 2005 report in the Journal of Occupational and Environmental Medicine.

Still, large companies like United Airlines report significant returns from EAPs, nearly $17 for every dollar spent, according to a report from the Society For Human Resource Management.

But Greden says while EAPs can be effective, they too often turn into general wellness programs, weakening their potential to target depression in a more effective manner.  “We’re at a point where if we just call it what it is, we’d be better off,” he says. “I don’t think EAP programs need to be disbanded, they just need to be rebranded so they don’t become something else because of vague labeling,” he says. “Stigma started all this need to call it something different.”

One alternative or supplemental strategy to the standard EAP model, Greden says, is having your company develop a relationship with local hospitals and health care providers to form a network of doctors and therapists ready to get referrals from the company to streamline the treatment process. This is not a costly strategy and it has been proven effective, he says.

After securing a network of health care providers, another effective step companies can take is to reduce employee co-pays, encouraging workers to seek and continue treatment. Greden said many companies lessen insulin co-pays for people with diabetes and the same thing could be done for depression. “Treating depression is like treating diabetes: You can get better but you can’t stop treatment.”

The good news is that while it can be a severe and even deadly disease, depressive disorders are treatable with the right medical attention.

But not all experts agree on the best method to treat depression.

While Greden says it should be a combination of medication and therapy, Wittenborn says most depression, aside from less common severe cases, can be treated with talk therapy and without the possible side effects that come with medication.

One thing they both agree on is that treatment for depression has to be a custom fit, largely because people suffer from it differently. The most important thing for employers to remember is that a supportive work environment for those suffering from depression not only saves money, but it could save lives.

One way to reduce stigma and prioritize treatment plans is to help people realize just how common the disease is.

“Let’s say Michigan is playing Ohio State and it’s a full house [109,900 people],” Greden says. “There are more than 17,000 people in that stadium who have had depression or are dealing with it right now.”