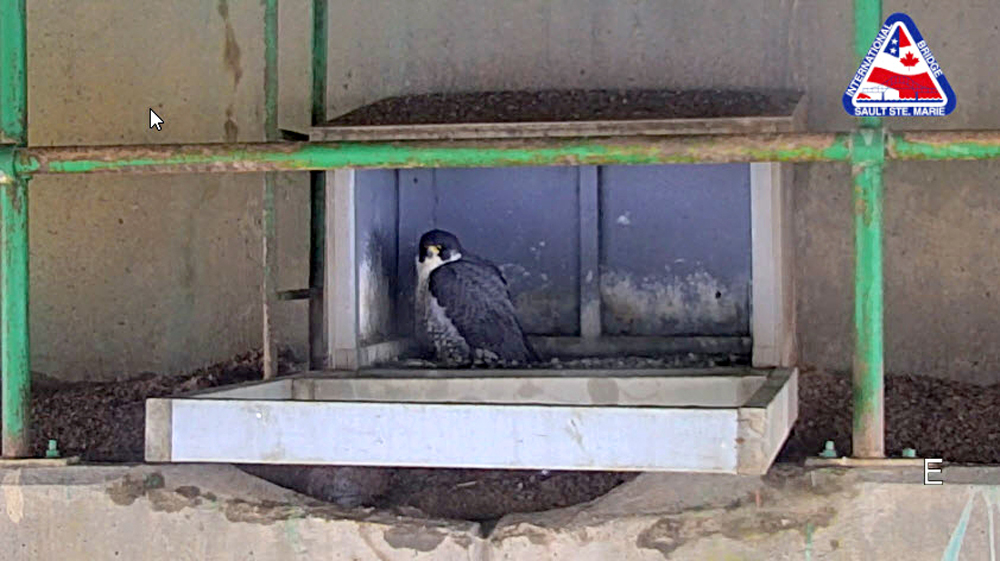 How about this for a water-cooler break: Check out the family growing at the site of the Sault Ste. Marie International Bridge.

It’s not your typical family – it is a pair of peregrine falcons. The duo has returned to the bridge for nearly a decade now, hatching two dozen chicks since 2010, bridge officials say.

Live Video Stream Available
While they may still fine-tune the vantage point and the zoom factor, the IBA now has the live video stream viewable.

The camera is coming online just in time for the seasonal return of the endangered raptors. While working with their partners at Siemens and Lighthouse.net to get the camera online earlier this week, IBA staff saw one of the birds appear onscreen.

“We were surprised that they were here already,” International Bridge Engineer Karl Hansen says in a statement. But he says birds have also appeared at nest boxes on the Portage Lake Lift Bridge between Houghton and Hancock. Webcams have been installed there in cooperation with the Copper Country Audubon Club to allow people to watch potential nesting activity.

24 Chicks and Counting
“This site has hatched 24 falcon chicks since 2010, when we put in the nest box and started counting,” says Hansen. “There were more before that but we don’t know the number.”

Michigan lost its peregrine falcons in the 1960s and 1970s due to the use of DDT and other environmental contaminants. Since conservation efforts started in the mid-1980s, the number of peregrine nests has slowly increased. Now there are about 40 falcon pairs actively trying to nest statewide, with one to two new pairs discovered most years.

The peregrine falcon has been removed from the federal endangered species list, but is listed as an endangered species in Michigan, protected by state and federal law. Peregrines have adapted to city habitats, nesting on tall buildings, smokestacks and bridges around the world.

The operation and maintenance of the International Bridge is totally self-funded, primarily through bridge tolls. It is not subsidized by any state, provincial or federal government entity.