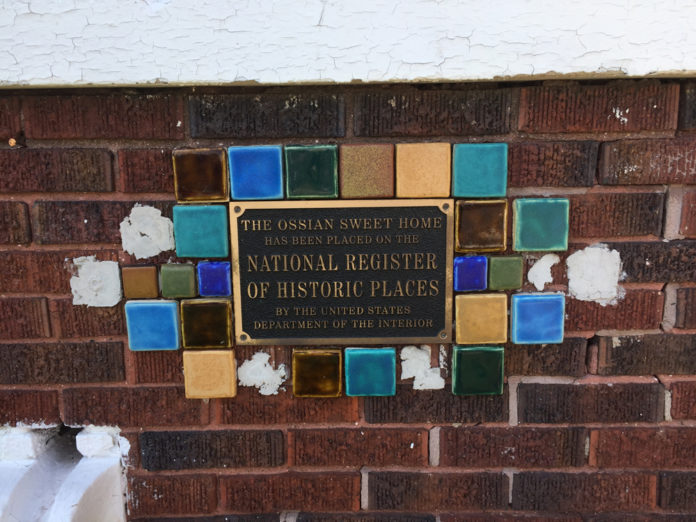 When Dan Baxter heard about Detroit’s Dr. Ossian Sweet and his monumental “trial of the century,” Baxter was a young man living in the very house on the city’s east side where the 1925 shooting that made Dr. Sweet a household name happened.

As Baxter researched Dr. Sweet’s story of how he and his family had to defend their home from a growing crowd that wanted to force the African-American homeowners out of their residence at 2905 Garland Avenue, Baxter told the crowd gathered outside his childhood home Monday morning that he felt shocked and upset.

But the one thing he didn’t feel was fear. That was because Dr. Sweet and his family were Civil Rights pioneers – and their defense of their home and Dr. Sweet’s fear ended with their trial, in which the family was found innocent by an all-white jury of their peers.

“Dr. Sweet was a trailblazer,” said Baxter, who serves today as the city’s Director of Elections. “We stand on his shoulders.”

On Monday, the City of Detroit, through Baxter and Mayor Mike Duggan, announced it has been awarded a $500,000 federal grant to expand the historic district of the Dr. Ossian Sweet home and preserve two more adjacent houses that will preserve the famous site in perpetuity, and memorialize an authentic Detroit civil rights story.

The City of Detroit was awarded the maximum grant amount from the African American Civil Rights program of the Historic Preservation Fund, National Park Service, and Department of the Interior. The effort is among 51 winning projects in 24 states that will preserve sites and highlight stories related to the African American struggle for equality in the 20th century.

Legal history made in Detroit

The grant will pay for the cost of preserving and interpreting a space in the Sweet house that will be open to the public for scheduled visits, and rehabilitating two additional properties across Garland Street, where the violent mob gathered and where the shooting occurred. The City is also in the process of expanding the district to include those properties at 2912 and 2918 Garland to cover the broader anti-integration movement and the events at the Ossian Sweet House as it relates to the Civil Rights Movement. Today, the Sweet home is privately owned, and only 2905 Garland is listed in the National Register of Historic Places.

Mayor Mike Duggan has a personal connection to the Ossian Sweet house. In the early 2000s, when he was Wayne County Prosecutor, he was appalled to learn that the legendary site, while on the state register of historic places, did not have a state historical marker and led a campaign to get the state to place one. The effort was successful and in 2004 he participated in a ceremony to unveil the new marker while the National Black Prosecutors Association was in Detroit for its annual convention.

“As Detroit continues to move forward, we cannot forget where we’ve been,” said Mayor Mike Duggan. “Preserving the Dr. Sweet home and expanding the historic district will give us a chance to reflect on the struggles many African American families have faced and celebrate champions like Dr. Sweet and others, who stood up for what is right.”

A Civil Rights landmark
In 1925, Dr. Ossian Sweet, an African American physician, purchased the house at 2905 Garland Avenue in a segregated white neighborhood on Detroit’s east side. On September 9, a violent mob gathered there to drive the Sweet family out of the neighborhood. Dr. Sweet decided to stand his ground; rocks were thrown; shots were fired in defense and one man in the mob died. Dr. Sweet and others in the home at the time were arrested and charged with murder. The NAACP hired renowned attorney Clarence Darrow to represent Dr. Sweet; the case resulted in acquittal, bringing international attention to U.S. housing discrimination.

The grant, awarded to the city’s Planning and Development Department, will cover a number of improvements and additional work including:

• A study and framework plan to revitalize and expand the historic district. This includes a historic structure report to determine current conditions, location of public access points and expanded historic district boundaries.
• Stabilization, and exterior improvements to the Sweet house at 2905 Garland and rehabilitation of the open-plan first floor to allow for future public visitation.
• Stabilization and exterior improvements to 2918, 2912-14 Garland.
• Historic interpretation, which will involve in-depth research into the Ossian Sweet house and the surrounding neighborhood to produce materials for future public display.