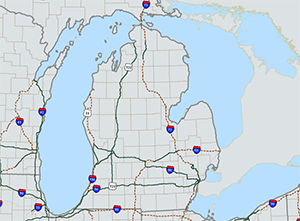 LANSING, Mich. — Gov. Gretchen Whitmer said Tuesday that Michigan has submitted seven nominations for new Alternative Fuel Corridors, which are transportation routes that will build out electric vehicle charging infrastructure using the state’s National Electric Vehicle Infrastructure funds that arrived via the Infrastructure Investment and Jobs Act. These nominations are intended to improve the overall driving experience for Michiganders, while bringing jobs to the state and improving Michigan’s economy.

“Today’s AFC nominations will help Michigan continue leading the future of mobility and electrification by making our roads and bridges more accessible to electric vehicles,” Whitmer said. “The corridors will complement our ongoing efforts to fix our transportation infrastructure, install electric vehicle chargers, and create tens of thousands of good-paying auto jobs. We will keep getting things done to keep Michiganders safe on the road, rebuild our roads and bridges, and grow our economy.”

The AFCs will be implemented by the Michigan Department of Transportation, working closely with the Michigan Infrastructure Office (MIO) established by Governor Whitmer this past January. The governor established MIO to ensure resources sent to Michigan under the IIJA, also known as the Bipartisan Infrastructure Plan, are used effectively and efficiently to repair roads and bridges, replace lead pipes, expand high-speed internet and build up electric vehicle charging infrastructure.

These seven nominees were chosen with a focus that centered on the support of EV adoption and the elimination of range anxiety, as well as the role Michigan currently holds as part of a national and regional EV network. Other factors taken into account included the economic development and job creation these would bring, as well as efforts to decarbonize Michigan’s economy.

The seven nominations are:

“We are excited to do our part to make Michigan’s roads more EV-friendly as a higher adoption of electric vehicles becomes more and more prevalent,” said Chief Infrastructure Officer & Director of the Michigan Infrastructure Office Zachary Kolodin. “This is an essential part of our future, and these nominations that have been submitted for the new AFCs are just another step we’re taking to make sure Michigan remains at the forefront of the mobility industry.”

“MDOT is eager for this next step of not only fixing the roads but also making them more accessible to the growing electric vehicle market,” said State Transportation Director Paul C. Ajegba. “MDOT fully supports the governor’s continued push to make Michigan the leader in electric and connected mobility. Not only will this expand and improve Michigan’s economy, but it will also improve safety, which is always our top concern.”

Michigan has submitted corridors through the Alternative Fuel Corridor process five of the past six years and has already successfully designated portions of I-94, I-96, I-69, I-75 and US-131.  These designations included segments that were either “pending” — meaning there was potential for more fueling/charging infrastructure — or “ready,” meaning the minimum number of services required were already present along the corridor. There are also designations along these corridors for LPG and other non-traditional fuels.

The map of current AFC routes can be seen here.

All of the already existing and newly designated AFCs will support Michigan’s involvement in the Regional Electric Vehicle – Midwest (REV-Midwest) compact. The REV-Midwest states are working together to develop a multistate network of EV charging that will support EV adoption and fleet electrification, futureproof interstate and international commerce and travel and ensure we maximize the efficiency and benefits for both the EV infrastructure resources and our shared electrical grids.