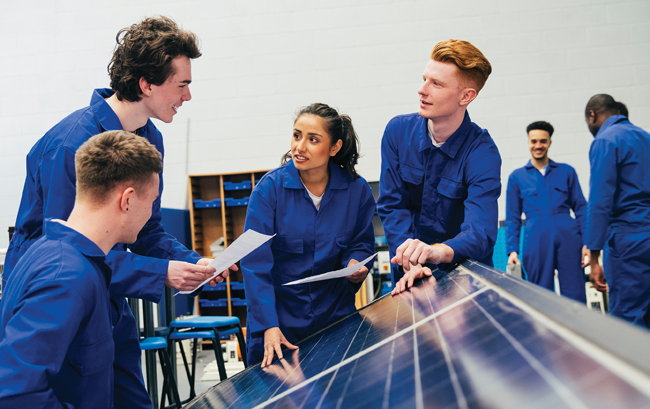 It’s certainly good news overall that Michigan’s unemployment rate is only 4 percent —slightly higher than the national 3.9 percent rate. However, these numbers make it difficult for employers to attract and retain staff members.

In the automotive sector, the situation is particularly challenging. The auto industry now encompasses advanced technology with features that go far beyond traditional vehicular transportation. Consumers want information and entertainment, including internet, cell phone and DVD capabilities in their cars. Newer vehicles incorporate such safety and convenience features as rear and side view cameras, parking assist and navigational devices.

Then there is the extensive research and development underway to create autonomous vehicles that could enable drivers to “take a back seat” with computer-controlled driving. With all of these recent and developing advances, experts say that automotive manufacturers and suppliers need a different range of skills than in the past.

“There is a lot more demand than supply for computer and electrical engineers who can work with embedded systems and big data,” he notes. “We still need mechanical engineers but automotive engineers can be very narrow. They need cross-knowledge and a strong science background.” However, the competition level for these individuals is increased by non-automotive employers that are also seeking individuals with the software, electrical engineering and data analysis skills.

Finding talent and keeping them here
Fortunately, Michigan has 15 colleges and universities that offer bachelor’s, master’s and doctoral engineering programs, including specialties related to the automotive industry. Wayne State University’s College of Engineering recruits about 95 percent of its undergraduates from Michigan and most remain in the state after graduation, says Farshad Fotouhi, the school’s dean. “Some may move to Silicon Valley but it’s because they worked for Ford Motor Company here and Ford transferred them to their facilities in California.”

Wayne State’s engineering programs benefit from proximity to automotive leadership in metropolitan Detroit and Fotouhi is grateful that local automotive professionals are willing to teach part-time at the school he heads. In addition, an Industry Advisory Board helps faculty develop new curricula, such as the program in cyber-physical systems, to make sure that they match industry needs.

Fotouhi agrees that the automotive sector’s talent needs have changed, with the industry seeking “new talents — not traditional mechanical engineers but individuals familiar with connectivity, mobility and megatronics.”

Down the road, at the University of Michigan’s College of Engineering, which draws many students from outside the state, just a third of those who earned a bachelor’s degree in 2017 and 35 percent of master’s graduates remained in Michigan. Five of the top 10 hiring companies for UM graduates specialized in technology or focused on social media, among them Facebook and Google, both of which are based on the West Coast.

The outward migration from the state is not limited to engineering graduates, notes Erica Quealy, director of communications for the State of Michigan’s Department of Talent and Economic Development, who says some 36 percent of all graduates leave Michigan.

Quealy says that while half of the state’s graduates initially look for jobs here, they end up being drawn to higher paychecks available outside the state or simply prefer to live in bigger cities such as Washington D.C., San Francisco, Chicago and New York.

“They don’t see us as a technology state even though we are a global leader in mobility and automotive vehicles,” said Quealy. Taking action to dispel that misconception, her employer began a digital advertising campaign in 2018 to promote Michigan as a place to work and live, targeting STEM graduates in Pittsburgh, Madison and Chicago to educate them about opportunities in Michigan.

At OpTech, Fakhoury says the firm has lost job candidates to Apple, Amazon and Boeing. “The East and West coasts are
grabbing a lot of our graduates.” And while Michigan salaries may be well below what they are on the East and West Coasts, he points to “more excitement here. There is a different feel in the Midwest.”

Referring to Tier 1 automotive suppliers, Fakhoury says, “If we’re going to be competitive, we’re going to have to up our game.” He also points to a reluctance by some companies to hire foreign-born engineers, which he attributes in some cases to concerns around visa requirements or a misconception that hiring someone from another country would take a job away from someone currently living in the U.S.

Fakhoury is quick to point out that he would hire someone here, but can’t typically find available candidates.

Meeting the challenge in West Michigan
The Right Place, an economic development organization based in Grand Rapids, seeks to expand existing businesses and attract new ones to its 13-county region. Availability of a strong workforce is one part of the business location decision.

There are challenges in filling employers’ needs for automotive engineers, says Cindy Brown, vice president, talent initiatives for The Right Place, who points out that West Michigan companies are competing for talent mainly with other Michigan firms and companies in nearby states. “A Californian is not likely to want to come here. Competition is mainly in the Midwest due to the weather.”

She cites a number of lifestyle qualities that are strengths of West Michigan. “Companies are selling not only themselves. Employees want to know what you are doing after five and on weekends,” she says.

“You can live where you want — city or suburbs. Grand Rapids is the second largest city in Michigan. Commute times are lower. There are walkable downtowns. The beer scene is huge and the food scene is expanding. The Grand River goes right through the city and is used for entertainment purposes,” Brown notes.

Another advantage of the state’s west side is the ease of getting involved in the community. “Millennials want to get involved and you’re not a number here,” she says.

The Right Place works with its strategic partner, Hello West Michigan, a membership organization which includes some automotive-related companies and has multiple programs to recruit and retain “knowledge workers.”

A key program targets individuals with some connection to Michigan who are the best prospects for job recruitment. According to Rachel Bartels, Hello West Michigan’s executive director, the organization seeks to “connect, plant a seed and give them assistance.” She says that “education, attraction and connections” are essential for recruitment. The first step is an outbound digital marketing campaign targeted to individuals who went to college in the state, have family members here or who have travelled here.

“The campaign is served to people with Michigan connections and includes people talking positively about Michigan,” says Bartels. Hello West Michigan’s website is a featured element of the promotion, offering extensive resources for individuals considering relocation.

Antoher key feature is the ability to upload a resume at no charge. Hello West Michigan’s candidate concierge then has a half-hour
conversation with the prospect to find out what kind of job the individual is seeking. After that the resume is sent out to industry-appropriate Hello West Michigan members in a weekly group mailing that includes 500 human resources professionals. Their staff follows up with candidates afterward.

“Since 2013, Hello Michigan has sent out 2,400 resumes and 1,400 individuals have been hired,” says Bartels. The organization also holds a “Rethink West Michigan” event for former residents of the area who return for Thanksgiving. This is a very popular networking opportunity that takes place on Thanksgiving eve to encourage people to consider relocating in West Michigan. She says that other areas have since copied the idea.

Bartels cites professional and lifestyle features as regional strengths. “This is not a one-horse town economy. There are multiple companies within the same industry, which is important if people want to move in the future. It’s not one and done.”

In the lifestyle category, Bartels points out the presence of family, arts and culture, outdoor recreation, and restaurants and night life in Grand Rapids and surrounding areas. The cost of living, including housing, is low compared to bigger cities. Salaries are lower than on the East or West Coasts, but lower living costs offset this differential. “People don’t realize that they can make it here on less.” However, she says that Grand Rapids housing costs are now comparable to other areas in Michigan.

Hello West Michigan also helps member companies with internship programs, which can be a useful pipeline for recruits. OpTech’s Fakhoury also recommends such programs to automotive-related clients as a recruitment tool.

Looking ahead
While expanding engineering degree programs could enlarge the pool of applicants in the state, Wayne State’s Fohouti says the College of Engineering could increase its graduates by 10 percent, but this would require more resources because engineering education is costly, with expensive labs, instruments and up-to-date equipment.

Looking ahead, the state’s Erica Quealy says more talent will be needed as baby boomers retire and the skills of existing engineers become outdated. Michigan’s leadership in mobility and autonomous vehicles will open up “vast opportunities,” she says. The challenge will be enticing more qualified engineers to take advantage of them.