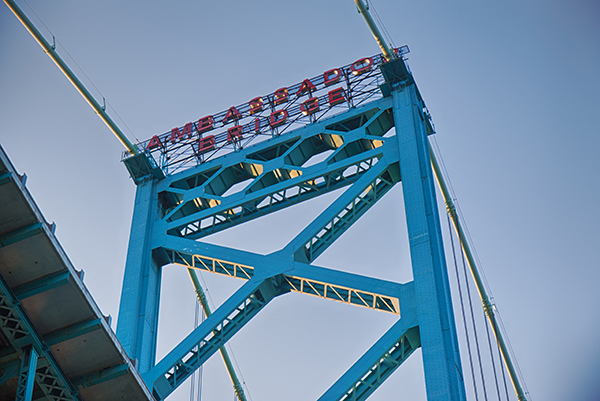 It’s happening on the Canadian side of the Ambassador Bridge, but John Walsh knows the blockade by Canadian truckers upset with vaccine mandates in their country is having a negative effect on this side.

Walsh, president and CEO of the Michigan Manufacturers Association, said he’s monitoring the situation because “a continued slowdown or blockage of commerce could have a dramatic impact on manufacturing in Michigan.”

“The worldwide supply chain is still recovering from the effects of the pandemic and a workforce shortage, which creates greater concern among our members when it comes to the Ambassador Bridge,” Walsh said. “A day or two is costly and troubling.  A longer delay could cause temporary work stoppages in the absence of parts necessary to continue the manufacturing process.”

A large portion of goods traded between the U.S. and Canada cross the bridge, particularly affecting Detroit-based automakers and the companies who supply them.

“Our hope is that the truckers and the Canadian government can resolve their issues quickly and/or that further demonstrations take place in a manner that does not adversely impact the movement of people and product between Canada and the U.S.,” Walsh said.

On Thursday, Michigan Gov. Gretchen Whitmer called on Canada to resolve the conflict.

“My message is simple: reopen traffic on the bridge,” Whitmer said in a statement. “In Michigan, our economy continues to grow because of our hardworking people and innovative small businesses. Now, that momentum is at risk. Commercial traffic is at a standstill at the Ambassador Bridge and heavily backed up at the Blue Water Bridge.

“The blockade is having a significant impact on Michigan’s working families who are just trying to do their jobs,” she added. “Our communities and automotive, manufacturing, and agriculture businesses are feeling the effects. It’s hitting paychecks and production lines. That is unacceptable.  The Ambassador Bridge is the busiest land border crossing in North America, used by tens of thousands of commuters and truck drivers carrying hundreds of millions of dollars of goods every day. Countless Michiganders rely on this daily flow of goods and people to get things done.”

The dispute has drawn the attention of the White House. Press Secretary Jen Psaki said on Wednesday that President Biden is “focused” on the issue and the administration is “working very closely with” Homeland Security and the Canadian government to reroute commerce to “alleviate the situation.”

According to The Detroit News, Windsor Mayor Drew Dilkens said a solution is difficult to negotiate because of the “grassroots nature” of the protest.

“Everyone understands what is at stake when this border crossing is closed,” Dilkens said during a Wednesday afternoon news conference, according to The News. “Almost a full third of international trade between the U.S. and Canada crosses at the Ambassador Bridge. If it’s closed for an hour, it’s noticed by the auto sector immediately, greenhouse sector, and many others. If it’s closed for days, people start demanding action. We hear you. We’re not going to let this happen for a prolonged period of time.”

The situation is having a negative effect on the production of U.S. automakers:

While the bridge is a mainstay of supply for automakers and their suppliers, the blockades haven’t yet become serious, according to Bernard Swiecki, director of research at the Center for Automotive Research in Michigan.

“Essentially when you look at parts that are coming into a plant, some of them have a lead time of weeks, some an hour and half to two hours,” Swiecki told CNN. Items that are crossing the border are likely to have slightly more lead times and more of a buffer due to parts on hand. Even so, Swiecki said, “you need all of those things to build a vehicle.”

If this protest ends soon, automakers should be able to resume normal operations quickly.

“The longer this goes on, the more the built in buffers of given components run out, the more plants will start going down,” Swiecki said.

Traffic into Canada from the U.S. was still blocked Wednesday, although the bridge reopened to some U.S.-bound traffic early Tuesday morning and fully opened Tuesday afternoon with occasional restrictions on Wednesday.Canadian officials showed no signs of lifting the mandate on Wedneasday. Prime Minister Justin Trudeau told the Canadian Parliament he was “following the science.” “We intend to follow the science and are working closely with (Canadian chief public health officer) Dr. (Theresa) Tam and other public health officials to ensure we get through this pandemic as best we can,” Trudeau told parliament, according to The News.