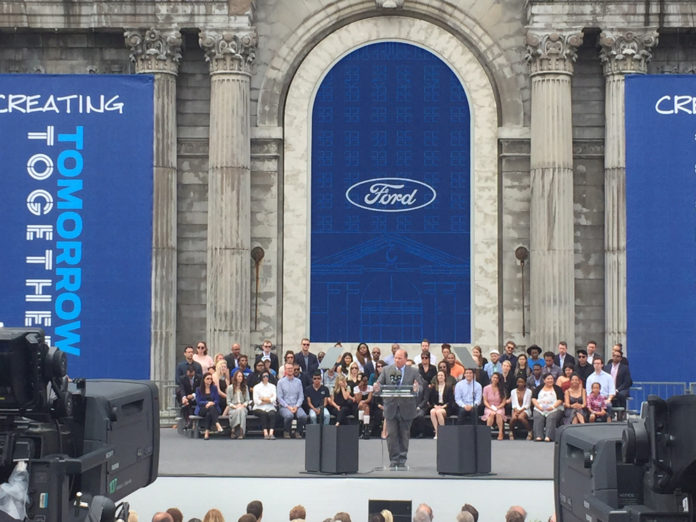 Ford Motor Company with a massive, inclusive celebration of its acquisition of Michigan Central Station gave Detroit and the Southeast Michigan region a real reason to celebrate – its commitment to the city, Dearborn, autonomous technology and a globally viable workforce will grow stronger as the years ago by, company officials said.

The Tuesday morning event was impressive – it included performances by Big Sean and comments from Detroit Mayor Mike Duggan, Wayne County Executive Warren Evans, and Ford execs Bill Ford and Jim Hackett. It even featured a special performance by the U.S. Poet Laureate Tracy K. Smith. There was music. There was singing. There was cheering, tears and lots of social media. In other words, Ford made its mark on the Corktown landscape with this purchase, picking up the blighted station from the Moroun family in late 2017. The automotive company has had six months to prepare for this day, and that was clear from the images, the videos, the speeches and the preview of a History channel documentary on Detroit (which will air July 1, according to officials).

The primary message from the day was this: Ford isn’t going anywhere. It will have Dearborn and Detroit. It will take its place among the greatest of car companies, some 115 years after Henry Ford founded the company. It will continue its commitment to technology, autonomous vehicles and sustainability, all things that Bill Ford feels strongly about and continues to preach. But, this time, its commitment to reviving itself and a city are that much more visible.

Bill Ford’s excitement about the announcement and the crowd’s reaction since Ford confirmed its train-station purchase has been significant. And, if Tuesday’s event is any indication, the investment in the city will pay off in a variety of ways. There will be a large Ford campus in Corktown. There will be big investments in Detroit’s ongoing revival. And there will be a place for everyone in the plan going forward, especially what Hackett called “makers, creators and entrepreneurs.”

As a company, Ford did seem slightly overwhelmed by the number of people who came out to the event, running out of parking places, media passes and room for people to explore the train station itself. But having such a high-capacity event gives the company an idea of the impact it is having with this purchase and what can be accomplished in the months and years to come.

Ford is opening Michigan Central Station to the public Friday, Saturday and Sunday for tours. If you can make it, it is worth every moment of time it takes to get into the building. Built in 1913, Michigan Central is a beautiful structure inside and out, even with its decay. Seeing it now in its vulnerable state will only make its renewal that much more impressive.

The bottom line is this: Detroit has hit a tipping point with this purchase, and the whole region will benefit from it.