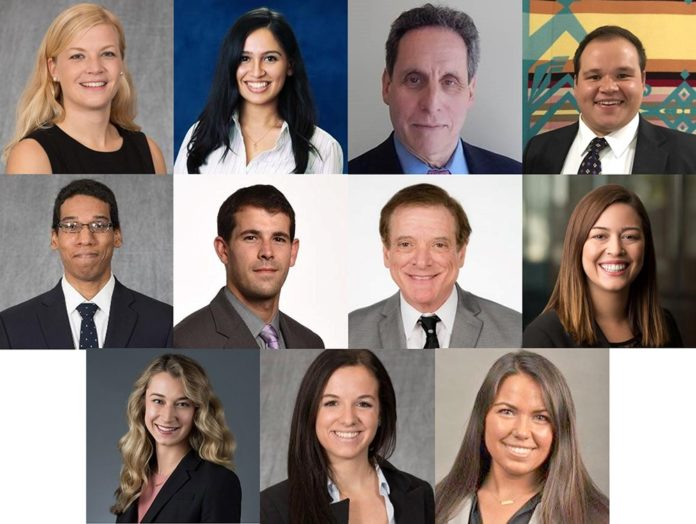 Miller Canfield is pleased to announce that nine associate attorneys have joined the firm in six of the firm’s key practice groups: Corporate and Transactions, Employment and Labor, Energy and Environmental, Financial Institutions, Litigation and Dispute Resolution, and Real Estate. Miller Canfield’s new associates are:

Joanna Dreaver, Litigation and Dispute Resolution Group, Troy, Michigan. She comes to the firm after working as a contract attorney at Perdue Law Group in Grand Rapids, Michigan. In 2015, Dreaver was a summer intern for U.S. Court of Appeals for the Sixth Circuit Judge Helene White. She is a graduate of the University of Michigan Law School and earned her Bachelor of Arts in philosophy from the University of Michigan.

Michael Fisher, Energy and Environmental Group, Lansing, Michigan. He is a graduate of Georgetown University Law Center and he earned his Master of Public Administration from Central Michigan University and his Bachelor of Science in environmental biology from Ferris State University. He was a legal extern at the U.S. Environmental Protection Agency Environmental Appeals Board in Washington, D.C. Fisher was a law clerk for the U.S. Department of Justice Environment and Natural Resources Division and interned at the U.S. Department of the Interior. Before law school, Fisher worked for the Saginaw Chippewa Indian Tribe of Michigan, where he was an environmental response program specialist and a water resources technician.

Kareem Gibson, Financial Institutions Group, Detroit. He is a graduate of Wayne State University Law School and the University of London, where he earned a Graduate Diploma of Law. He earned his Bachelor of Science in business administration from the University of South Carolina. While studying in London, Gibson was a student advisor at the Start-Ed Legal Clinic, where he helped clients with contractual and other business issues.

Dominique Giordano Gonzales, Real Estate Group, Chicago. She comes to Miller Canfield from Cook County Circuit Court, where she was a clerk for Judge Celia G. Gamrath. Prior to her clerkship, she worked as a corporate counsel extern for Whirlpool Corp. in Benton Harbor, Michigan. She is a graduate of the University of Notre Dame Law School and earned her Bachelor of Arts, with double majors in political science and Spanish, from Villanova University.

Arthur Griem, Corporate and Transactions Group, Ann Arbor, Michigan. He is a graduate of Wayne State University Law School and earned his Bachelor of Science in leadership and management studies from New York University. Griem worked as a legal extern for TI Automotive in Auburn Hills. While at NYU, he was a captain of the university’s ice hockey team, which won the ACHA Division II national championship in 2015.

Vera Hansen, Corporate and Transactions Group, Detroit. She is a graduate of Wayne State University Law School and earned her Bachelor of Arts in political science and law at the University of Tübingen in Tübingen, Germany. She was a legal intern at Lear Corp. in Southfield ad at Tata Motors in Pune, India.

Alyssa Hussein, Litigation and Dispute Resolution Group, Detroit. She is a graduate of University of Detroit Mercy Law School and the University of Windsor Faculty of Law and earned her Bachelor of Arts in women and gender studies, political science and history from the University of Toronto.

Erica Jilek, Employment and Labor Group, Detroit. She is a graduate of Wayne State University Law School and earned her Bachelor of Science in political science from Central Michigan University.

Barbara Moore, Employment and Labor Group, Kalamazoo, Michigan. Moore comes to Miller Canfield from Varnum in Grand Rapids, where she was an associate in the firm’s employment and labor practice. Before joining Varnum in 2018, she was a legal intern at the United Community Housing Coalition in Detroit. She is a graduate of the University of Michigan Law School and earned a Bachelor of Arts in political science from Michigan State University.

In addition to the nine new associates, the firm announced that senior counsel attorneys Howard Weissman has joined the firm’s Corporate and Transactions Group in Washington, D.C., and L. Steven Platt joined the Employment and Labor Group in Chicago.

Platt was previously a partner at the Chicago firm of Robbins, Salomon & Patt, where he headed the labor and employment practice, with a special focus on employment litigation and class action wage and hour litigation. He has decades of experience that will certainly bolster our powerhouse Employment and Labor Group.

Weissman comes to Miller Canfield from Baker & McKenzie, where he was part of the firm’s compliance and investigations practice since 2014. He had previously served as vice president and associate general counsel at Lockheed Martin Corp.