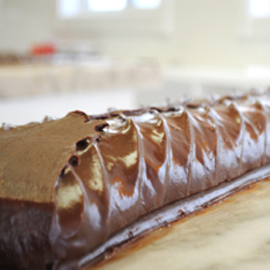 Honoring the past while creating a vibrant future - that is the philosophy Bob Benser Jr. has when he looks at his family’s current properties as well as future developments on one of Michigan’s brightest gems, Mackinac Island.

Benser is co-owner of the island’s first fudge shop, Murdick’s Fudge. Much like the Grand Hotel’s Dan Musser III, Benser grew up on the island and has invested heavily in its potential. The enthusiastic entrepreneur believes in making the resort area as clean, smart-looking and sophisticated as possible while maintaining the traditions that bring thousands of families to Mackinac every season.

But someone also has to dream big to keep the island moving forward. That is where the Benser family comes in. Led by patriarch Bob Benser Sr., the well-known clan is looking forward to a proposed project between their family and the Frank Nephew family that could retain multiple retailers and bring many more overnight visitors to the downtown area, Benser Jr. said.

The Benser and Nephew families are asking the island powers-that-be to approve a plan that would expand the Lilac Tree Hotel, adding a 60-seat movie theater and a 720-square-foot rooftop deck to the main street. This expansion plan is somewhat controversial on the island. While many business owners say off the record that they would support the plan, local officials are concerned with whether these new structures will fit into the downtown’s historic charm.

Benser, himself a bit of a perfectionist, understands these worries. He says he is committed much like they are to keeping Mackinac Island the classic family vacation spot it always has been. That is why the plans he created maintain the historical character of the facades, even using the same type of stone that is present in other family-owned properties, such as the Chippewa Hotel and the Pink Pony bar and restaurant.

The Bensers’ famous fudge shop started as Murdick’s Candy Kitchen. The first storefront opened in 1887, the same time as the island’s most recognizable landmark, the Grand Hotel, was being constructed. Here is where the first marble tables were used to create the fudge in front of a crowd. The shop also was among the first to install overhead ceiling fans to blow the fudge’s tempting smell into the downtown.

“There’s an art to it. The recipe is a formula, but knowing how to make it is a science. The conditions change every day depending on the temperature and the weather conditions. To make it right takes work and dedication,” Benser said.

Benser’s father started working at the shop shortly after he arrived on the Island in 1955. When the family that originally owned Murdick’s (the namesakes) needed help, he often lent a hand. Jerome and Grace Murdick sold the business to him in 1969 after he spent years leasing and operating it.

Today, the Benser family has three stores on Mackinac, one in Mackinac City and one in St. Ignace, as well as three on Martha’s Vineyard. Benser also owns Island Slice Pizzeria and interests in other area properties.