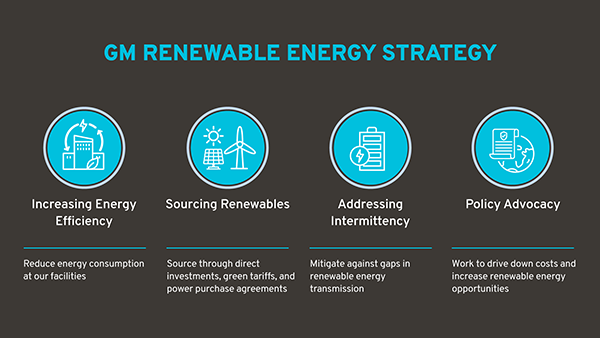 By achieving this accelerated goal, GM expects to avoid the production of an estimated 1 million metric tons of carbon emissions that would have been produced between 2025 and 2030, equal to the emissions produced by burning 1 billion pounds of coal.

“We believe it is critical — to ourselves, to our customers and to the future of the planet — to step up our efforts and reach ambitious targets that move us closer to a more sustainable world,” says Kristen Siemen, GM chief sustainability officer. “Securing the renewable energy we need to achieve our goal demonstrates tangible progress in reducing our emissions in all aspects of our business, ultimately moving us closer to our vision of a future with zero emissions.”

GM’s renewable energy portfolio now includes sourcing agreements from 16 renewable energy plants across 10 states, continuing to lead all automotive OEMs as the largest offtaker of renewable power in the industry. Since 2017, the portfolio has also produced over $75 million of positive cash flows.

In 2019, GM became a founding member of what is now known as the Clean Energy Buyers Association — the largest group of corporate renewable energy buyers in the U.S. CEBA brings companies together to unlock market access, helping organizations of all sizes find cost-effective pathways to buying renewable energy.

“General Motors has been a trailblazer in corporate clean energy procurement for manufacturing facilities for over a decade,” said Miranda Ballentine, CEO of the Clean Energy Buyers Association. “Today’s announcement of securing the energy needed to achieve their 2025 goal is another example of their leadership. But even more impressive has been GM’s commitment to sharing their learnings and guiding other corporations who want to follow their lead. In a world of high competition, this community-orientation is truly wonderful.”

In 2021, GM announced its Science Based Targets for emissions reduction, as well as plans to become carbon neutral in its global products and operations by 2040. In addition, the company plans to eliminate tailpipe emissions from new U.S. light-duty vehicles by 2035. GM has committed to invest $35 billion in electric and autonomous vehicles through 2025, with plans to reach more than 1 million units of annual EV capacity in each of North America and China by the end of 2025.