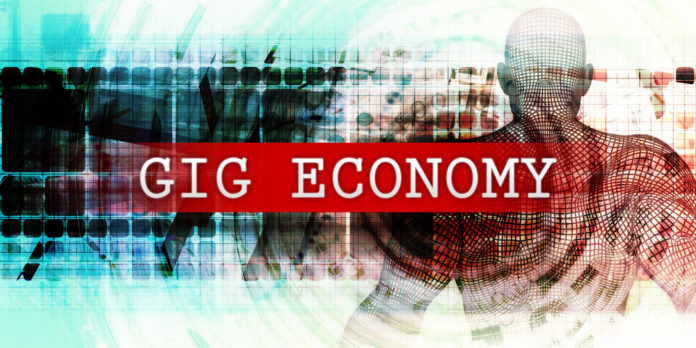 The coronavirus pandemic has put millions out of work and launched what may ultimately be considered an economic depression. It makes sense, then, that the gig economy is growing in response.

How is the pandemic affecting gig workers? Eric Nalbone is the head of marketing for Drum Technologies Inc., a new platform launched during the pandemic that connects small/local businesses with gig workers, who share deals and offers with friends and family to drum up business. It is booming as a solution to help fill a gap.

Nalbone said Drum was established by a group of people who have a deep background providing SMB solutions (financial and technical) and “we think that tackling scalable customer acquisition is the next frontier.” The company started in Atlanta and now operates nationally.

Nalbone previously led marketing for Bellhops, a tech-enabled moving company headquartered in Chattanooga, Tenn., and held a variety of roles with Kabbage, eBay and General Electric. He recently spoke to Corp! magazine about the gig economy, how to get a job in this economic slowdown and the pandemic in general.

Corp!: For someone who is new to the gig economy, how do you define it?

Nalbone: Gig work is a term that generally refers to part-time, on-demand work available to individuals that lets them leverage skills, assets, and talents to earn money on an as-needed basis. It’s been around for quite a long time in various forms and fashions and isn’t dissimilar from freelance work or contracting (in fact, gig workers are legally classified by companies as independent contractors).

Corp!: Why is gigging or having a job in the gig economy a smart move right now?

Nalbone: Many Americans had realized that the gig economy offered opportunities even before the pandemic conditions of 2020 changed the full-time employment status for millions of Americans, but I think now more than ever we’ve realized as a nation and as a world that it’s important to diversify your income sources, and it’s a great opportunity to do interesting, meaningful work that aligns with your interests and talents.

Corp!: Why did the gig economy become so important during coronavirus?

Nalbone: We saw stable employment disrupted for tens of millions of Americans this year, along with a sudden, drastic reshaping of the economy. Many of the things that gig economy companies were positioned to do (deliver goods, shop for groceries, etc.) went from being viewed as a luxury to being viewed as a necessity – on both sides of the equation. It was just as important that grocery stores find safe ways of limiting traffic flow as it was for people to shop. It was just as important for restaurants to find ways to adapt to closed dining rooms as it was necessary for those who couldn’t leave their home to be able to order dinner. And on the Drum side of the world, previously stable and thriving businesses suddenly needed help now more than ever, while it was vitally important for communities around the country to support businesses they know and love.

Corp!: How can the average person take advantage of the gig economy?

Nalbone: The answer here is really about looking at what you have available. We feel like promoting offers is something that anyone can do with Drum. Beyond that, do you have a car that you could use to grocery shop or drive for ridesharing, shopping or delivery? An internet connection you could use to freelance or participate in online research programs? There are lots of ways to get involved and generally something that will fit many different lifestyles, whether you’re looking to generate a little bit of spending cash or replace a significant stream of income.

Nalbone: We’re very optimistic about the gig economy. There will be speed bumps, of course, and we’re seeing that figuring out how we’ll all operate equitably in a way that benefits both the users of gig platforms and the companies that operate them is something that we’ll need to continue working on (California’s conflict with Uber and Lyft is a great example), but it’s such a transformative way of thinking about work that it certainly will continue to grow. There’s no reason that we should earn money doing one and only one thing (i.e. your full time job). Instead, we can add value to the world and generate income in so many smaller, bite-sized ways. Gig platforms really unlock that — giving people choice, flexibility and independence is ultimately a great thing for the workforce.

Corp!: Why should gig economy workers focus on marketing and promotion?

Nalbone: At Drum, we believe there’s a better way to bring customers and businesses together in a person-to-person referral network. Businesses have long understood the value of word of mouth marketing, but struggled to convince their customers to promote their business, because there was no scalable way to understand how much of that activity was happening, reward the best performers, or test and try what works. Despite all those challenges, one of the things all of us do is talk about businesses we encounter — we share news about great restaurants, contractors, retailers and more almost compulsively, because it’s how we make decisions about where to shop, spend, eat, vacation, etc.

The best earning opportunities are ones where you already have the skills and knowledge necessary to hit the ground running, and marketing and promotion is something that we’re all inherently pretty good at (whether you know it or not). Further, we’ve got a built-in network of people we already talk to. It’s a great intersection of business need, personal skill, and personal assets that almost anyone can participate in.

Corp!: What else do you want people to know?