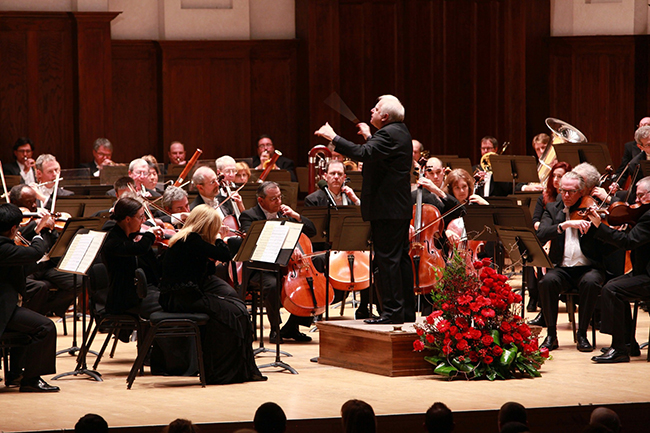 The news was shared at the annual meeting of the Governing Members of the orchestra, held at Orchestra Hall and attended by the Board of Directors, trustees, supporters, musicians, and staff.

Rönmark was selected following an extensive, nearly year-long search process, during which the search committee—led by Davidoff and Director Emeritus Chacona Baugh and comprising board, musicians, and staff—reviewed more than 180 candidates before narrowing down to a final list of nine.

Rönmark’s role in guiding and leading the current trajectory of the DSO, familiarity with the Detroit community, commitment to the progressive growth of the orchestral music field, and dynamic relationship with Music Director Jader Bignamini set him apart in the search.

“I am honored to be named the next President and CEO of the Detroit Symphony,” Rönmark said. “Growing up in Sweden listening to DSO recordings with Paul Paray, Antal Dorati, and my countryman, Sixten Ehrling, I never could have imagined that one day I’d be leading this great orchestra and working with so many talented colleagues. I want to thank Mark, Chacona, and the entire search committee for this opportunity and their support. I am grateful to Anne for her mentorship and to follow her as President and CEO. She has built an exceptional future for the DSO, instilling a highly collaborative culture that has put the DSO on a path towards consistent artistic excellence, innovation, and fiscal stability. I look forward to building upon that work in my new role.”

Current DSO President and CEO Anne Parsons will serve in the position until March 7. Parsons will remain with the organization through November 2022 as President Emeritus to ensure a seamless transition that sets the orchestra up for continued success.

Parsons was named President Emeritus in perpetuity by a unanimous resolution of the DSO Board of Directors at its Nov. 18 meeting in recognition of the transformational impact Parsons has had on both the DSO as an institution and on the community served by the DSO.

As General Manager for the past eight years and Vice President for the past five, Rönmark has been a key contributor to the current culture developed under Parsons’ leadership that has enabled the DSO to achieve new success.

His unique abilities were most publicly on display as he led the Music Director search that culminated in the appointment of Jader Bignamini, a vibrant and youthful artistic leader destined to reshape what is possible for orchestral music in the City of Detroit.

Rönmark has also been a central player in some of the DSO’s biggest innovations of the past decade, including serving on the task force that led to the DSO’s pioneering, free Live from Orchestra Hall webcasts. He subsequently oversaw the development and expansion of the DSO’s livestreaming capabilities so that the orchestra was uniquely positioned at the beginning of the COVID-19 pandemic to keep the music playing with DSO Digital Concerts in a largely virtual 2020-2021 season.

Rönmark’s programming has yielded an increasingly diverse repertoire mix on stage, while off stage he has helped lead the development of the DSO’s comprehensive diversity, equity, and inclusion strategy—critical work that is currently ongoing.

Rönmark was integral to the development of the vision for the DSO Impact Campaign and will take up the responsibility of expanding and growing the endowment as the organization’s President and CEO.

“Erik has been a key contributor to the path the DSO has walked in the past decade, leading the orchestra alongside Anne through a period of unprecedented growth, challenge, and evolution,” said Davidoff. “He was the unanimous choice of the search committee and was approved unanimously by the Board of Directors as the DSO’s next President and CEO. His appointment ensures the whole organization will continue to rise to meet new challenges and goals at a vital time in the DSO’s history.”

Jader Bignamini, DSO Music Director, highlighted the commitment he shares with Rönmark to lead the organization to new artistic heights.

“I am so happy to congratulate Erik on his appointment and look forward to continuing our work to make the DSO the best it can be on and off the stage,” said Bignamini. “The leadership, collaboration, excitement, and creativity Erik brings to the orchestra makes every day a joy. His innovative and thoughtful programming ideas make this a once-in-a-lifetime partnership for me, our musicians, and the organization!”

Anne Parsons, DSO President and CEO, highlighted the cherished, decade-plus partnership she’s had with Rönmark in bringing the DSO’s mission and values to life.

“I’m thrilled with the board’s selection of Erik to succeed me,” said Parsons. “Throughout my tenure I have had the joy of watching Erik grow and excel. He embodies our values of excellence, collaboration, diversity, innovation, and resilience and is the perfect choice to lead our DSO into its next exciting era.”