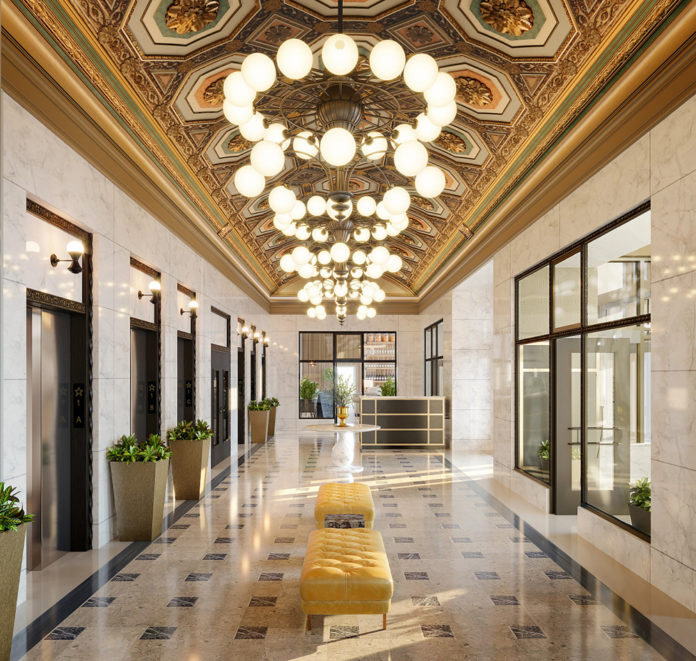 With its newly remodeled The Press/321 building, Detroit real-estate company Bedrock can offer potential residents not only one of the best views in town, but the opportunity to try out a rare rooftop pool, an autonomous-garage parking experience and a lifestyle that any reporter could appreciate.

The Press/321 is the former Detroit Free Press headquarters, and it has over the past two years been renovated to become a 105-unit residential building with four retail spaces and a lux garage that self-parks for residents and tenants, Bedrock officials said Wednesday during a media tour of the newly opened building.

The building, which is located at 321 W. Lafayette in downtown Detroit, opened in 1925, as one of noted architect Albert Kahn’s designs. It served as one of the most stunning newsrooms in Detroit as well as the rest of Michigan, arguably. On Wednesday, one of the tours was taken over, in fact, by former Free Press reporters who took advantage of the outing to check out their former digs.

Bedrock Interior Designer Jaimee Pachala led the tour, showing off one-bedroom and three-bedroom apartments, the gym, the meeting room/study as well as the autonomous parking area. Leasing on the residential portion has begun, Pachala said, and the retail spaces are still looking for tenants on the first floor off of the lobby.

The building’s other amenities include fiber internet, additional tenant storage, bike storage, expansive windows, skylights, archways and high ceiling in the nearly century-old façade. Historical fixtures such as the marble wainscoting and period-appropriate lights have been recreated, Pachala said, but the terrazzo floors are original.

But these kinds of amenities also come with an appropriate price: Studios start at $995 with move-ins beginning in early November. Still, those are appropriate rates for the quality level, the views and the bragging rights of living in the former Freep location.

At 14-stories and 250,000 square feet, the limestone building feels spacious and elegant, retaining a lot of its original charm. The building’s architects and designers, who are in house at Bedrock, worked diligently with the state of Michigan on the remodel because The Press/321 is a Michigan Historical Site, Pachala said.

Yet there are many modern touches, such as the outdoor rooftop pool offering expansive views of the city on the seventh floor. The pool is still under construction but should be be completed later this year and will be ready for the Spring 2021 season. Designed with Myrtha Pools, a world-leader in the aquatics industry, the pool will have a stainless steel structural base with comfortable soft foam flooring. When complete, The Press/321 will boast the second outdoor pool in Detroit’s Central Business District.

The common areas have the same kind of Internet connection as the rest of the building, allowing people who work from home to get out of their apartments and to work in these open areas, Pachala said. There also are conference rooms for Zoom meetings and the like.

In addition, Bedrock has partnered with Dasher Lawless LLC and AUTOParkit to develop the Midwest’s first fully autonomous garage in the basement of The Press/321. The build out of the garage will be complete mid-2021 and will be available for residential and commercial use.

Bedrock acquired the property in 2016 after multiple owners unsuccessfully tried to revive it. The Free Press was there with its printing press from 1925 through 1998, when it moved into The Detroit News’s building at 615 W. Lafayette.