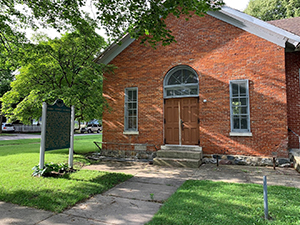 The grant funds will hire a preservation consultant to complete a survey and National Register of Historic Places nomination for the Ferry Street District in Niles, established around 1846, less than 10 years after Michigan achieved statehood.

“The African American community in Niles is among the oldest in the state. The neighborhood continues to be a home and gathering place for this community, anchored by two churches, a masonic lodge and the Ferry Street School,” said Michigan’s State Historic Preservation Officer Mark A. Rodman. “This cultural history will resonate as part of the National Register nomination, which in turn will enable other benefits such as access to the new State Historic Preservation Tax Credit program.”

The Ferry Street neighborhood consists of an eight-block area of approximately 30 resources.

The neighborhood was the site of Michigan’s first African American Freemason Society lodge (Harrison Lodge No. 6) founded in 1857.

Today, it includes the Ferry Street School, a one-room schoolhouse constructed in 1867 for African American children, the Prince Hall Masonic Lodge building, and is home to two church congregations, the Second Baptist Church (today the Mt. Calvary Baptist Church), founded at the corner of Sixth and Ferry Streets in 1849, and the Franklin AME Church on Sycamore Street established in 1888. Houses fill the surrounding blocks just to the northeast of downtown.

The Ferry Street District was home to a number of African American families that made significant contributions to Michigan’s history. Photographs of some of the homes in the district were included in the Michigan Manual of Freedmen’s Progress published in 1915 as part of a national exhibition to showcase the accomplishments of African Americans.

One of Ferry Street’s most notable residents was Lottie Wilson, the first African American graduate of the School of the Art Institute of Chicago, whose childhood home still stands in the district. A newspaper report from the period states that her father used their living room as a gallery to display her paintings. In 1902 Wilson’s painting of Abraham Lincoln and Sojourner Truth was chosen by President Theodore Roosevelt to hang in the White House.  Lottie Wilson was also a suffragette who challenged the White-dominated movement by asking them to take up the cause of African American women and the discrimination they faced in public accommodations.

Other significant residents included Reverend John William Hackley, a former slave who settled there in 1848, and Isaac Burdine, an activist and educator.

The Niles History Center, under the leadership of Director Christina Arseneau, has been working to document oral histories of families that lived in the neighborhood and recently held an exhibit related to the neighborhood’s history.

“The Ferry Street area is rich in history and remains an active neighborhood with a church and resource center. The city’s Master Plan emphasizes history as a tool for revitalization,” said Niles History Director Christina H. Arseneau. “Documenting the untold stories here will contribute to pride of place for local residents and enhance placemaking efforts throughout the city of Niles.”

Niles is a Michigan Main Street Community and also participates in the Certified Local Government program, in partnership with the Michigan SHPO and National Park Service. Once listed in the National Register of Historic Places, the Ferry Street Historic District will join nearly 2,000 other National Register-designated places in Michigan.

The National Register is the official federal list of districts, sites, buildings, structures, and objects significant in American history, architecture, archaeology, engineering, and culture. National Register properties have significance in the history of their community, state, or the nation. Once listed in the National Register, properties are eligible for certain state and federal grants and incentives, among other things. The listing is honorary and is used to recognize and celebrate how the past plays a role in the future.

“There are endless American stories yet to be recognized on a national stage like the National Register of Historic Places. The Underrepresented Community Grant program provides our state, Tribal, and Certified Local Government partners the means to identify and nominate their most significant places and stories for the benefit of all,” said National Park Service Director Chuck Sams.

This funding is the latest in a series of competitive National Park Service grants awarded to the Michigan SHPO and partners to better document and tell African American stories across the state. The Underrepresented Community Grant program specifically works toward diversifying the nominations submitted to the National Register of Historic Places. Previous awards have largely focused on identifying and documenting sites of significance in the 20th Century Civil Rights movement. Eight National Register nominations and three survey projects are completed or underway based on the Civil Rights theme. The Ferry Street nomination will be the first targeted toward an earlier period of African American history in the state.

In 2020, the Michigan SHPO was awarded a $30,000 Underrepresented Community Grant to document and nominate two sites significant to the 20th Century African American Civil Rights movement in Detroit to the National Register of Historic Places. One of the sites, the Sojourner Truth Homes, will have its National Register nomination heard before the State Historic Preservation Review Board on May 20. This is the last step for a nomination before it is sent to the National Park Service for listing. The other site, the Orsel & Minnie McGhee House, will have its nomination go before the Review Board in September following the same process.