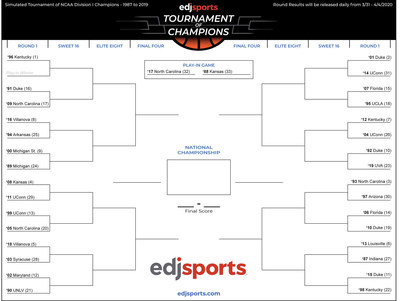 Printable brackets and current odds for each team to win their respective tournaments are available now at https://edjsports.com/ncaam/tournaments/.

EdjSports is keeping the dream alive for this year’s teams and creating new bragging rights for past champions, players, and fans.

The EdjSports Tournament of Champions is set up to determine the all-time best team from years past, since the introduction of the 3-point line. From 1987 to 2019, there have been 33 NCAA men’s basketball champions.

For this bracket, past championship teams are seeded according to the dominance they exhibited during their respective championship seasons. This bracket also includes a play-in game, to narrow the field to a 32-team bracket. Match up results are based on a single game simulation from the EdjSports’ Massey Ratings System, to determine which teams advance.

Winners from each round will be revealed daily beginning Tuesday March 31st with a Champion crowned on Saturday, April 3rd at https://edjsports.com/ncaam/tournaments/.

This virtual tournament is intended to determine the best team in 2020 and will be comprised of a traditional 68 team bracket sourced by Bracket Matrix using the EdjSports’ Massey Ratings System.

On Monday, April 6th EdjSports will unveil the winner of this virtual 2020 National Championship.

ABOUT US
Corp! Magazine and corpmagazine.com are the only statewide publications in Michigan dedicated to business owners and C-Suite leaders. The print and digital publications focus on best practices, trends, economic vitality and reporting on the day-to-day business transactions and plans across all business sectors. The publications and staff are dedicated to providing excellence in reporting important economic, growth, trend information and resources to businesses.
Contact us: [email protected]
FOLLOW US
© Copyright 2019 - Corp! Magazine
Corp! NewsletterStay informed on Michigan business news