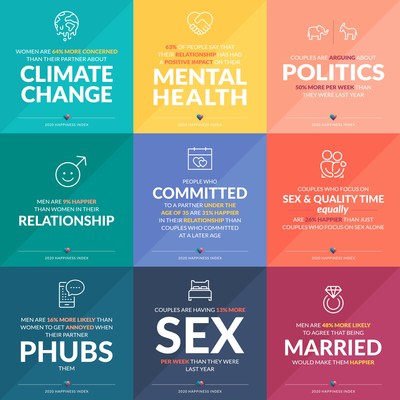 LOS ANGELES, Feb. 13, 2020 /PRNewswire/ — American couples, once again, personify the resiliency of happiness and love even during times of political uncertainty. The Third Annual “The Happiness Index: Love and Relationships in America,” a national report commissioned by America’s #1 trusted dating service, eharmony, and conducted by Harris Interactive, reveals that year-over-year, couples continue to report being happy in their relationship – but it requires some work.

As evidenced by the recent caucuses, American politics is messy, and opinions run rampant. Up 50 percent from last year, couples are more likely to argue about politics at least once a week in 2020. From a Presidential impeachment hearing to the political debates, this election year has drawn a divide among Americans. Luckily, this divide is not resulting in unhappier couples with 82 percent reporting to be happy in their relationships.

“As champions of love, we are thrilled to report that couples are taking time to focus on their relationship through actions like the quality time they spend together, sexual intimacy and viewing one another as equals,” said Gareth Mandel, COO of eharmony. “We’re also tracking new trends for couples of all ages, especially Millennials and Gen Z, regarding love, commitment, cultural concerns and happiness as these generations have grown up in the digital age where online dating has been omnipresent.”

In fact, while still a small sample, Gen Z is the happiest demographic with 90 percent report being happy in their relationship compared to Millennials (85 percent) and Gen X (81 percent). All three generations, Gen X (70 percent), Millennials (76 percent) and Gen Z (67 percent) report that being in love is more important than being married.

“No matter how they met, anyone in a relationship can confirm it takes work,” continues Mandel. “While cultural phenomena like elections can shine a spotlight on our perceived differences, it’s more important than ever to be considerate and conscious of your behaviors, and your partner’s behaviors. Think of it as relationship democracy.”

Not a big surprise, but couples who have sex daily or weekly are happier than those who have sex monthly or less. But sex alone is not enough – it’s focusing on both quality time and sex where couples report being happier (87 percent) compared to couples only focusing on either sex (69 percent) or quality time (82 percent).

Key takeaways from the 2020 study include:

Meet Me in the Bedroom
It’s clear that regular sex is an important part of happy and healthy relationships, and couples in 2020 are taking that advice to heart! In 2020, couples are significantly more likely to have sex at least five times a week, compared to 2019.

The Key to Happiness is Equality
Despite the constant barrage of negative news about the state of the world, American couples are as strong as ever. At least 82 percent of couples report being happy in their current relationship, consistent with past years’ numbers. Unsurprisingly, equality in a relationship is an important factor in happiness:

What’s Keeping Americans Up at Night?
In today’s divisive landscape, it seems like all anyone can talk about is politics. The same is true for couples, who are significantly more likely in 2020 than in 2019 to argue about politics at least once per week. Couples consider economic crisis (15 percent), climate change (19 percent) and terrorism (29 percent) to be the most serious possible threats to society, and women are significantly more likely than men to be concerned about climate change and terrorism, while men are more concerned about an economic crisis and epidemics.

End the Stigma
As Americans from all walks of life open up about their challenges with mental health publicly, people are more inclined than ever to share their own stories and seek help. Unsurprisingly, mental health issues take a toll on people’s happiness in general, but 63 percent of all couples say their relationship has had a positive impact on their mental health. While the spotlight can often be on young men as it relates to mental health, women are more likely to talk about or suffer from a mental health issue.

Men Want Love – Just Ask Them!
Contrary to outdated gender stereotypes, 71 percent of men feel at least very happy in their current relationship. Men are more likely than women to believe that being in love is more important than being married (70 percent vs. 64 percent) and are also more likely to believe that being married has made/would make their relationship happier (68 percent vs 46 percent). Men are stepping it up.

Want to learn more about the “The Happiness Index: Love and Relationships in America”? Visit http://bit.ly/happyinlove2020 and join the conversation on Facebook, Twitter and Instagram using #happyinlove.

About eharmony
Los Angeles, California-based eharmony helps people find meaningful relationships that enrich their lives. Founded in 2000, eharmony is a pioneer in creating highly compatible relationships based on key dimensions of personality that predict the most compatible, highly successful, long-term relationships. eharmony operates in the United States, Canada, the United Kingdom and Australia. For more information visit www.eharmony.com or download the app available on both iOS and Android.

ABOUT US
Corp! Magazine and corpmagazine.com are the only statewide publications in Michigan dedicated to business owners and C-Suite leaders. The print and digital publications focus on best practices, trends, economic vitality and reporting on the day-to-day business transactions and plans across all business sectors. The publications and staff are dedicated to providing excellence in reporting important economic, growth, trend information and resources to businesses.
Contact us: [email protected]
FOLLOW US
© Copyright 2019 - Corp! Magazine
Corp! NewsletterStay informed on Michigan business news