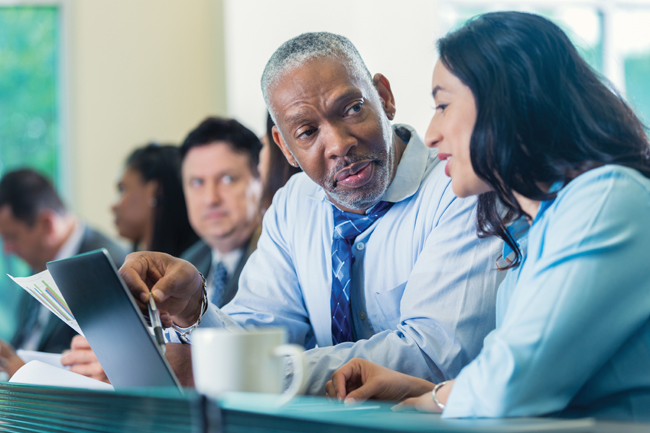 After earning her BS degree, Nora Swart started as a teller at a small community bank in Michigan’s Upper Peninsula, never expecting it would become her career. But with careful investments in herself and the business, Swart moved up – and up and up a few more times.

Swart stuck around for the past 27 years for a variety of reasons, and the main one is that she found an organization that was compatible with her own values and allowed her to be herself within Lake Michigan Credit Union. And she credits her intrinsic motivation and the credit union’s commitment to its employees for her longevity.

Having that connection between everyone from the tellers to the CEO on company culture, member service and long-term goals is key to the credit union’s success, Swart said. That means its human resources and Organizational Development departments in tandem need to help bolster that connection – and that means everything to making sure Lake Michigan grows as it could and should, she added.

“(In HR), you have to be that bridge between your HR practices and the business strategy,” Swart said. “We all have a choice about what kind of HR/OD team we want to be and how we work with the organization, right down to whether or not we want to be strategic partners and to understand what that means. If so, we need to have a voice and demonstrate our value to the organization. And as a leader in HR/OD, it’s important to provide our staff with opportunities to be strategic, not just order takers. It’s equally important to help staff understand how their role contributes to the overall success of the organization.

The best way to make executives aware of what’s happening in the HR department is layered, Swart said, but it has several simple principles. First, the HR staff really should know the business from every angle and every detail.

“We are all working toward the same thing, from the C-Suite to the HR department to the employees,” Swart said.

A great example of this happened about a decade ago when Lake Michigan experienced a heavy growth surge. Add in an acquisition, and there were many new people working for the credit union. The CEO expressed concern that new hires were not understanding who LMCU was culturally as an organization and asked Swart to lead a strategic initiative linked to culture.

Swart founded a committee to talk it over, surveyed staff and held focus groups from which they collectively decided Lake Michigan needed an internal culture program. Once a definition for culture was developed by senior leaders, town hall meetings were held to ask staff at every level if they could get behind what Lake Michigan stood for as a business. It helped connect people in real and meaningful ways, Swart said.

“Our culture is our DNA; it’s our heartbeat,” Swart said.

Second, you have to be in the important meetings and have a relationship professionally with everyone who is hired in and everyone who is running the company. If you don’t know someone, whether it is a member of the C-Suite or the new IT person, then you cannot help them understand the culture, where the business is headed or how their jobs plays a key role in making sure Lake Michigan is successful, Swart said.

Swart and her team do this through everyday means like chatting over the water cooler to going to executive meetings to participating in executive planning sessions. Her staff gets to know each business unit, what skills they need from their workers and what each position can bring to the team.

Third, you need collaboration between executives, the HR department and employees. The HR team needs to develop processes that aid employees who want to grow within the organization. That means understanding how their job works, how they work and how to find the right skills as well as the best skills for every opening.

HR also needs to have leadership paths for employees, so they can clearly see how their role is important in every way to the company’s success. That way, they carry that desire to improve the business along with themselves as they rise through the ranks. These paths are developed though the Organizational Development group.

“I started as a teller, and that’s where I learned so much,” Swart said. “But you’ve gotta get into it to really learn everything you can and get to know the company. … All the little things add up to big things.”