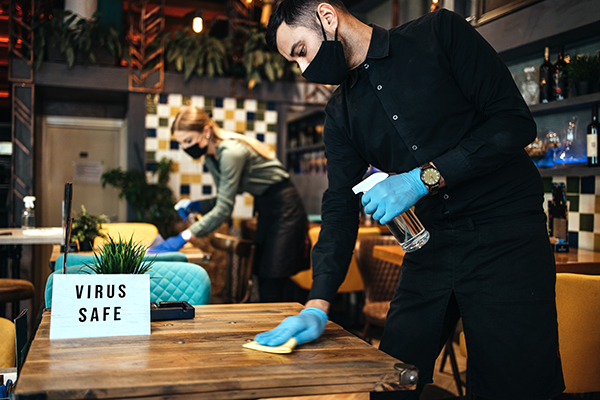 Alyssa Sylvester was born with asthma. She’s lived with it all her life.

But more than two years after the pandemic began, day in and day out, Sylvester still heads to her job as a barista at Groundswell Coffee Roasters in Chicago to make lattes, espressos and plain jane black coffee for customers — understanding the risk and putting up with customers who aren’t happy with the return of Chicago’s mask ordinance or a new rule that patrons at restaurants, coffee shops and bars must show proof of vaccination in the city.

“Putting up with the crazy,” as Sylvester calls it, and the strain of being under-staffed is one thing. But daily health anxiety is another thing entirely. And the 30-year-old Milwaukee native understands the true risk that COVID-19 can be: In November, the pandemic took her grandfather.

“I understand people not wanting to come out and do the same jobs. But at the same time, I have to still make money to survive.

“It’s unfortunate I have to risk my life to survive, and that’s not taken in mind by the higher-ups,” Sylvester said of elected leaders. “I’d much rather them lock down the city again and wipe this out and get people healthy than continue on the way that we are.”

And while President Joe Biden has said health and safety are important, he has also said that keeping businesses open and schools in class is critical. With that in mind, the Centers for Disease Control and Prevention shortened the quarantine period for people infected with COVID-19 from 10 days to five in late December, saying a longer isolation period would be too disruptive to society.

Now, restaurants, grocery stores, the trucking industry and schools staying open through the current surge have all been hit hard by Omicron, and the virus is disrupting everything once again.

Essential services are all being hit hard as the spread of the Omicron variant infects workers, ripples through the supply chain and takes a bite out of food and beverage supply across the country.

Grocery stores nationwide often are missing key items that customers are used to having as many workers in the food and beverage industry call in sick and as producers and the service economy still struggle to find enough workers to meet consumer demand.

Nationwide, there were more than 800,000 new daily cases at the end of last week. In Michigan, at the peak of Omicron’s spread, nearly 50,000 cases a day were infecting state residents, according to CDC data. Cases have been trending down slightly in recent days, but for many parts of the country, Omicron has not yet reached peak levels of infection, U.S. Surgeon General Vivek Murthy warned early this week.

“The challenge is that the entire country is not moving at the same pace,” Murthy said in a recent interview on CNN’s “State of the Union.” He added that “we shouldn’t expect a national peak in the coming days.”

Declining cases in the state have offered a glimmer of hope. But for the country, “The next few weeks will be tough,” Murthy said.

Thousands of airline workers called in sick over the past four weeks, with winter snow and sick employees spurring flight cancellations across the country.

Many states, including Ohio, are meanwhile facing a tough search for enough snowplow and salt-truck drivers as winter deepens, the Columbus Dispatch reported. And it’s not just truckers who keep winter roads clear: the U.S. is dealing with a shortage of more than 80,000 truck drivers of all kinds, according to an American Trucking Associations estimate.

Add to that all the labor, supply chain and Omicron disruptions, and the trucking industry has a tough few weeks ahead too.

“Because of this intense pressure, the capacity has been stretched thin and then you start having delays and you have a slowdown,” Jean-Paul Rodrigue, a professor of transport geography, told Vox News. “All of this creates a domino effect, which makes the shortage of drivers even more salient than before.”

That’s been having an impact on grocery retailers’ ability to keep store shelves stocked with everything that’s usually available, in addition to labor demand continuing to outpace supply, other supply chain problems, product shortages and labor disruptions spurred by the Omicron surge.

In a recent survey, some stores were operating with “less than 50 percent of their normal workforce capacity” in the past several weeks, Jim Dudlicek, communications director for the National Grocers Association, said in an email.

The National Grocers Association is a trade group with 1,500 members representing retail and wholesale grocers.

Dudlicek said that product availability and inflation coupled with labor supply and trucking disruptions have created “a perfect storm” that will likely continue to lead to “sporadic disruptions in certain product categories” that grocery stores have grappled with over the past year and a half.

“The prevalence of the omicron variant in both vaccinated and unvaccinated populations, coupled with the lack of available testing resources, has further contributed to current staffing challenges,” Dudlicek continued.

He added that the association is encouraging employees who haven’t gotten vaccinated to do so and has asked federal and state governments to prioritize testing supplies and offer flexibility on COVID-19 mandates.

Andrew Hunter, a senior economist at Capital Economics, told CBS News that roughly 5 million U.S. residents could be at home sick or isolating after possible exposure at the peak of Omicron. That could comprise about 2 percent of the country’s workforce.

But for frontline workers like Sylvester in Chicago, they still have to show up to work day after day despite the health risks.

“It’s been two years of this, and those two years set me back, definitely, in many ways,” she said. “I’m just trying to reevaluate what normal is, and what that means with me functioning through the world.”

Teachers across the country have to soldier on, too, often in-person, after years of classroom disruptions and the switch in many states from digital learning back to brick-and-mortar instruction.

Keyonna Payton, a teacher on Chicago’s south side at Park Manor Elementary School — a school that was “devastated” by the pandemic after the deaths of two parents, according to the Chicago Teachers Union — is back at work, trying to stay as safe as possible even though she has an immunocompromised 6-year-old and a husband with pre-existing health conditions at home.

Chicago schools were canceled for five days earlier in January until the union and mayor were able to reach a deal last week over COVID-19 safety protocols.  The union wanted a return to remote instruction out of health concerns from spiking Omicron cases in Chicago and nationwide. Teachers agreed to come back after the city vowed to offer KN95 masks to all students and expand testing in a compromise.

Payton says those masks still haven’t arrived for students at her school, and that several classes have already had to be flipped at Park Manor Elementary after five students tested positive following the return to classrooms.

Luckily, Payton said she hasn’t fallen sick with the virus yet. But she said it remains a concern for her and her family.

“This variant is still moving rapidly fast and through the schools,” Payton said. “It is not always just a little cold or just a little flu. Nobody wants to get the flu. It’s something we need to really take seriously and continue to make sure we’re doing enough precautions to prevent it.”