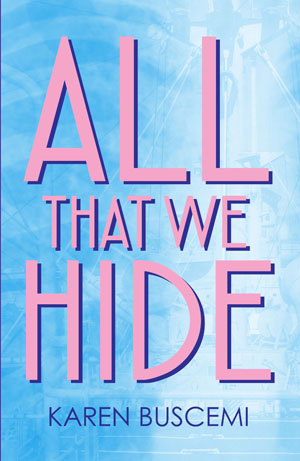 Being creative is a release for Rochester Hills resident Karen Buscemi – she takes award-winning photography as well as works in fashion, helping people create beautiful clothing and accessories so they look and feel their best.

One of her top passions is writing. She works both in fiction and nonfiction, and her latest work is one that captured her imagination from the start, Buscemi said.

Buscemi will celebrate the release of her third novel, All That We Hide, a love story with a mystery set in a tuberculosis sanitorium in 1952, with a book release party from 6-8 p.m. December 4 at Dolce MODA in Birmingham. The festive party will include cocktails, music, shopping and a book signing. Books will be available for sale.

Mystery story
Buscemi was fascinated with the extensive research she did for the book, especially understanding what it was like to live in a tuberculosis sanitorium – as patients stayed for six to 12 months on average – as well as the World War ll research necessary to create the main character’s missing father’s mysterious life.

The author has also penned the novels “The Makeover” (Starryeyed Press), “Saturday Nights at the God Café” (CreateSpace), and two nonfiction titles: “Split In Two: Keeping It Together When Your Parents Live Apart” (Orange Avenue Publishing/Zest Books); and “I Do, Part 2: How to Survive Divorce, Co-Parent Your Kids, and Blend Your Families Without Losing Your Mind” (Norlights Press). She’s also had articles published in Women’s Health, Self, The Huffington Post, Figure, Successful Living and The Detroit News.

In addition to being a wife and mother of two sons, Buscemi also owns a sewing factory in Pontiac called Detroit Sewn, and is the founder and president of the nonprofit Detroit Garment Group.

The book launch party is open to the public.